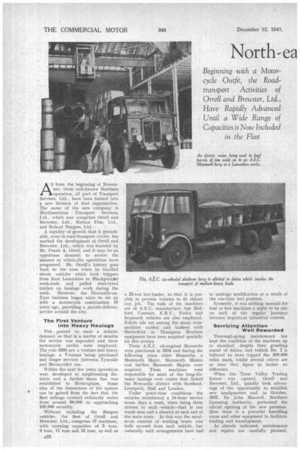 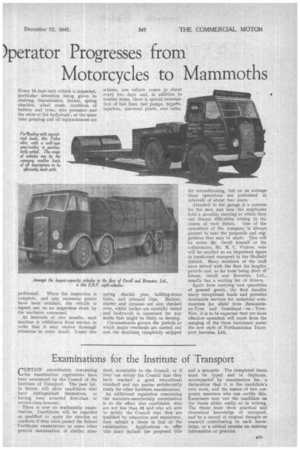 Page 24, 12th December 1941 — North-ea
Close
Noticed an error?
If you've noticed an error in this article please click here to report it so we can fix it.
Keywords : Orrell

)perator Progresses from Motorcycles to Mammoths

Beginning with a Motorcycle Outfit, the Roadtransport Activities of Orrell and Brewster, Ltd., Have Rapidly Advanced Until a Wide .Range of Capacities is Now Included

A rapidity of growththat is gemarkable, even in road-transport circles, has marked the development of Orrell and Brewster, Ltd., which was founded by Mr. Frank A. Orrell, and it may be an opportune moment to review the manner in which.the operations have progressed. Mr. Orrell's history goes back to the time when he handled steam vehicles which took •trippers from East Lancashire to Blackpooljlat week-ends and pulled steel-tyred trailers on haulage work during the week. However, the Newcastle-onTyne business began when he set up with a motorcycle combination 16 years ago, providing a parcels-delivery service around the city.

The First Venture into Heavy Haulage

This proved to meet a definite demand, so that in a matter of months the service was expanded and three motorcycle outfits were employed. The year 1926 saw a venture into heavy haulage, a 7-tonner -being purchased and longer services (between Tyneside and Merseyside) run.

Within the next few years operations were developed in neighbouring districts and a further main line was established to Birmingham. Some idea of the dimensions of the system • can be gained from the fact that the fleet mileage covered ordinarily varies from around 90,000 to approaching 100,000 monthly.

Without including the Burgess vehicles, the fleet of Orrell and Brewster, Ltd., comprises 37 machines, with carrying capacities of 5 tons, 8 tons, 11 tons and 15 tons, as well as a 25-ton low-loader, so -that it is possible to provide vehicles to fit almost any job. The bulk of the machines are of A.E.C. manufacture, hut Bed ford, Comrner, Foden and Scaunnell vehicles are also employed. Edible oils are among the many commodities carried and tankers with • Butterfield or Thompson Brothers equipment have been acquired specially for this service.

Three AE.C. oil-engined Monarchs were purchased in 1934 and during the following years other Monarchs, a Mammoth Major, Mammoth Minors and further Mammoth Majors were acquired. These machines were responsible for most of the long-distance haulage over routes that linked the Newcastle district with Scotland, Liverpool, Hull and London.

Under peace-time conditions the vehicles maintained a 24-hour service seven days a week, there being three drivers to each vehicle—that is one trunk man and a shunter at each end of the main route. In this way the maxiittrim number of working hours was theri secured from each vehicle, but naturally such arrangements have had to 'undergo modification as a result of the war-time fuel position.

Formerly, it was nothing unusual for four or five machines a night to be run on each of the regular journeys between important industrial centres.

Servicing Attention • Well Rewarded Thorough-going maintenance has kept the condition of the machines up to standard, despite their gruelling round of duties, and vehicle No. 1 is believed to have topped the 500,000 miles mark, whilst several others are as near that figure as makes no difference.

When the Team Valley Trading Estate was opened, Orrell and Brewster, Ltd., quickly took advantage of the opportunity to establish new headquarters and, in October, 1937, Sir John Maxwell, Northern Licensing Authority, performed the official opening of the new premises. Here there is a powerful travelling crane and other equipment to facilitate loading and transhipment.

As already indicated, maintenance and repairs are carefully planned. performed. When the inspection is complete, and any necessary points have been rectified, the vehicle is signed out on an inspection sheet by the mechanic concerned.

At intervals of two months, each machine is withdrawn from service, in order that it may receive thorough attention in every detail. Under this spring shackle pins, holding-down bolts, and rebound clips. Battery, starter and dynamo are also checked over, whilst brakes are carefully tested , and bodywork is examined for any faults that might be likely to develop. Circumstances govern the periods at which major overhauls are carried out and the machines completely stripped for reconditioning, but on an average these operations are performed at intervals of about two years. • Attached to the garage is a canteen for the men and here the eniployees hold a monthly meeting at which they can discuss difficulties arising in the course of their duties. One of the executives of the company is always present to hear the proposals and suggestions that may be made. This will be either Mr. Orrell himself or his collaborator, Mr. M. C. Vickers, who will be recalled as an important figure in trunk-road transport in the Sheffield district. Many. members of the staff have served with the fleet for lengthy periods and, so far from being short of labour. Orrell and Brewster, Ltd., usually has a waiting list of drivers.

Apart from carrying vast quantities of general goods, the fleet handles many exceptional loads and provides invaluable services for industrial communities far afield from Newcastleon-Tyne and Gateshead on Tyne. Now, it is to be expected that yet more effective operation will result from the merging of the three businesses under the new style of Northumbrian Transport Services, Ltd.