"Ifs a first in transport history... 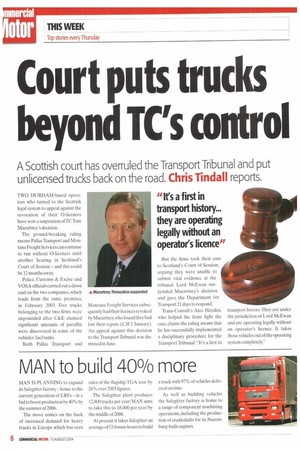 Page 6, 12th August 2004 — "Ifs a first in transport history...
Close
Noticed an error?
If you've noticed an error in this article please click here to report it so we can fix it.
Keywords : Law / Crime

they are operating legally without an operator's licence"

But the firms took their case to Scotland's Court of Session, arguing they were unable to submit vital evidence at the tribunal. Lord McEwan suspended Macartney's decision and gave the Department for Transport 21 days to respond.

Trans-Consult's Alec Hayden, who helped the firms fight the case, claims the ruling means that he has successfully implemented a disciplinary procedure for the Transport Tribunal: "It's a first in transport history. They are under the jurisdiction of Lord McEwan and are operating legally without an operator's licence. It takes those vehicles out of the operating system completely."