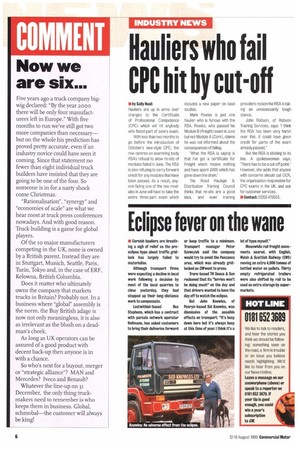 Page 8, 12th August 1999 — Now we are six...
Close
Noticed an error?
If you've noticed an error in this article please click here to report it so we can fix it.

Five years ago a truck company bigwig declared: "By the year 2000 there will be only four manufacturers left in Europe." With five months to run we've still got two more companies than necessary— but on the whole his prediction has proved pretty accurate, even if an industry novice could have seen it coming. Since that statement no fewer than eight individual truck builders have insisted that they are going to be one of the four. So someone is in for a nasty shock come Christmas.

"Rationalisation", "synergy" and "economies of scale" are what we hear most at truck press conferences nowadays. And with good reason. Truck building is a game for global players.

Of the io major manufacturers competing in the UK, none is owned by a British parent. Instead they are in Stuttgart, Munich, Seattle, Paris, Turin, Tokyo and, in the case of ERF, Kelowna, British Columbia.

Does it matter who ultimately owns the company that markets trucks in Britain? Probably not. In a business where "global" assembly is the norm, the Buy British adage is now not only meaningless, it is also as irrelevant as the blush on a deadman's cheek.

As long as UK operators can be assured of a good product with decent back-up then anyone is in with a chance.

So who's next for a buyout, merger or "strategic alliance"? MAN and Mercedes? Iveco and Renault?

Whatever the line-up on 31 December, the only thing truck. makers need to remember is who keeps them in business. Global, schmobal—the customer will always be king!