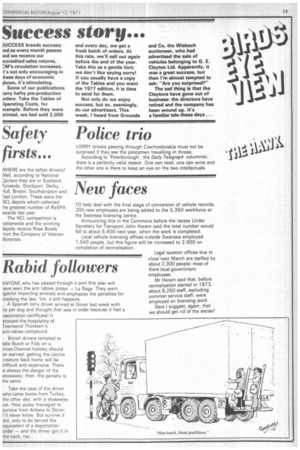 TO help deal with the final stage of conversion of vehicle records, 200 new employees are being added to the 5,350 workforce at the Swansea licensing centre Announcing this in the Commons before the recess Under Secretary for Transport John Horam said the total number would fall to about 5,400 next year, when the work is completed.

Local vehicle licensing offices outside Swansea employed 1,540 people, but this figure will be increased to 2,000 on completion of centralisation.

Local taxation offices due to close next March are staffed by about 2,300 people; most of them local government employees.

Mr Horam said that, before centralisation started in 1973, about 6,250 staff, excluding common service staff, were employed on licensing work. Dare I suggest, again, that we should get rid of the excise?