One Hears— That cats wifl coat you more. 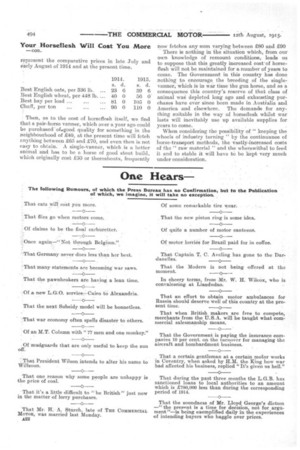 Page 4, 12th August 1915 — One Hears— That cats wifl coat you more.
Close
Noticed an error?
If you've noticed an error in this article please click here to report it so we can fix it.
Keywords : Pawnbroker, Retailing

That flies go when motors come.

Of claims to be the final carburetter. again—" Not through Belgium."

That Germany never does less than her best.

• 0 • That many statements are becoming war saws.

That the pawnbrokers are having a Jean time. Of a new L.G.O. servicee–Cairo to Alexandria.

That the next Subsidy model will be bonnetless.

That war economy often spells disaster to others.

Of mudguards that are only useful to keep the sun off.

That President Wilson intends to alter his name to Willsoon.

That one reason why some people are unhappy is the price of coal.

• —0- That it's a little difficult to "be British" just now in the matter of lorry purchases.

That Mr. H. A. Sturch. late of THE COMMERCIAL MOTOR, was married last Monday. A22 Of some remarkable tire wear.

That the new piston ring is some idea.

Of quite a number of motor canteens.

Of motor lorries for Brazil paid for in coffee.

That Captain T. C. Aveling has gone to the Dardanelles.

That the Modern is not being offered at the moment.

In cheery terms, from Mr. W, IL Wilcox, who is convalescing at Llandudno.

That an effort to obtain motor ambulances for Russia should deserve well of this country at the present time.

That when British makers are free to compete, merchants from the U.S.A. will be taught what commercial salesmanship means.

That the Government is paying the insurance companies 10 per cent, on the turnover for managing the aircraft and bombardment business.

That a certain gentleman at a certain motor works in Coventry, when asked by H.M. the King how war had affected his business, replied "It's given us hell."

That during the past three months the L.G.B. has sanctioned loans to local authorities to an amount which is 2780,000 less than during the corresponding period of 1914.

That the soundness of Mr. Lloyd George's dictum —" the present is a time for decision, not for argument "—is being exemplified daily in the experiences of intending buyers who haggle over prices.