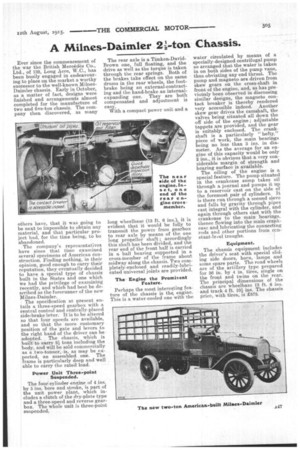 Page 17, 12th August 1915 — A Milnes-Daimler 2;-ton Chassis.
Close
Noticed an error?
If you've noticed an error in this article please click here to report it so we can fix it.

Ever since the commencement of the war the British Mercedes Co., Ltd., of 132, Long Acre, W.C., has been busily engaged in endeavouring to place on the market a worthy successor to the well-known MilnesDaimler chassis. Early in October, as a matter of fact, designs were finished and arrangements almost completed for the manufacture of two and five-ton chassis. The company then discovered, as many others have, that it was going to be next to impossible to obtain any material, and that particular project had, for the time being, to be abandoned.

The company's representatives have since that time examined several specimens of American construction. Finding nothing, in their opinion, good enough to carry their reputation, they eventually decided to have a special type of chassis built in the States and one which we had the privilege of exaniining recently, and which had best be described as the forerunner of the new Milnes-Daimler.

The specification at present entails a three-speed gearbox with a central control and centrally-placed side-brakeleter. It.is to be altered so that four speeds are available, and so that the more customary position of the gate and levers to the right hand of the driver can be adopted. The chassis, which is built to carry 21 tons including the body, and will be sold commercially as a two-tonner, is, as may be expected, an assembled one. The frame is particularly deep and well able to carry the rated load.

The four-cylinder engine of 4 ins. by 3 ins, bore and stroke, is part of the unit power plant, which includes a clutch of the dry-plate type and a three-speed and reverse gearbox. The whole unit is three-point suspended. The rear axle is a, Timken-DavidBrown one, full floating, and the drive as well as the torque is taken through the rear springs. Both of the brakes take effect on the same drums in the rear wheels, the footbrake being an external-contracting and the hand-brake an internal expanding one. They are both compensated and adjustment is easy.

With a compact power unit and a

long wheelbase (13 ft. 6 ins.), it is evident that it would be folly to transmit the power from gearbox to rear axle by means of the one long propeller shaft ; accordingly this shaft has been divided, and the rear end of the front half is carried in a ball bearing supported in a cross-Member of the frame about midway along the chassis. Two completely-enclosed and readily-lubricated universal joints are provided.

The Engine the Prominent Feature.

Perhaps the most interesting feature of the chassis is the, engine. This is a water-cooled one with the

water circulated by means of a specially-designed centrifugal pump so arranged that the water is taken in on both sides of the pump vane, thus obviating any end thrust. The pump and magneto are driven from skew gears on the cross-shaft in front of the engine, and, as has previously been observed in discussing similar designs, the magneto contact breaker is thereby rendered very accessible indeed. Another skew gear drives the camshaft, the valves being situated all down the off side of the engine ; adjustable tappets are provided, and the gear is suitably enclosed. The crankshaft is a, particularly "hefty" piece of work, the main bearings being no less than 3 ins, in diameter. As the average for an engine of this capacity would be only 2 ins., it is obvious that a very con. siderable margin of strength and bearing surface is available. The oiling of the engine is a special feature. The pump situated in the crankcase sump takes oil through a journal and pumps it up to a reservoir cast on the side of the foremost pair of cylinders. It is there run through a second sieve and falls by gravity through pipes cast integral with the cylinder, and again through others cast with the crankcase to the main bearings, thence flowing into the main crankcase and lubricating the connecting rods and other portions from ecnstant-le vel troughs.

The chassis equipment includes the driver's seat with special sliding side doors, horn, lamps and some spare parts. The road wheels are of the artillery type prepared for 36 in. by 4 in. tires, single on the front and twins on the rear. The principal dimensions of the chassis are wheelbase 13 ft. 6 ins. and track 4 ft. 101 ins. The chassis prio:\ with tires, is .R575.