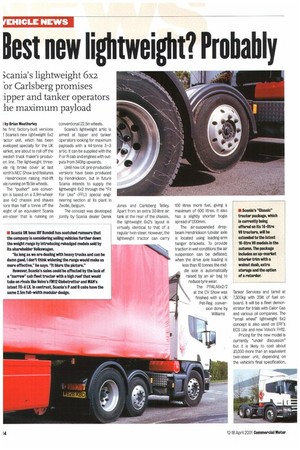 ;cania's lightweight 6x2 -or Carlsberg promises ipper and tanker operators he maximum payload i by Brian iVeatherley he first Factory-built versions f Scania's new lightweight 6x2 -actor unit, which has been eveloped specially for the UK larket, are about to roll off the wedish truck maker's producon line. The lightweight threexle rig broke cover at last icnth's NEC Show and features

The 'pusher" axle converion is based on a 3.9m-wheelase 4x2 chassis and shaves lore than half a tonne off the eight of an equivalent Scania evin-steer that is running on

Scania's lightweight artic is aimed at tipper and tanker operators looking for maximum payloads with a 44-tonne 3+3 artic. It can be supplied with the P or R cab and engines with outputs from 340hp upwards.

Until now UK pre-production versions have been produced by Hendrickson, but in future Scania intends to supply the lightweight 6x2 through the "Fit For Use" (FFL1) special engineering section at its plant in Zwolle, Belgium.

The concept was developed jointly by Scania dealer Derek Jones and Carlsberg Tetley. Apart from an extra 30-litre air tank at the rear of the chassis, the lightweight 6x2's layout is virtually identical to that of a regular twin-steer. However, the lightweight tractor can carry 1013 litres more fuel, giving a maximum of 600 litres. It also has a slightly shorter bogie spread of 1,100mm.

The air-suspended dropbeam Hendrickson tubular axle is located using leading-arm hanger brackets. To provide traction in wet conditions the air suspension can be deflated; when the drive axle loading is less than 10 tonnes the middle axle is automatically raised by an air bag to reduce tyre wear.

The P114L46x2/2 at the CV Show was finished with a UK Pet-Reg conversion done by Williams Tanker Services and tared at 7,300kg with 20Iit of fuel onboard. it will be a fleet demonstrator for trials with Calor Gas and various oil companies. The "small wheel" lightweight 6x2 concept is also used on ERF's ECS Lite and now Volvo's FH12.

Pricing for the new model is currently "under discussion" but it is likely to cost about £1,000 more than an equivalent twin-steer unit, depending on the vehicle's final specification.