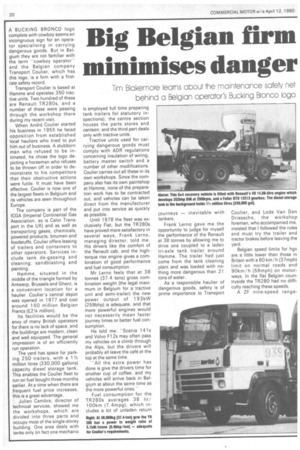 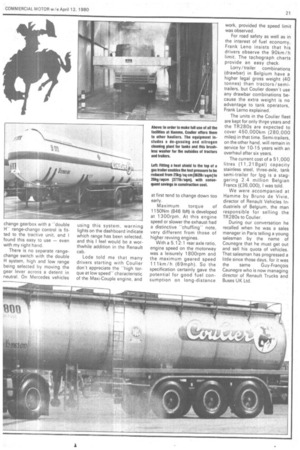 A BUCKING BRONCO logo complete with cowboy seems an incongruous sign for an operator specialising in carrying dangerous goods. But in Belgium they are not familiar with the term "cowboy operator" and the Belgian company Transport Coulier, which has this logo, is a firm with a firstrate safety record.

Transport Coulier is based at Hamme and operates 350 tractive units. Two hundred of these are Renault TR280s, and a number of these were passing through the workshop there during my recent visit.

When Andre Coulier started his business in 1955 he faced opposition from established local hauliers who tried to put him out of business. A stubborn man who refused to be intimated, he chose the logo depicting a horseman who refuses to be thrown off in order to demonstrate to his competitors that their obstructive actions were futile. It must have been effective: Coulier is now one of the largest fleets in Belgium and its vehicles are seen throughout Europe.

The company is part of the ICGA (Imperial Continental Gas Association, as is Calor Transport in the UK) and as well as transporting gases, chemicals, powered products, bitumen and foodstuffs, Coulier offers leasing of trailers and containers to other operators. Services include tank de-gassing and cleaning, sandblasting and painting.

Hamme, situated in the middle of the triangle formed by Antwerp, Brussels and Ghent, is a convenient location for a haulier. Coulier's central depot was opened in 1977 and cost around 150 million Belgian Francs (E21/4 million).

Its facilities would be the envy of many British operators for there is no lack of space, and the buildings are modern, clean and well equipped. The general impression is of an efficiently run operation.

The yard has space for parking 250 trailers, with a 11/2 million litres (330,000 gallons) capacity diesel storage tank. This enables the Coulier fleet to run on fuel bought three months earlier. At a time when there are frequent fuel price increases, this is a great advantage.

Julien Cambre, director of technical services, showed me the workshops, which are divided into three parts and occupy most of the single-storey building. One area deals with tanks only (in fact one mechanic is employed full time preparing tank trailers for statutory inspections); the centre section houses the parts stores and canteen; and the third part deals only with tractive units.

Tractive units used for carrying dangerous goods must comply with ADR regulations concerning insulation of wiring, battery master switch and a number of other modifications. Coulier carries out all these in its own workshops. Since the company also has its own paintshop at Hamme, none of the preparation work has to be contracted out, and vehicles can be taken direct from the manufacturer and put into service as quickly as possible.

Until 1978 the fleet was exclusively Fiat, but the TR280s have proved more satisfactory in several ways, Frank Lerno, managing director, told me. His drivers like the comfort of the Renault cab, and the hightorque rise engine gives a combination of good performance and fuel consumption. • Mr Lerno feels that at 38 tonnes (37.4 tons) gross combination weight (the legal maximum in Belgium for a tractive unit and semi-trailer) the new power output of 193kW (259bhp) is adequate, and that more powerful engines would not necessarily mean faster journey times or better fuel consumption.

He told me: "Scania 141s and Volvo Fl 2s may often pass my vehicles on a climb through the Alps, but the drivers will probably all leave the café at the top at the same time.

"All the extra power has done is give the drivers time for another cup of coffee, and my vehicles will arrive back in Belgium at about the same time as the more powerful ones."

Fuel consumption for the TR280s averages 38 lit/ 100km (7.4mpg), which includes a lot of unladen return journeys — inevitable with tankers.

Frank Lerno gave me the opportunity to judge for myself the performance of the Renault at 38 tonnes by allowing me to drive one coupled to a laden tri-axle tank trailer around Hamme. The trailer had just come from the tank cleaning plant and was loaded with nothing more dangerous than 21 tons of water.

As a responsible haulier of dangerous goods, safety is of prime importance to Transport Coulier, and Lode Van Den Driessche, the workshop foreman, who accompanied me, insisted that I followed the rules and must try the trailer and tractor brakes before leaving the yard.

Belgian speed limits for hgv are a little lower than those in Britain with a 60 km/h (37mph) limit on normal roads and 90km /h (56mph) on motorways. In the flat Belgian countryside the TR280 had no difficulty reaching these speeds.

A ZF nine-speed range change gearbox with a "double H" range-change control is fitted to the tractive unit, and I found this easy to use — even with my right hand.

There is no separate rangechange switch with the double H system, high and low range being selected by moving the gear lever across a detent in neutral. On Mercedes vehicles using this system, warning lights on the dashboard indicate which range has been selected, and this I feel would be a worthwhile addition in the Renault cab.

Lode told me that many drivers starting with Coulier don't appreciate the "high torque at low speed" characteristic of the Maxi-Couple engine, and at first tend to change down too early.

Maximum torque of 1150Nm (846 lbft) is developed at 1300rpm. At this engine speed or slower the exhaust had a distinctive "chuffing" note, very different from those of higher revving engines.

With a 5.12:1 rear axle ratio, engine speed on the motorway was a leisurely 1800rpm and the maximum geared speed 111km / h (69mph). So the specification certainly gave the potential for good fuel consumption on long-distance work, provided the speed limit was observed.

For road safety as well as in the interest of fuel economy, Frank Leno insists that his drivers observe the 90km /h limit. The tachograph charts provide an easy check.

Lorry/trailer combinations (drawbar) in Belgium have a higher legal gross weight (40 tonnes) than tractors/semitrailers, but Coulier doesn't use any drawbar combinations because the extra weight is no advantage to tank operators, Frank Lerno explained.

The units in the Coulier fleet are kept for only thrte years and the TR280s are expected to cover 450,000km (280,000 miles) in that time. Semi-trailers, on the other hand, will remain in service for 10-15 years with an overhaul after six years.

We were accompanied at Hamme by Bruno de Vivie, director of Renault Vehicles Industriels of Belgium, the man responsible for selling the TR280s to Coulier.

During our conversation he recalled when he was a sales manager in Paris telling a young salesman by the name of Counegre that he must get out and sell his quota of vehicles. That salesman has progressed a little since those days, for it was the same Guy-Francois Caunegre who is now managing director of Renault Trucks and Buses UK Ltd.