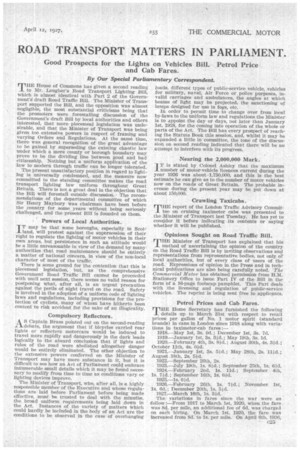 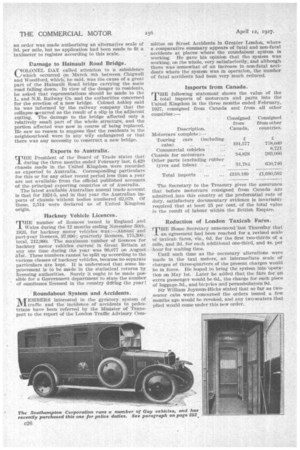 Page 47, 12th April 1927 — ROAD TRANSPORT MATTERS IN PARLIAMENT.
Close
Noticed an error?
If you've noticed an error in this article please click here to report it so we can fix it.
Keywords : Transport, Road Transport, Traffic Law, Road Safety, Traffic

Good Prospects for the Lights on Vehicles Bill. Petrol Price and Cab Fares.

rr HE House of Commons has given a second reading 1 to Mr. Laugher's Road Transport Lighting Bill, which is almost identical with Part 2 of the Government' S draft Road Traffic Bill. The Minister of Transport supported the Bill, and the opposition was almost negligible, the most substantial criticisms being that the promoters were forestalling discussion of the Government's draft Bill by local authorities and others interested, that more piecemeal legislation was undesirable, and that the Minister of Transport was being given too extensive powers in respect of framing and varying Orders and Regulations. At the sam6 time, there was general recognition of the great advantage to be gained by superseding the existing chaotic law under which a mere county or borough boundary may prove to be the dividing line between good and bad citizenship. Nothing but a uniform application of the law to modern through traffic can be longer tolerated.

The present unsatisfactory position in regard to lighting is universally condemned, and the measure now committed to the standing committee makes the road transport lighting law uniform throughout Great Britain. There is not a great deal in the objection that the Bill will forestall outside discussion. The recommendations of the departmental committee of which Sir Henry Maybury was chairman have been before the country for some years without being seriously challenged, and the present Bill is founded on them.

TT may be that some boroughs, especially in Scot

land, will will protest against the supersession of their right to regulate the lighting of motor vehicles in their own areas, but persistence in such an attitude would be a little unreasonable in view of the demand by many authorities that road maintenance should be entirely a matter of national concern, in view of the non-local character of most of the traffic.

There is some ground for the contention that this is piecemeal legislation, but, as the comprehensive Government Road Traffic Bill cannot be proceeded with until next session, there seems no valid reason for postponing what, after all, is an urgent precaution against the perils of night travel on the road. Safety is involved in the adoption of a uniform code of lighting laws and regulations, including provisions for the protection of cyclists, many of whom have hitherto been content to risk accident for the sake of an illogicality.

AS Captain Brass pointed out on the second-reading debate, the argument that if bicycles carried rear lights or reflectors motorcars would be induced to travel more rapidly and dangerously in the dark leads logically to the absurd conclusion that if lights and rules of the road were abolished altogether danger would be entirely eliminated. The other objection to the extensive powers conferred on the Minister of Transport may have more substance in it, but it is difficult to see how an Act of Parliament could embrace innumerable small details which it may be found necessary to modify from time to time as conditions vary or lighting devices improve.

The Minister of Transport, who, after all, is a highly responsible member of the Executive and whose regulations are laid before Parliament before being made effective, must be trusted to deal with the minutlie, the broad uniform requirements being laid down in the Act. Instances of the variety of matters which could hardly be included in the body of an Act are the conditions to be observed in the case of overhanging loads, different types of public-gervice vehicle, vehicles for military, naval, Air Force or police purposes, invalid carriages and ambulances, the angles at which beams of light may be projected, the sanctioning of lamps designed for use in fogs, etc.

In order to permit time to change over from local by-laws to the uniform law and regulations the Minister is to appoint the day or days, not later than January 1st, 1928, for the coming into operation of the whole or parts of the Act. The Bill has every prospect of reaching the Statute Book this session, and, whilst it may be expanded a little in committee, the tone of the discussion on second reading indicated that there will be no attempt to interfere with its progress.

1T is stated by Colonel Ashley that the maximum number of motor-vehicle licences current during the year 1926 was about 1,730,000, and this is the best estimate he can give as to the number of motor vehicles now on the roads of Great Britain. The probable increase during the present year may be put clown at about 150,000.

MHE report of the London Traffic Advisory Commit1 tee on cruising taximeter cabs was presented to the Minister of Transport last Tuesday. He has yet to consider it before indicating its contents or saying whether it will be published.

THE Minister of Transport has explained that his method of ascertaining the opinion of the country on the Road Traffic Bill is by inviting observations and representations from representative bodies, not only of local authorities, but of every class of users of the road. Expressions of opinion in the Press and in technical publications are also being carefully noted. The Commercial Motor has obtained permission from H.M. Stationery Office to issue Part IV of the Bill in the form of a 16-page foolscap pamphlet. This Part deals with the licensing and regulation of public-service vehicles. The reprint is being sent free to applicants.

THE Home Secretary has furnished the following details up to March 31st with respect to retail prices per gallon of No. 1 motor spirit (standard brands) in cans in London since 1918 along with variations in taximeter-cab fares:—

COLONEL DAY called attention to a subsidence which occurred on March 8th between Chigwell and Woodford, which, he said, was the cause of a great part of the Hainanlt Road bridge carrying the main road falling down. In view of the danger to residents, he asked that representations should be made to the L. and N.E. Railway Co. and the authorities concerned for the erection of a new bridge. Colonel Ashley said he was informed by the railway company that the collapse qii!curred as the result of a slip in the adjacent cutting. The damage to the bridge affected only a relatively small part of the whole structure, and the portion affected was now in course of being replaced. He saw no reason to suppose that the residents in the neighbourhood were in any wri.y endangered or that there was any necessity to construct a new bridge.

THE President of the Board of Trade states that during the three months ended February last, 6,429 chassis made in the United Kingdom were recorded as exported to Australia. Corresponding particulars for this or for any other recent period less than a year are not available from the official published accounts of the principal exporting countries or of Australia.

The latest available Australian annual trade account is that for 1924-5, and in that year the Australian imports of chassis without bodies numbered 62,070. Of these, 2,514 were declared as of United Kingdom origin.

THE number of licences issued in England and Wales during the 12 mouth ending November 30th, 1926, for hackney motor vehicles was :—Annual and part-year licences, 37,690; quarterly licences, 175.300; total, 212,990. The maximum number of licences for hackney motor vehicles current in Great Britain at any one time during the year was 99,077 on August 31st, These numbers cannot be split up according to the various classes of hackney vehicles, because no separate particulars are kept. It is understood that some improvement is to be made in -the statistical returns by licensing authorities. Surely it ought to be made possible for a Government department to state the number of omnibuses licensed in the country dulling the year !

THE following statement shows the value of the total imports of motorcars and parts into the United Kingdom in the three months ended February, 1927, consigned from Canada and from all other countries:—

The Secretary to the Treasury gives the assurance that before motorcars consigned from Canada arc admitted into this country at the preferential rate of duty, satisfactory documentary evidence is invariably required that at least 25 per cent. of the total value is the result of labour within the British Empire, Reduction of London Taxicab Fares.

PTIHE Home Secretary announced last Thursday that _L an agreement had been reached for a revised scale of taxicab fares, • viz., 6d. for the first two-thirds of a mile, and 3d. for each additional one-third, and 4s. per -hour for waiting time.

Until such time as the necessary alterations were made in the taxi meters, an intermediate scale of charges of three-quarters of the present charges would be in force. He hoped to bring the system into 'operation on May 1st. Later he added that the fare for an extra passenger would be 6d., the charge for each piece of luggage 3c1., and bicycles and perambulators 9d.

Sir William Joynson-Hicks stated that so far as twoseater cabs were concerned the orders issued. a few months ago would be revoked, and any two-seaters that plied would come under this new order.