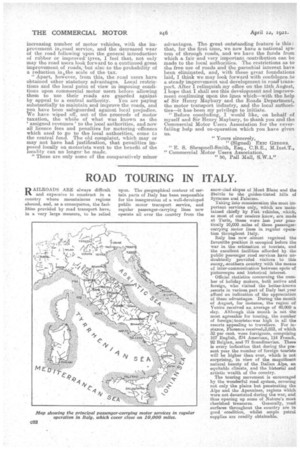 Page 18, 12th April 1921 — ROAD TOURING IN ITALY.
Close
Noticed an error?
If you've noticed an error in this article please click here to report it so we can fix it.

RAILROADS ARE always difficult and expensive to construct in a country where mountainous regions abound, and, as a. consequence, the facilities provided by mad transport have, in a very large measure, to be relied upon. The geographical contour of certain parts of Italy has been responsible for the inauguration of a well-developed public motor transport service, and regular paesenger-carrying lines now operate all over the country from the snow-clad slopes of Mont Blanc and the Stelvio to the golden-tinted hills of Syracuse and Palermo.

Taking into consideration the most important, services only, which are 'maintained chiefly by Fiat vehicles, which, as most of our readers know, are made at Turin, these were last year practically 10,000,miles of these passengercarrying motor lines irt regular operation throughout Italy. Italy lies now _almost regained the favoUrite position it occupied before the war in the estimation oi tourists, and the excellent facilities afforded by the public passenger road services have undoubtedly provided visitorst to this sunny, southern country with the means of inter-communication between spots of picturesque and historical interest.

Official statistics concerning the number of holiday makers, both native and foreign, who visited the better-known resorts in various part of Italy last year afford an indication of the appreciation of these advantages. During the month of August, for instance, the region of Venice received an average of 40,000 a day. Although this month is not the must agreeable for touring, the number of foreign“oaristss was high in all the resorts appealing to travellers. For instance, Florence.received$3,883, of which 32 per cent. were foreigners' oomprising 107 English, 574 American, 114 French, 92 Belgian and 77 Scandinavian. There is every indication that during the present year the number of foreign tourists will be higher than ever, which is not surprising, in view of the magnificent natural beauty of the Italian Alps, an equitable climate, and the historial and artistic wealth of the country.

The touring movement is encouraged by tbe wonderful road system, covering not only the plains hut penetrating the Alps and the Apennines, regions which were not devastated during the war, and thus opening up some of Nature's most cherished treasures. Generally, road surfaces throughout the country are in good condition, whilst ample petrol supplies are readily obtainable.