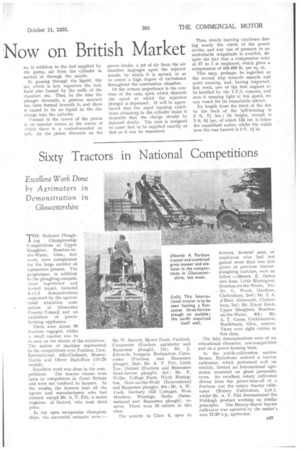 Excellent Work Done by A grimotors in Demonstration in Gloucestershire

• There were about 60 tractors engaged, whilst a small number was to be seen on the stands of the exhibition. The makes of machine represented in the competitions were Fordson, Case, International, Allis-Chalmers, MasseyHarris and Oliver Hart-Parr (18/28 model).

Excellent work was done in the com petitions. The tractor classes were open to competitors in Great Britain and were not confined to farmers. In the results, the farmers beat all the agents and manufacturers who had entered, except Mr. A. V. Fitt, a motor engineer. of Oxford, who took third place.

The field demonstrations were of an educational character, non-competitive and on a power-farming basis.

In the arable-cultivation section Messrs. Nicholsons entered a tractor cultivator, which performed well on stubble, behind an International agrimotor mounted on giant pneumatic tyres. An excellent rotary cultivator driven from the power-take-off of a Fordson was the rotary tractor ctiltivator (Rotary Cultivators, Ltd.), whilst Mr. A. V. Fitt demonstrated the Fishleigh product working on similar principles. The Massey-Harris tractor cultivator was operated by the maker's own 12-20 h.p. agrimotor.