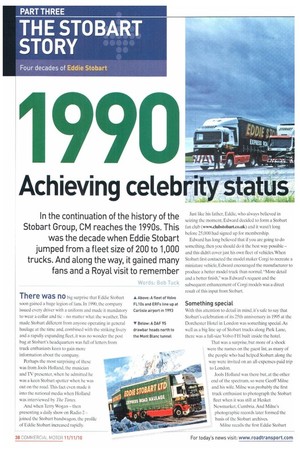 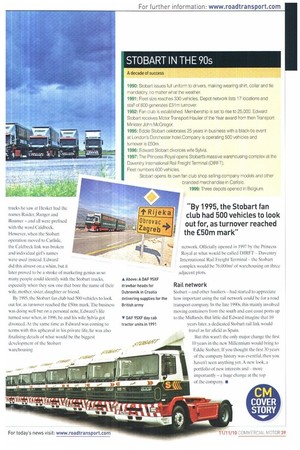 In the continuation of the history of the Stobart Group, CM reaches the 1990s. This was the decade when Eddie Stobart jumped from a fleet size of 200 to 1,000 trucks. And along the way, it gained many fans and a Royal visit to remember

qords: Bob Tuck There was no big surprise that Eddie Stobart A Above: A fleet of Volvo soon gained a huge legion of fans. In 1990, the company FL1Os and ERFs line up at issued every driver with a uniform and made it mandatory Carlisle airport in 1993 to wear a collar and tie — no matter what the weather. This made Stobart different from anyone operating in general • Below: A OAF 95 haulage at the time and, combined with the striking livery drawbar heads north to and a rapidly expanding fleet, it was no wonder the post the Mont Blanc tunnel

hag at Stobart's headquarters was full of letters from truck enthusiasts keen to gain more information about the company.

Perhaps the most surprising of these was from Jools Holland, the musician and TV presenter, when he admitted he was a keen Stobart spotter when he was out on the road. This fact even made it into the national media when Holland was interviewed by The Times.

And when Terry Wogan — then presenting a daily show on Radio 2 — joined the Stobart bandwagon, the profile of Eddie Stobart increased rapidly. Just like his father, Eddie, who always believed in seizing the moment. Edward decided to form a Stobart fan club (www.clubstobart.co.uk) and it wasn't long before 25,000 had signed up for membership.

Edward has long believed that if you are going to do something, then you should do it the best way possible — and this didn't cover just his own fleet of vehicles When Stobart first contacted the model maker Corgi to recreate a miniature vehicle, Edward encouraged the manufacturer to produce a better model truck than normal. "More detail and a better finish," was Edward's request and the subsequent enhancement of Corgi models was a direct result of this input from Stobart.

Something special With this attention to detail in mind, it's safe to say that Stobart's celebration of its 25th anniversary in 1995 at the Dorchester Hotel in London was something special. As well as a big line up of Stobart trucks along Park Lane, there was a full-size Volvo FH built inside the hotel.

That was a surprise, but more of a shock were the names on the guest list, as many of the people who had helped Stobart along the way were invited on an all-expenses-paid trip to London.

Jools Holland was there hut, at the other end of the spectrum, so were Geoff Milne and his wife. Milne was probably the first truck enthusiast to photograph the Stohart fleet when it was still at Hesket Newmarket, Cumbria. And Milne's photographic records later formed the basis of the Stobart archives.

Milne recalls the first Eddie Stobart trucks he saw at Hesket had the names Raider, Ranger and Roamer and all were prefixed with the word Caldbeck. However, when the Stobart operation moved to Carlisle, the Caldbeck link was broken and individual girl's names were used instead. Edward did this almost on a whim, but it later proved to be a stroke of marketing genius as so many people could identify with the Stobart trucks, especially when they saw one that bore the name of their wife, mother. sister, daughter or friend.

By 1995, the Stohart fan club had 500 vehicles to look out for, as turnover reached the £50m mark. The business was doing well hut on a personal note, Edward's life turned sour when, in 1996, he and his wife Sylvia got divorced. At the same time as Edward was coming to terms with this upheaval in his private life, he was also finalising details of what would be the biggest development of the Stobart warehousing

network. Officially opened in 1997 by the Princess Royal at what would be called DIRFT Daventry International Rail Freight Terminal the Stobart complex would be 76,000m2 of warehousing on three adjacent plots.

Stobart and other hauliers had started to appreciate how important using the rail network could be for a road transport company. In the late 1990s, this mainly involved moving containers from the south and east coast ports up to the Midlands. But little did Edward imagine that 10

But this wasn't the only major change the first 10 years in the new Millennium would bring to Eddie Stobart. If you thought the first 30 years of the company history was eventful, then you haven't seen anything yet. A new look, a portfolio of new interests and more importantly a huge change at the top

of the company. II