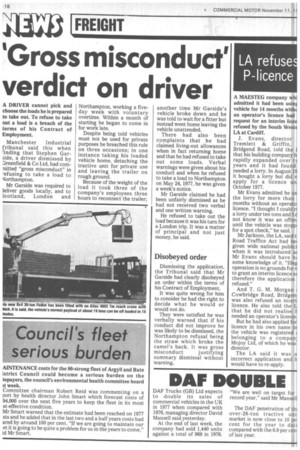 A MAESTEG company whi admitted it had been usini vehicle for 14 months with( an operator's licence had request for an interim Been refused by the South Weste LA at Cardiff.

J. Evans, director Tremlett & Griffin, Bridgend Road, told the that his building compan*h rapidly expanded over' ti years and it had found needed a lorry. In August 19 it bought a lorry but did n apply for a licence on October 1977.

Mr Evans admitted he us the lorry for more than months without an operato licence. "I thought I could ri a lorry under ten tons and id not know it was an offen until the vehicle was stoppi for a spot check," he said.

Mr Jackson, the LA, said t, Road Traffice Act had be given wide national publici when it was introduced at Mr Evans should have h4 some knowledge of it. "Meg operation is no grounds for n to grant an interim licence ai therefore the application refused."

And T. G. M. Morgan 1 Cowbridge Road, Bridgen was also refused an interi licence. He also told the L that he did not realise 1. needed an operator's licence.

But he had also applied for licence in his own name bi the vehicle was registered E belonging to a compan: Mojoy Ltd, of which he was director.

The LA said it was a incorrect application and h would have to re-apply.