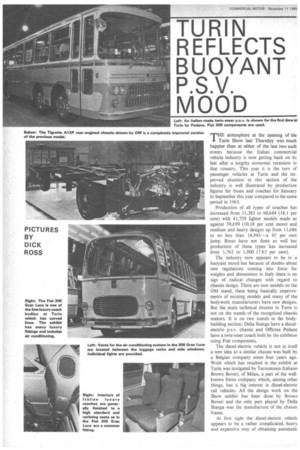 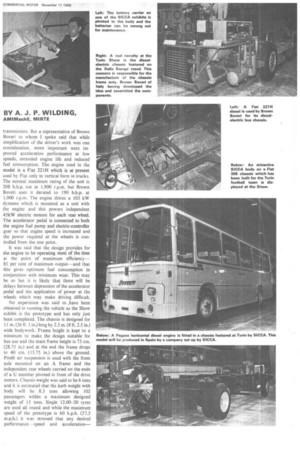 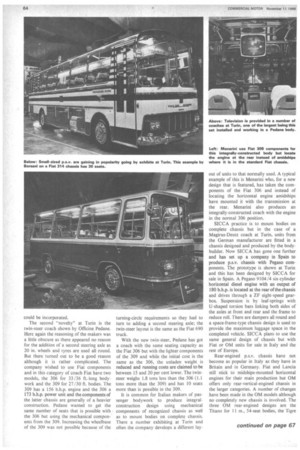 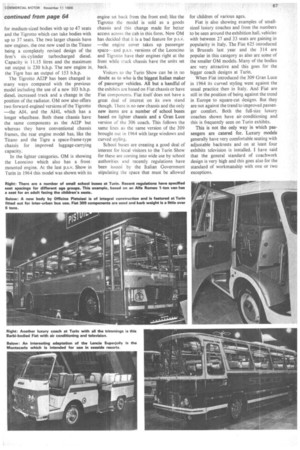 Fr'HE atmosphere at the opening of the -L Turin Show last Thursday was much happier than at either of the last two such events because the Italian commercial vehicle industry is now getting back on its feet after a lengthy .economic recession in that country. This year it is the turn of passenger vehicles at Turin and the improved situation in this section of the industry is well illustrated by production figures for buses and coaches for January to September this year compared to the same period in 1965.

The industry now appears to be in a buoyant mood but because of doubts about new regulations coming into force for weights and dimensions in Italy there is no sign of radical changes with regard to chassis design. There are new models on the OM stand, these being basically improvements of existing models and many of the bodywork manufacturers have new designs. But the main technical interest in Turin is not on the stands of the recognized chassis makers. It is on two stands in the bodybuilding section: Della Stanga have a dieselelectric p.s.v. chassis and Officine Pedane have &twin-steer coach built by the exhibitor using Fiat components.

The diesel-electric vehicle is not in itself a new idea as a similar chassis was built by a Belgian company some four years ago. Work which has resulted in the exhibit at Turin was instigated by Tecnomasio Italian() Brown Boveri, of Milan, a part of the wellknown Swiss company which, among other things, has a big interest in diesel-electric rail vehicles. All the design work on the Show exhibit has been done by Brown Boveri and the only part played by Della Stanga was the manufacture of the chassis frame.

At first sight the diesel-electric vehicle appears to be a rather complicated, heavy and expensive way of obtaining automatic

AMIMechE, MIRTE transmission. But a representative of Brown Boveri to whom I spoke said that while simplification of the driver's work was one consideration, more important were improved acceleration performance at low speeds, extended engine life and reduced fuel consumption. The engine used in the model is a Fiat 221H which is at present used by Fiat only in vertical form in trucks. The normal maximum rating of the unit is 208 b.h.p. net at 1,900 r.p.m. but Brown Boveri uses it derated to 190 b.h.p. at 1,900 r.p.m. The engine drives a 103 kW dynamo which is mounted as a unit with the engine and this powers independent 45kW electric motors for each rear wheel. The accelerator pedal is connected to both the engine fuel pump and electric-controller gear so that engine speed is increased and the power required at the wheels is controlled from the one point.

It was said that the design provides for the engine to be operating most of the time at the point of maximum efficiency 85 per cent of maximum output—and that this gives optimum fuel consumption in conjunction with minimum wear. This may be so but it is likely that there will be delays between depression of the accelerator pedal and the application of power at the wheels which may make driving difficult.

No experience was said to have been obtained in running the vehicle as the Show exhibit is the prototype and has only just been completed. The chassis is designed for 11 m.(36 ft. I in.) long by 2.5 in. (8 ft. 2.5 in.) wide bodywork. Frame height is kept to a minimum to make the design suitable for bus use and the main frame height is 73 cm. (28.75 in.) and at the end the frame drops to 40 cm. (15.75 in.) above the ground. Pirelli air suspension is used with the front axle mounted on an A frame and the independent rear wheels carried on the ends of a U member pivoted in front of the drive motors. Chassis weight was said to be 6 tons and it is estimated that the kerb weight with body will be 8.3 tons allowing 102 passengers within a maximum designed weight of 15 tons. Single 12.00-20 tyres are used all round and while the maximum speed of the prototype is 60 k.p.h. (37.5 m.p.h.) it was stressed that any desired

The second "novelty" at Turin is the twin-steer coach shown by Officine Pedane. Here again the reasoning of the makers was a little obscure as there appeared no reason for the addition of a second steering axle as 20 in. wheels and tyres are used all round. But there turned out to be a good reason although it is rather complicated. The company wished to use Fiat components and in this category of cOach Fiat have two models, the 306 for 33/36 ft.-long bodywork and the 309 for 27/30 ft. bodies. The 309 has a 156 b.h.p. engine and the 306 a 173 b.h.p. power unit and the components of the latter chassis are generally of a heavier construction. Pedane wanted to get the same number of seats that is possible with the 306 but using the mechanical components from the 309. Increasing the wheelbase of the 309 was not possible because of the turning-circle requirements so they had to turn to adding a second steering axle; the twin-steer layout is the same as the Fiat 690 truck.

With the new twin-steer, Pedane has got a coach with the same seating capacity as the Fiat 306 but with the lighter components of the 309 and while the initial cost is the same as the 306, the unladen weight is reduced and running costs are claimed to be between 15 and 20 per cent lower. The twinsteer weighs 1.8 tons less than the 306 (1.1 tons more than the 309) and has 10 seats more than is possible in the 309.

It is common for Italian makers of passenger bodywork to produce integralconstruction design using mechanical components of recognized chassis as well as to mount bodies on complete chassis. There a number exhibiting at Turin and often the company develops a different lay out of units to that normally used. A typical example of this is Menarini who, for a new design that is featured, has taken the components of the Fiat 306 and instead of locating the horizontal engine amidships have mounted it with the transmission at the rear. Menarini also produces an integrally-constructed coach with the engine in the normal 306 position.

SICCA practice is to mount bodies on complete chassis but in the case of a Magirus-Deutz coach at Turin, units from the German manufacturer are fitted in a chassis designed and produced by the bodybuilder. Now SICCA has gone one further and has set up a company in Spain to produce p.s.v. chassis with Pegaso components. The prototype is shown at Turin and this has been designed by SICCA for sale in Spain. A Pegaso 9104/4 six-cylinder horizontal diesel engine with an output of 180 b.h.p. is located at the rear of the chassis and drives through a ZF eight-speed gearbox. Suspension is by leaf-Springs with U-shaped torsion bars linking both sides-of the axles at front and rear and the frame to reduce roll. There are dampers all round and a space-frame-type chassis design is used to provide the maximum luggage space in the completed vehicle. SICCA plans to use the same general design of chassis but with Fiat or OM units for sale in Italy and the rest of Europe.

Rear-engined p.s.v. chassis have not become as popular in Italy as they have in Britain and in Germany. Fiat and Lancia still stick to midships-mounted -horizontal engines for their main production but OM offers only rear-vertical-engined chassis in the larger categories. A number of changes have been made in the OM models although no completely new chassis is involved. The three OM rear-engined designs are the Titan° for 11 m., 54-seat bodies, the Tigre

for medium-sized bodies with up to 47 seats and the Tigrotto which can take bodies with up to 37 seats. The two larger chassis have new engines, the one now used in the Titano being a completely revised design of the firm's six-cylinder turbocharged diesel. Capacity is 11.15 litres and the maximum net output is 230 b.h.p. The new engine in, the Tigre has an output of 153 b.h.p.

The Tigrotto AI2P has been changed in many ways compared with the previous model including the use of a new 103 b.h.p. diesel, increased track and a change in the position of the radiator. OM now also offers two forward-engined versions of the Tigrotto —the A14, and the AI4L which has a longer wheelbase. Both these chassis have the same components as the Al2P but whereas they have conventional chassis frames, the rear engine model has, like the Titano and the Tigre a space-frame-type chassis for improved luggage-carrying capacity.

In the lighter categories, OM is showing the Leoncino which also has a frontmounted engine. At the last p.s.v. Show in Turin in 1964 this model was shown with its engine set back from the front end; like the Tigrotto the model is sold as a goods chassis and this change made for better access across the cab in this form. Now OM has decided that it is a bad feature for p.s.v. —the engine cover takes up passenger space—and p.s.v. versions of the Leoncino and Tigrotto have their engines right at the front while truck chassis have the units set back.

Visitors to the Turin Show can be in no doubt as to who is the biggest Italian maker of passenger vehicles. All but a handful of the exhibits are based on Fiat chassis or have Fiat components. Fiat itself does not have a great deal of interest on its own stand though. There is no new chassis and the only new items are a number of school buses based on lighter chassis and a Gran Luce version of the 306 coach. This follows the same lines as the same version of the 309 brought out in 1964 with large windows and curved styling.

School buses are creating a good deal of interest for local visitors to the Turin Show for these are coming into wide use by school authorities and recently regulations have been issued by the Italian Government stipulating the space that must be allowed for children of various ages.

Fiat is also showing examples of smallsized luxury coaches and from the numbers to be seen around the exhibition hall, vehicles with between 27 and 33 seats are gaining in popularity in Italy. The Fiat 625 introduced in Brussels last year and the 314 are popular in this category as also are some of the smaller OM models. Many of the bodies are very attractive and this goes for the bigger coach designs at Turin.

When Fiat introduced the 309 Gran Luce in 1964 its curved styling went against the usual practice then in Italy. And Fiat are still in the position of being against the trend in Europe to square-cut designs. But they are not against the trend to improved passenger comfort. Both the full-size luxury coaches shown have air-conditioning and this is frequently seen on Turin exhibits.

This is not the only way in which passengers are catered for. Luxury models generally have very comfortable seating with adjustable backrests and on at least four exhibits television is installed. I have said that the general standard of coachwork design is very high and this goes also for the standard of workmanship with one or two exceptions.