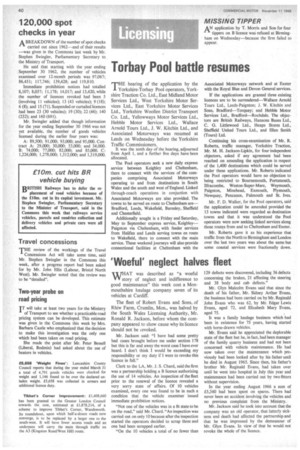 Page 42, 11th November 1966 — 'Woeful' neglect halves fleet
Close
Noticed an error?
If you've noticed an error in this article please click here to report it so we can fix it.
Keywords : Business / Finance

AT was described as "a woeful

story of neglect and indifference to good maintenance" this week cost a Monmouthshire haulage company seven of its vehicles at Cardiff.

The fleet of Robert Evans and Sons, of Rhiw Farm, Crumlin, Mon., was halved by the South Wales Licensing Authority, Mr. Ronald R. Jackson, before whom the company appeared to show cause why its licence should not be revoked.

Mr. Jackson said: "I have had some pretty bad cases brought before me under section 178 but this is far and away the worst case I have ever heard. I don't think I would be exceeding my responsibility or my duty if I were to revoke this licence in full."

Clerk to the LA, Mr. J. S. Chard, said the firm was a partnership holding a B licence authorizing the use of 14 vehicles. An inspection of the fleet prior to the renewal of the licence revealed a very sorry state of affairs. Of 10 vehicles examined, every one was found to be in such a condition that the vehicle examiner issued immediate prohibition notices.

"Not one of the vehicles was in a fit state to be on the road," said Mr. Chard. " An inspection was carried out on only 10 because after the inspection started the operators decided to scrap three and one had been scrapped earlier.

"On the 10 vehicles a total of no fewer than

119 defects were discovered, including 36 defects concerning the brakes, 21 affecting the steering and 38 body and cab defects."

Mr. Glyn Malcolm Evans said that since the death of his father, Mr. Sidney Arthur Evans, the business had been carried on by Mr. Reginald John Evans who was 62, by Mr. Edgar Lewis Evans, aged 72, and Elizabeth Mary Evans, aged 75.

It was a family haulage business which had been in existence For 75 years, having started with horse-drawn vehicles.

Mr. Evans said he appreciated the deplorable state of the fleet but he, in fact, had been manager of the family quarry business and had not been concerned with vehicle maintenance. He had DOW taken over the maintenance which previously had been looked after by his father until he died in August 1965. Since then, his father's brother Mr. Reginald Evans, had taken over until he went into hospital in July this year and maintenance had been carried out by two fitters without supervision.

In the year ending August 1966 a sum of £5,360 had been spent on spares. There had never been an accident involving the vehicles and no previous complaint from the Ministry.

Mr. Jackson said he took into account that the company was an old operator, that latterly sickness and death had affected the partnership and that he was impressed by the demeanour of Mr. Glyn Evans. In view of that he would not revoke the whole of the licence.