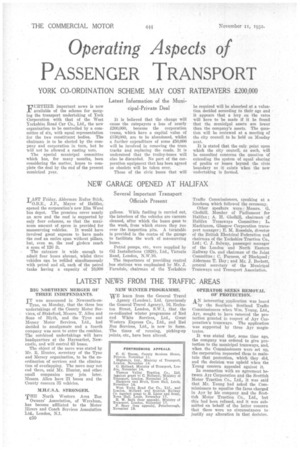 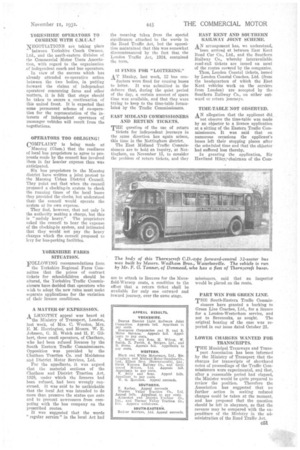 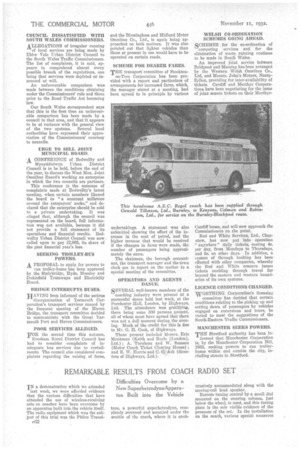 IT was announced in Newcastle-on Tyne, on Monday, that the three bus undertakings of the County Motor Services, of Stakeford, Messrs. T. Allen and Sons of BIyth, and the Tyne and Mersey Motor Services, Ltd., had decided to amalgamate and a fourth company was soon to enter the combine, The combined undertakings will have headquarters at the Haymarket, Newcastle, and will control 63 buses.

The object of the move was stated by Mr. R. Hunter, secretary of the Tyne and Mersey organization, to be the coordination of services and the elimination of overlapping. The move may not end there, said Mr. Hunter, and other Smrdl companies may join later. Messrs. Allen have 21 buses and the County concern 35 vehicles.

AN interesting application was hearil by the Southern Scotland Traffic Commissioners when Wm. Young, Ltd., Ayr, sought to have removed the protection granted in respect of Ayr Corporation's tramways. The application was supported by three Ayr magistrates.

It was stated that, some time ago, the company was ordered to give protection to the municipal tramways, and, when the Commissioners were set up, the corporation requested them to maintain that protection, which they did, and the decision was upheld when the Young concern appealed against it. In connection with an agreement between Ayr Corporation and the Scottish Motor Traction Co., Ltd., it was said that Mr. Young had asked the Commissioners to equalize the fares charged in Ayr by his company and the Scottish Motor Traction Co., Ltd., but this had been refused, and it was submitted on behalf of the latter concern that there were no circumstances to justify any alteration in that decision. YORKSHIRE OPERATORS TO • COMBINE WITH C.M.UA.?

NEGOTIATIONS are taking place between Yorkshire Coach Owners, Ltd., and the north-eastern division of the Commercial Motor TJsers Association, with regard to the organization or independent coach and bus operators.

in view of the success which has already attended co-operative action between the two bodies, in putting forward the claims of independent operator concerning fares and other matters, it is felt that steps should be taken to secure a continuation of this united front. It is expected that some permanent scheme of co-operation for the representation of the in• terests of independent operators of passenger vehicles will result from the negotiations.

COMPLAINT is being made at

DrIaesteg (Glam.) that the readiness of focal bus proprietors to agree to proposals made by the council has involved them in far heavier expense than was anticipated.

Six bus proprietors in the Maesteg, district have written a joint protest to the blaesteg Urban District Council. They point out that when the council proposed a clocking-in system to check the running times of the local buses they provided the clocks, but understood that the council would operate the system at its own expense.

They find, however, that not only is the authority making a charge, but this " unduly heavy." The proprietors asked the council to bear the expense of the clocking-in system, and intimated that they would not pay the heavy charges which the council proposed to levy for bus-parking facilities.

FOLLOWING recommendations from tha Yorkshire Regional Fares Committee that the prices of contract tickets for schoolchildren should be altered, the Yorkshire Traffic Commissioners have decided that operators who wish to adopt the new rates must make separate applications for the variation of their licence conditions.

A MATTER OF EXPRESSION.

For the appellants, it was argued that the material sections of the Chatham and District Traction Act, 1928, under which the licences had been refused, had been wrongly construed. It was said to be unthinkable that the local Act was intended to do more than preserve the status quo ante and to prevent newcomers from competing with the bus company on the prescribed routes.

It was suggested that the words regular service" in the local Act had the meaning taken from the special significance attached to the words in the Road Traffic Act, but the opposition maintained that this was somewhat discountenanced by the fact that the London Traffic Act, 1924, contained the term.

AT Hanley, last week, 12 bus conductors were riend for causing buses to loiter. It was submitted in the defence that, during the quiet period of the day, a certain amount of spare time was available, and that they were trying to keep to the time-table formulated by the Traffic Commissioners.

THE question of the use of return tickets for independent journeys in the same direction has again arisen, this time in the Nottingham district.

The East Midland Traffic Commissioners are to hold an inquiry, at Nottingham, on November 15, to consider the problem of return tickets, and they are to attach to licences for the Mansfield-Warsop route, a condition to the effect that a return ticket shall be available for only one outward and inward journey, over the same stage. EAST KENT AND SOUTHERN RAILWAY JOINT SCHEME.

AN arrangement has, we understand, been arrived at between East Kent Road Car Co., Ltd., and the Southern Railway Co., whereby interavailable road-rail tickets are issued on most of the routes covered by the companies.

Thus, London Coastal tickets, issued by London Coastal Coaches, Ltd. (from the headquarters of which the East Kent vehicles work on the services from London) are accepted by the Southern Railway Co., on either outward or return journeys.

AN allegation that the applicant did.

not observe the time-table was made by an objector to a licence application at a sitting of the Eastern Traffic Commissioners. It was said that on numerous occasions the applicant's buses left their stopping places after the scheduled time and that the objector had suffered loss thereby.

In granting the application, Sir Haviland Hile3yehairman of the Corn missioners, said that an inspector would be placed on the route.

PART WIN FOR GREEN LINE. THE South-Eastern Traffic Commis sioners have granted a backing to Green Line Coaches, Ltd., for a licence for a London-Westerhatn service, and

ROt to Sevenoaks, as sought. The original hearing of the ease was reported in our issue dated October 21.

THE Municipal Tramways and Trans

port Association has been informed by the Ministry of Transport that the charges for transcripts of shorthand notes of proceedings of the Traffic Commissioners were experimental, and that, after a reasonable period had elapsed, the Minister would be quite prepared to review the position. Therefore the Association has suggested that no further action in seeking reduced charges could be taken at the moment, and has proposed that the question should be left in abeyance, so that the revenue may be compared with the expenditure of the Ministry in the administration of the Road Traffic Act.

ALLEGATIONS of irregular running of local services are being made by Ebbw Vale Urban District Council to the South Wales Traffic Commissioners. The list of complaints, it is said, appears to comprehend almost every possible breach of the regulations, one being that services were depleted or increased at will.

An unfavourable comparison was made between the conditions obtaining under the Commissioners' rule and those prior to the Road Traffic Act becoming, law.

Our South Wales correspondent says that this is the first time an unfavourable comparison has been made by a council in that area, and that it appears to be at variance with the general view of the two systems. Several local authorities have expressed their appreciation of the Commissioners' courtesy to councils.

URGE TO SELL JOINT MUNICIPAL BOARD.

CONFERENCE of Bedwellty and Mynyddislwyn Urban District Council is to be held, before the end of the year, to discuss the West Mon. Joint Omnibus Board's working an enterprise in which the two councils are partners.

This conference is the outcome of complaints made at Bedwellty's latest meeting, when certain members likened the board to "a constant millstone around the ratepayers' necks," and declared that the enterprise should be sold to a private undertaking. It was alleged that, although the council was represented on the board, full information was not available, because it did not provide a full statement of its operations and financial results. Bedwellty Urban District Council was now. called upon to pay 12,963, its share of the past financial year's loss.

A PROPOSAL to apply for powers to

run trolley-buses has been approved by the Stalybridge, Hyde, Mossley and Dukinfield Tramways and Electricity Board.

HAVING been informed of the serious disorganization of Yarmouth Corporation's transport services caused by the frequent opening of the Haven Bridge, the transport committee decided to communicate with the Great Yarmouth Port and Haven Commissioners,

POOR SERVICES ALLEGED. FOR the second time this autumn,

Evesham Rural District Council has had to consider complaints of inadequate bus services due to curtailments. The council also considered complaints regarding the raising of fares, and the Birmingham and Midland Motor' Omnibus Co., Ltd., is again being approached on both matters. It was also pointed out that lighter vehicles than those at present in use would have to be operated on certain roads.

THE transport committee of Stockton on-Tees Corporation has been provided with a report and particulars of arrangements for increased fares, which, the manager stated at a meeting, had been agreed to in principle by various

undertakings. A statement was also submitted showing the effect of the increase in the cost of petrol, and the higher revenue that would be received if the changes in fares were made, the number of passengers being approximately the same.

The chairman, the borough accountant, the transport manager and the town clerk are to report on the matter to a special meeting of the committee.

SEVERAL well-known members of the coaching industry were present at a successful dance held last week, at the Porchester Hall, London, by Highways, Ltd. The attendance was gratifying, there being some 300 persons present, all of whom must have agreed that there was not a dull moment during the evening. Much of the credit for this is due to Mr. G. H. Cook, of Highways.

SCHEMES for the co-ordination of competing services and for the elimination of waste running continue to be made in South Wales.

An improved joint service between Bridgend and Maesteg has been arranged by the Western Welsh Omnibus Co., Ltd, and Messrs. John's Motors, Nantyffyllon, providing for inter-availability of tickets. Cardiff and Merthyr Corporations have been negotiating for the issue of joint season tickets on their Merthyr Cardiff buses, and will now approach the Commissioners on the point.

Red and White Services, Ltd., Chepstow, has now put into operation "anywhere" daily tickets, costing 4s. per day, from Mondays to Thursdays, and 5s. on other days. In addition, a system of through booking has been effected with other companies, whereby the Red and White concern issues tickets enabling through travel far beyond the eastern and western boundaries of its own systems.

committee has decided that certain conditions relating to the picking up and setting down of passengers by vehicles engaged on excursions and tours, be varied to meet the suggestions of the South-Eastern Traffic Commissioners.

THE Stretford authority has been in