Hours offender gets a week's suspension 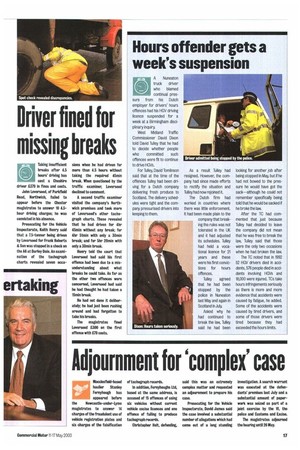 Page 19, 11th May 2000 — Hours offender gets a week's suspension
Close
Noticed an error?
If you've noticed an error in this article please click here to report it so we can fix it.
Keywords : Road Transport, Truck Driver, Traffic Collision

truck driver who blamed continual pressure from his Dutch employer for drivers hours offences had his HGV driving licence suspended for •a week at a Birmingham disdplinary inquiry.

West Midland Traffic Commissioner David Dixon told David Tulley that he had to decide whether people who committed such offences were fit to continue to drive HGVs.

For Tulley, David Tomlinson said that at the time a the offences Tulley had been driving for a Dutch company delivering fresh produce to Scotland. The delivery schedules were tight and the company pressurised drivers into keeping to them.

As a result Tulley had resigned. However, the company had since made efforts to rectify the situation and Tulley had now rejoined it.

The Dutch firm had worked in countries where there was little enforcement. It had been made plain to the company that breaking the rules was not tolerated in the UK and it had adjusted its schedules. Tulley had held a vocational licence for 21 years and these were his first convictions for hours offences.

Tulley agreed that he had been stopped by the police in Nuneaton last May and again in Scotland in July.

Asked why he had continued to break the law, Tulley said he had been looking for another job after being stopped in May, but if he had not bowed to the pressure he would have got the sack—although he could not remember specifically being told that he would be sacked if he broke the law.

After the IC had commented that just because Tulley had decided to leave the company did not mean that he was free to break the law, Tulley said that those were the only two occasions when he had broken the law.