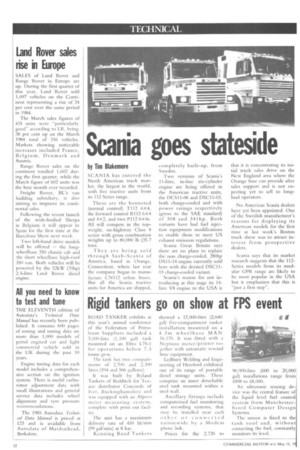 Page 14, 11th May 1985 — nia goes stateside
Close
Noticed an error?
If you've noticed an error in this article please click here to report it so we can fix it.
Keywords : Södertälje Municipality, Scania, Volkswagen, Scania Ab, Truck

SCANIA has entered the North American truck market, the largest in the world, with five tractive units from its 112 Series range.

They are being sold -through Saab-Scania of America, based in Orange, Connecticut, where last year the company began to manufacture CN112 urban buses. But all the Scania tractive units for America are shipped,

Two versions of Scania's 11-litre, in-line six-cylinder engine arc being offered in the American tractive units, the DCS11-06 and DSC11-03, both charge-cooled and with power ratings respectively (gross to the SAE standard) of 308 and 341hp. Both variants have had fuel injection equipment modifications to enable them to meet US exhaust emission regulations.

Scania's reason for not introducing at this stage its 14litre V8 engine to the USA is that it is concentrating its initial truck sales drive on the New England area where the Orange base can provide after sales support and is not expecting yet to sell to longhaul operators.

No American Scania dealers have yet been appointed. One of the Swedish manufacturer's reasons for displaying its American models for the first time at last week's Boston truck show was to attract interest from prospective dealers.

Scania says that its market research suggests that the 112Series models from its modular GPR range are likely to be most popular in the USA but it emphasises that this is "just a first step".