CF send their biggest and 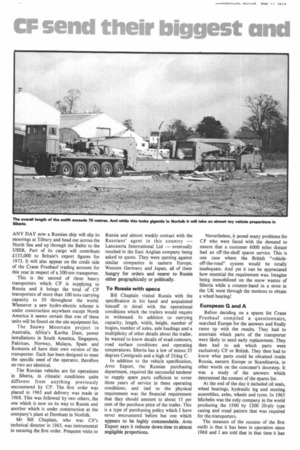 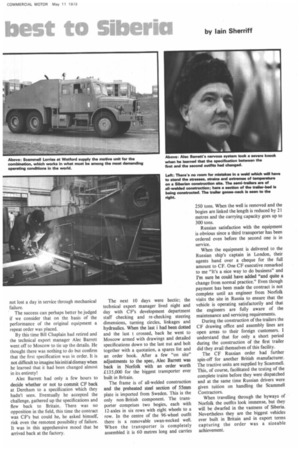 Page 72, 11th May 1973 — CF send their biggest and
Close
Noticed an error?
If you've noticed an error in this article please click here to report it so we can fix it.
Keywords : Norfolk, Scammell, Transporter, Dereham, Counties Of England, Road Transport

ANY DAY now a Russian ship will slip its moorings at Tilbury and head out across the North Sea and up through the Baltic to the USSR. Part of its cargo will contribute £135,000 to Britain's export figures for 1973. It will also appear on the credit side of the Crane Fruehauf trading account for this year in respect of a 300-ton transporter.

This is the second of three heavy transporters which CF is supplying to Russia and it brings the total of CF transporters of more than 100 tons carrying capacity to 50 throughout the world. Whenever a new hydro-electric scheme is under construction anywhere except North America it seems certain that one of these units will be found on the site equipment list.

The Snowy Mountain project in Australia, Africa's Kariba Dam, power installations in South America, Singapore, Pakistan, Norway, Malaya, Spain and Romania all have their own version of the transporter. Each has been designed to meet the specific need of the operator, therefore no two are identical.

The Russian vehicles are for operations in Siberia, in climatic conditions quite different from anything previously encountered by CF. The first order was placed in 1965 and delivery was made in 1968. This was followed by two others, the one which is now on its way to Russia and another which is under construction at the company's plant at Dereham in Norfolk.

Mr Bill Chaplain, who was CF's technical director in 1965, was instrumental in securing the first order. Frequent visits to Russia and almost weekly contact with the Russians' agent in this country — Lancastria International Ltd — eventually resulted in the East Anglian company being asked to quote. They were quoting against similar companies in eastern Europe, Western Germany and Japan, all of them hungry for orders and nearer to Russia either geographically or politically.

To Russia with specs

Bill Chaplain visited Russia with the specification in his hand and acquainted himself in detail with the operational conditions which the trailers would require to withstand. In addition to carrying capacity, length, width, height, number of bogies, number of axles, axle loadings and a multiplicity of other details about the trailer, he wanted to know details of road contours, road surface conditions and operating temperatures. Siberia has a low of minus 35 degrees Centigrade and a high of 25deg C.

In addition to the vehicle specification, Avto Export, the Russian purchasing department, required the successful tenderer to supply spare parts sufficient to cover three years of service in these operating conditions; and tied to the physical requirement was the financial requirement that they should amount to about 15 per cent of the purchase price of the trailer. This is a type of purchasing policy which I have never encountered before but one which appears to be highly commendable. Avto Export says it reduces down-time to almost negligible proportions. Nevertheless, it posed many problems for CF who were faced with the demand to ensure that a customer 6000 miles distant had an off-the-shelf spares service. This is one case where the British "vehicleoff-the-road" system would be totally inadequate. And yet it can be appreciated how essential the requirement was. Imagine being immobilized on the snow wastes of Siberia while a counter-hand in a store in the UK went through the motions to obtain a wheel beating!

Before deciding on a spares list Crane Fruehauf compiled a questionnaire, searched Europe for the answers and finally came up with the results. They had to ascertain which parts of the transporter were likely to need early replacement. They then had to ask which parts were exclusively CF or British. They then had to know what parts could be obtained inside Russia, eastern Europe or Scandinavia, in other words on the customer's doorstep. It was a study of the answers which determined the content of the spares list.

At the end of the day it included oil seals, wheel bearings, hydraulic leg and steering assemblies, axles, wheels and tyres. In 1965 Michelin was the only company in the world producing the 1500 by 1200 20-ply type casing and tread pattern that was required for the transporters.

The measure of the success of the first outfit is that it has been in operation since 1968 and I am told that in that time it has not lost a day in service through mechanical failure.

The success can perhaps better be judged if we consider that on the basis of the performance of the original equipment a repeat order was placed.

By this time Bill Chaplain had retired and the technical export manager Alec Barrett went off to Moscow to tie up the details. He thought there was nothing to do but confirm that the first specification was in order. It is not difficult to imagine his initial dismay when he learned that it had been changed almost in its entirety!

Alec Barrett had only a few hours to decide whether or not to commit CF back at Dereham to a specification which they hadn't seen. Eventually he accepted the challenge, gathered up the specifications and flew back to Britain. There was no opposition in the field, this time the contract was CF's but could he, he asked himself, risk even the remotest possibility of failure. It was in this apprehensive mood that he arrived back at the factory. The next 10 days were hectic; the technical export manager lived night and day with CF's development department staff checking and re-checking steering dimensions, turning circles, linkages and hydraulics. When the last i had been dotted and the last t crossed, back he went to Moscow armed with drawings and detailed specifications down to the last nut and bolt together with a quotation, a spares list and an order book. After a few "on site" adjustments to the spec, Alec Barrett was back in Norfolk with an order worth £135,000 for the biggest transporter ever built in Britain.

The frame is of all-welded construction and the preheated steel section of 55mm plate is imported from Sweden. This is the only non-British component. The transporter comprises two bogies, each with 12-axles in six rows with eight wheels to a row. In the centre of the 96-wheel outfit there is a removable swan-necked well. When the transporter is completely assembled it is 60 metres long and carries 250 tons. When the well is removed and the bogies are linked the length is reduced by 21 metres and the carrying capacity goes up to 300 tons.

Russian satisfaction with the equipment is obvious since a third transporter has been ordered even before the second one is in service.

When the equipment is delivered to the Russian ship's captain in London, their agents hand over a cheque for the full amount to CF. One CF executive remarked to me "It's a nice way to do business" and I'm sure he could have added "and quite a change from normal practice." Even though payment has been made the contract is not complete until an engineer from Norfolk visits the site in Russia to ensure that the vehicle is operating satisfactorily and that the engineers are fully aware of the maintenance and servicing requirements.

The CF Russian order had further spin-off for another British manufacturer. The tractive units are supplied by Scammell. This, of course, facilitated the testing of the complete trains before they were dispatched and at the same time Russian drivers were given tuition on handling the Scammell Contractors.

When travelling through the byways of Norfolk the outfits look immense, but they will be dwarfed in the vastness of Siberia. Nevertheless they are the biggest vehicles ever built in Britain and in export terms capturing the order was a sizeable achievement.