Texaco first to use Maxaret for non-driven axles 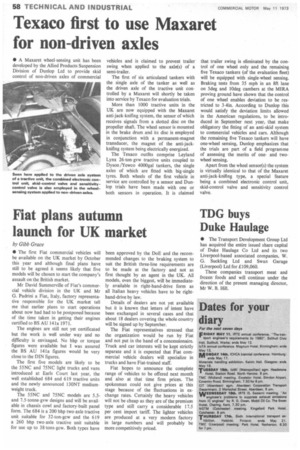 Page 60, 11th May 1973 — Texaco first to use Maxaret for non-driven axles
Close
Noticed an error?
If you've noticed an error in this article please click here to report it so we can fix it.

• A Maxaret wheel-sensing unit has been developed by the Allied Products Suspension Division of Dunlop Ltd to provide skid control of non-driven axles of commercial vehicles and is claimed to prevent trailer swing when applied to the axle(s) of a semi-trailer.

The first of six articulated tankers with the single axle of the tanker as well as the driven axle of the tractive unit controlled by a Maxaret will shortly be taken into service by Texaco for evaluation trials.

More than 1000 tractive units in the UK are now equipped with the Maxaret anti-jack-knifing system, the sensor of which receives signals from a slotted disc on the propeller shaft. The wheel sensor is mounted in the brake drum and its disc is employed in conjunction with a permanent-magnet transducer, the magnet of the anti-jackknifing system being electrically energized.

The Texaco outfits comprise Leyland Lynx 26-ton-gvw tractive units coupled to Dyson /Yewco 4000gal tankers, the single axles of which are fitted with big-single tyres. Both wheels of the first vehicle in service are controlled by a sensor and Dunlop trials have been made with one or both sensors in operation. It is claimed

that trailer swing is eliminated by the control of one wheel only and the remaining five Texaco tankers (of the evaluation fleet) will be equipped with single-wheel sensing. Braking tests from 35 mph in an 8ft lane on 5deg and 10deg cambers at the MIRA proving ground have shown that the control of one wheel enables deviation to be restricted to 3-4in. According to Dunlop this would satisfy the deviation limits allowed in the American regulations, to be introduced in September next year, that make obligatory the fitting of an anti-skid system to commercial vehicles and cars. Although the remaining five Texaco tankers will have one-wheel sensing, Dunlop emphasizes that the trials are part of a field programme of assessing the merits of oneand twowheel sensing.

Apart from the wheel sensor(s) the system is virtually identical to that of the Maxaret anti-jack-knifing type, a special feature being a combined electronic control unit, skid-control valve and sensitivity control valve.