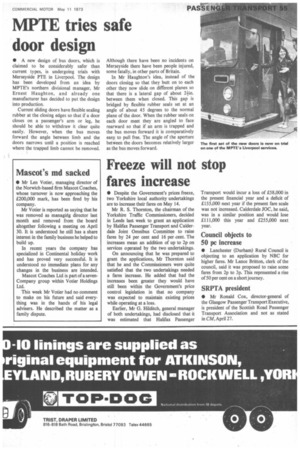 Page 57, 11th May 1973 — MPTE tries safe door design
Close
Noticed an error?
If you've noticed an error in this article please click here to report it so we can fix it.
Keywords : Door, Sliding Door, Bus

• A new design of bus doors, which is claimed to be considerably safer than Current types, is undergoing trials with Merseyside PTE in Liverpool. The design has been developed from an idea by MPTE's northern divisional manager, Mr Ernest Haughton, and already one manufacturer has decided to put the design into production.

Current sliding doors have flexible sealing rubber at the closing edges so that if a door closes on a passenger's arm or leg, he should be able to withdraw it clear quite easily. However, when the bus moves forward the angle between limb and the doors narrows until a position is reached where the trapped limb cannot be removed. Although there have been no incidents on Merseyside there have been people injured, some fatally, in other parts of Britain.

In Mr Haughton's idea, instead of the doors closing so that they butt on to each other they now slide on different planes so that there is a lateral gap of about 2+in. between them when closed. This gap is bridged by flexible rubber seals set at an angle of about 45 degrees to the normal plane of the door. When the rubber seals on each door meet they are angled to face rearward so that if an arm is trapped and the bus moves forward it is comparatively easy to pull free. The angle of the aperture between the doors becomes relatively larger as the bus moves forward.