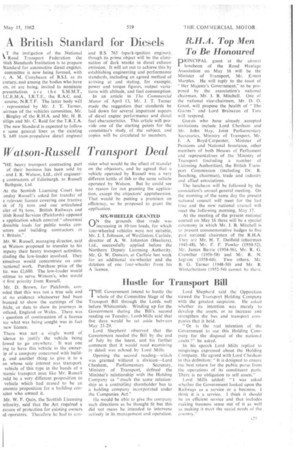 Page 23, 11th May 1962 — Hustle for Transport Bill
Close
Noticed an error?
If you've noticed an error in this article please click here to report it so we can fix it.
Keywords : Chesham, Business / Finance, Politics

THE Government intend to hustle the whole of the Committee Stage of the Transport Bill through the Lords well before .Whitsuntide. Winding up for the Government during the Bill's second reading on Tuesday. Lord•Mills said that five days would be set aside between May 21-29..

Lord Shepherd observed that the Government needed the Bill by the end of July by the latest, and his further comment that it would need examining in detail was echoed by Lord Mills.

Opening the second reading—which was granted without a division—Lord Chesham, Parliamentary Secretary, Ministry of Transport, defined the Minister's relationship with the Holding Company as "much the same relationship as a controlling 'shareholder has to a holding company incorporated under the Companies Act."

Ile would be able to give the company such directions as he thought fit but this did net mean he intended to intervene actively in its management and operation.

with the greatest .suspicion. He asked whether its intention was merely to develop the assets,. or to increase and strengthen the bus and transport companies that it held.

" Or is the real intention of the•Government to use this Holding Com pany for the disposal of the national assets 7" he. asked.

In his speech Lord Mills. replied to misgivings expressed about the Holding Company. He agreed with Lord Chesham in this definition; "It is designed to ensure the best return for the public purse from the operations of its constituent parts. There is no obligation to sell assets."

Lord . Mills added: "I was asked whether the Government looked upon the Railways as a service or a business. I

think it is a service. I • think it should be an efficient service and that includes making business sense out of it as well as making it meet the social needs of the country."