THE LATEST NEWS OF IMPORTANT EVENTS 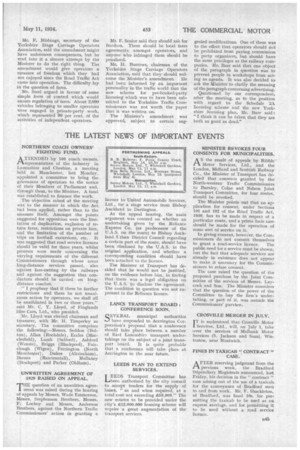 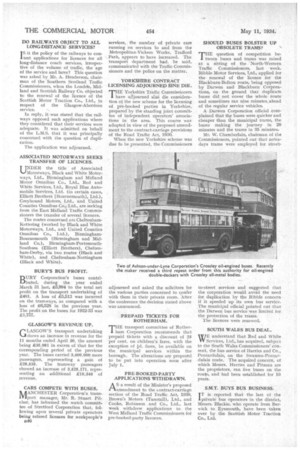 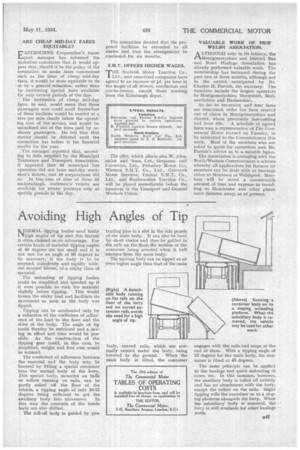 ATTENDED -by 100 coach owners, representative of the industry in Lancashire and Cheshire, a meeting held in Manchester, last Monday, appointed a committee to bring the grievances of operators to the notice of their Members of Parliament and, through them, to the Minister. A fund was established to finance the work.

The objection raised at the meeting was to the manner in which the Act had been applied, rather than to the measure itself. Amongst the points suggested for opposition were the limitation of duplication, exclusion of return fares, restrictions on private hire, and the limitation of the number of trips on football excursions, etc. It was suggested that road service licences should be valid for three years, whilst protests were made concerning the varying requirements of the different Commissioners through whose areas long-distance services passed, also against fare-cutting by the railways and against the suggestion that conductors should be carried • on longdistance coaches.

" I prophesy that if there be further restrictions and there be not unani mous action by operators, we shall all be annihilated in two or three years," said Mr. C. Y. Lloyd, of Finglands Hire Cars, Ltd., who presided.

UNWRITTEN AGREEMENT OF 1929 RAISED ON APPEAL.

THE question of an unwritten agree ' ment was raised during the hearing of appeals by Messrs. Wade Emmerson. Messrs. Stephenson Brothers, Messrs. F. Lockey and Messrs. Anderson Brothers, against the Northern Traffic Commissioners' action in granting a licence to United Automobile Services, Ltd., for a stage service from Bishop Auckland to Darlington.

At the appeal hearing, the main argument was centred on whether an undertaking given by the Reliance Express Co. (as predecessor of the U.A.S. on the route) to Bishop Auckland Urban District Council regarding a certain part of the route, should have been disclosed by the U.A.S. in the original application, and whether a corresponding condition should have been attached to the licence.

The Minister of. Transport has decided that he would not be justified, on the evidence before him, in finding that there was a legal obligation on the U.A.S. to disclose the agreement. The condition in question was not expressed in the Reliance licence.

LEEDS Transport Committee has been authorized by the city council to accept tenders for the supply of buses, "as and when required, at a total cost not exceeding R50,000." The new estates to be provided under the city's £12,000,000 housing scheme will require a great augmentation of the transport services.

AS the result of appeals by Ribble ' Motor Services, Ltd., and the London, Midland and Scottish Railway Co., the Minister of Transport has decided that consents granted by the North-westerly Traffic Commissioners to Burnley, Colne and Nelson Joint Transport Committee, for four routes, should be revoked.

The Minister points out that an application for consent, under Sections 101 and 102 of the Road Traffic Act, 1030, has to be made in respect of a particular route, and a prima facie case should be made for the operation of some sort of service on it.

In giving consent, howeler, the Commissioners do not commit themselves to grant a road-service licence. The public need for a service must he shown, but the fact that adequate services are already in existence does not appear to make it necessary for the Commissioners to refuse consent.

mittee of the services of Messrs. Lay

cock and Son. The Minister considers that the question of the power of the Committee to buy the firm's undertaking, or part of it, was outside the Commissioners' purview.

I T is understood that Crosville Motor Services, Ltd., will, on July 1, take over the services of Malbank Motor Services (S. Jackson and Sons), Wistaston, near Nantwich.

A FTER reserving judgment from the L'A previous week, the Bradford Stipendiary Magistrate announced, last Friday, his decision in the " contract " case arising out of the use of a taxicab. for the conveyance of Bradford men to and front work. Mr. F. Shackleton, of Bradford, was fined 10s. for permitting the taxicab to be used as an express garriage, and for permitting it to be used without a road service licence.

DO .RAILWAYS OBJECT TO ALL LONG-DISTANCE SERVICES?

IS it the policy of the railways to contest applications for licences for all long-distance coach services, irrespective of the volume of traffic, the age of the service and fares? This question was asked by Mr. A. Henderson, chairman of the Southern Scotland Traffic Commissioners, when the Londe-in, Midland and Scottish Railway Co. objected to the renewal of the licence of the Scottish Motor Traction Co., Ltd., in respect of the Glasgow-Aberdeen

In reply, it was stated that the railways opposed such applications where they considered that their services were adequate. It was admitted on behalf of the L.M.S. that it was principally concerned with the question of duplication.

The application was adjourned.

GLASGOW'S transport undertaking shows an increase in revenue for the 11 months ended April 30, the amount being £35,981 in excess of that for the corresponding ,period of the previous year, The buses carried 3,600,000 more passengers, representing a gain of £28,835. The tramway passengers showed an increase of 3,525,171, representing an additional £10,346 of revenue.

a46 services, the number of private cars running on services to and from the Metropolitan-Vickers Works, Trafford Park, appears to have increased. The transport department had. he said, communicated with the Traffic Commissioners and the police on the matter.

THE Yorkshire Traffic Commissioners have adjourned sine die consideration of the new scheme for the licensing of pre-booked parties in Yorkshire, prepared by the standing joint committee of independent operators' associations in the area. This course was adopted in view of the proposed amendment to the contract-carriage provisions of the Road Traffic Act, 1930.

When the new Yorkshire scheme was due to be presented, the Commissioners ommissioners

adjourned and asked the solicitors for the various parties concerned to confer with them in their private room. 'After the conference the decision stated above was announced.

THE transport committee of Rother

ham Corporation recommends that prepaid tickets with a discount of 25 per cent, on children's fares, with the exception of id. fares, be available on the municipal services within the borough. The alterations are proposed to be put into operation soon after July 1.

AS a result of the Minister's proposed amendment to the contract-carriage section of the Road Traffic Act, 1930, Brown's Motors (Tunstall), Ltd., and Cooke, Robinson and Co., Ltd., last week withdrew applications to the West Midland Traffic Commissioners for pre-booked-party licences. SHOULD

SHOULD BUSES BOLSTER UP OBSOLETE TRAMS?

T"question of competition between buses and trams was raised at a sitting of the 'North-Western Traffic Commissioners, last week. Ribble Motor Services, Ltd., applied for the renewal of the licence for the Blackburn-Bolton route, being opposed by Darwen and Blackburn Corporations, on the ground that duplicate buses did not cover the whole route and sometimes ran nine minutes, ahead of the regular service vehicles.

A Darwen Corporation official complained that dip buses were quicker and cheaper than the municipal trams, the buses making the journey in 20 minutes and the trams in 35 minutes.

Mr. W. Chamberlain, chairman of the Commissioners, pointed out that noWadays trams were employed for street

to-street services and suggested that the corporation would avoid the need for duplication by the Ribble concern if it speeded up its own bus service. The municipal official pointed out that the Darwen bus service was limited for the protection of the trams.

The licences were renewed.

WE understand that Red and White Services, Ltd., has acquired, subject to the South Wales Commissioners' consent, the bus service of Harries and Co., Pontardulais, on the Swansea-Pontardulais route. The acquired concern, of which Messrs. Harries and Pitman are the proprietors, ran five buses on the route, and had been established for 10 years.

I T is reported that the last of the private bus operators in the district, Messrs. Blackie, who operate from Berwick to Eyemouth, have been taken over by the Scottish Motor Traction Co., Ltd. ARE CHEAP MID-DAY FARES EQUITABLE?

ASTBOURNE Corporation's trans port. manager has informed the motorbus committee that it would appear that, should it be the policy of the committee to make fares concessions such as the issue of cheap mid-day fares, it would be more equitable to do so by a general reduction, rather than by instituting special fares available for only certain periods of the day.

The institution of cheap mid-day fares, he said, would mean that those passengers wno could avail themselves of these facilities would be carried at a rate per mile clearly below the operating cost of the service, and would he subsidized out of the fares paid by ordinary passengers. He felt that that matter should be deferred until the committee has before it the financial results for the year.

The manager reported that, according to data supplied by the Municipal Tramways and Transport Association, it appeared that 45 municipal bus operators did not issue mid-day workmen's tickets, and 10 corporations did so. , In thel case of nine of these 55 undertakings, workmen's tickets are available ior return journeys only at specific periods in the day.

The committee decided that the proposed facilities be extended to all routes and that the arrangement be continued for six months.

THE Scottish Motor Traction Co., Ltd., and associated companies have agreed to an increase of Id. per hour in the wages of all drivers, conductors and conductresses, except those working from the Edinburgh depot.

ALTHOUGH only in its infancy, the Montgomeryshire and District Bus and, Road Haulage Association has already performed valuable work. The membership has increased during the past two or three months, although not to the extent anticipated by Mr. Charles H. Parrish, the secretary. The members include the largest operators in Montgomeryshire,Shropshire, Merionethshire and Radnorshire.

So far as excursion and tour fares are concerned, order has been created out of chaos in Montgomeryshire and district, where previously fare-cutting had been rife. A schedule of agreed fares was, a representative of The Commercial Motor learned on Tuesday, to he submitted to the Commissioners this week. Most of the members who are asked to quote for excursions seek Mr. Parrish's advice as to a suitable figure.

The Association is arranging with the North-Western Commissioners a scheme whereby all applications for licences by members can be dealt with at bearings either at Newtown or Welshpool. Members will be saved a considerable amount of time and expense in travelling to Manchester and other places some distance away, as at present.