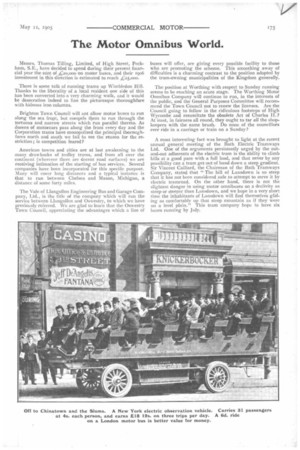 Page 3, 11th May 1905 — The Motor Omnibus World.
Close
Noticed an error?
If you've noticed an error in this article please click here to report it so we can fix it.
Keywords : Light Rail, Tram, Trams In Melbourne, Trams In London, Transport In Bristol

Messrs. Thomas Tilling, Limited, of High Street, Peckham, S.E., have decided to spend during their present financial year the slim of Zzo,000 on motor buses, and their 1906 investment in this direction is estimated to reach Z25,000.

There is some talk of running trams up Wimbledon Hill. Thanks to the liberality of a local resident one side of this has been converted into a very charming walk, and it would be desecration indeed to line the picturesque thoroughfare with hideous iron columns.

Brighton Town Council will not allow motor buses to run along the sea front, but compels them to run through the tortuous and narrow streets which run parallel thereto. As dozens of motorcars pass along the front every day and the Corporation trams have monopolised the principal thoroughfares north and south we fail .to see the reason for the restriction; is competition feared?

American towns and cities are at last awakening to the many drawbacks of trolley trams, and from all over the continent (wherever there are decent road surfaces) we are receiving intimation of the starting of bus services. Several companies have been incorporated for this specific purpose. Many will cover long distances and a typical instance is that to run between Chelsea and Mason, Michigan, a distance of some forty miles.

The Vale of Llangollen Engineering Bus and Garage Company, Ltd., is the title of the company which will run the service between Llangollen and Oswestry, to which we have previously referred. We are glad to learn that the Oswestry Town Council, appreciating the advantages which a line of

buses will offer, are giving every possible facility to those who are promoting the scheme. This smoothing away of difficulties is a charming contrast to the position adopted by the tram-owning municipalities of the Kingdom generally.

The position at Worthing with respect to Sunday running seems to be reaching an acute stage. The Worthing Motor Omnibus Company will continue to run, in the interests of the public, and the General Purposes Committee will recommend the Town Council not to renew the licenses. Are the Council going to follow in the ridiculous footsteps of High Wycombe and resuscitate the obsolete Act of Charles II.? At least, in fairness all round, they ought to tar all the shopkeepers with the same brush. Do none of the councillors ever ride in a carriage or train on a Sunday?

A most interesting fact was brought to light at the recent annual general meeting of the Bath Electric Tramways Ltd. One of the arguments persistently urged by the outand-out adherents of the electric tram is the ability to climb hills at a good pace with a full load, and that never by any possibility can a tram get out of hand down a steep gradient. Sir Vincent Gaillard, the Chairman of the Bath Tramways Company, stated that "The hill of Lansdown is so steep that it has not been considered safe to attempt to serve it by electric tramroad. On the other hand, there is not the slightest danger in using motor omnibuses on a declivity as steep or steeper than Lansdown, and we hope in a very short time the inhabitants of Lansdown will find themselves gliding as comfortably up that steep mountain as if they were on a level plain." This tram company hope to have six buses running by July.