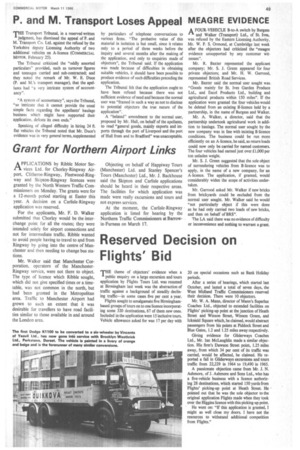 Tribunal, in a reserved written judgment, has dismissed the appeal of P. and M. Transport Co. Ltd.. against the refusal by the Yorkshire deputy Licensing Authority of two additional vehicles on A-licence (COMMERCIAL MOTOR, February 25).

The Tribunal criticized the "oddly assorted particulars" provided, such as turnover figures and tonnages carried and sub-contracted; and they noted the remark of Mr. W. E. Duce (P. and M.'s transport manager), that the apeltants had "a very intricate system of accountancy".

"A system of accountancy", says the Tribunal, "so intricate that it cannot provide the usual simple facts regarding the appellants' haulage business which might have supported their application, defeats its own ends."

Speaking of alleged difficulty in hiring 24 ft. flat vehicles the Tribunal noted that Mr. Duce's evidence was in very general terms, supplemented by particulars of telephone conversations to various firms. "The probative value of this material in isolation is but small, since it relates only to a period of three weeks before the inquiry and several months after the making of the application, and only to enquiries made of objectors", the Tribunal said. If the application was made because of difficulties in obtaining suitable vehicles, it should have been possible to produce evidence of such difficulties preceding the application.

The Tribunal felt that the application ought to have been refused because there was not sufficient evidence of need and because the normal user was "framed in such a way as not to disclose to potential objectors the true nature of the application".

A "belated" amendment to the normal user, proposed by Mr. Hall, on behalf of the apellants, to read "general goods, mainly exports and imports through the port of Liverpool and the port of Hull from and to Bradford" was unacceptable. A FOUR-VEHICLE B-to-A switch by Burgess

and Walker (Transport) Ltd., of St. Ives, was refused by the Eastern Licensing Authority, Mr. W. P. S. Ormond, at Cambridge last week after the objectors had criticized the "meagre evidence unsupported by any customer witnesses".

Mr. Baxter said the normal user sought was "Goods mainly for St. Ives Garden Produce Ltd., and Escol Products Ltd., building and agricultural products within 150 miles". If the application were granted the four vehicles would be deleted from an existing B-licence held by a partnership, in the name of Burgess and Walker.

Mr. A. Walker, a director, said that the partnership undertook agricultural work in addition to haulage. The normal user sought by the new company was in line with existing B-licence conditions. The business could be run more efficiently on an A-licence, he said, as return loads could now only be carried for named customers. The four vehicles had earned just over £1,000 per ton unladen weight.

Mr. S. J. Green suggested that the sole object of surrendering vehicles from a-licence was to apply, in the name of a new company, for an A-licence. The application, if granted, would considerably widen the scope of activities undertaken.

Mr. Garrood asked Mr. Walker if new bricks from brickyards could be excluded from the normal user sought. Mr. Walker said he would "not particularly object if this were done as he had only carried two loads of new bricks, and then on behalf of BRS".

The LA said there was no evidence of difficulty or inconvenience and nothing to warrant a grant.