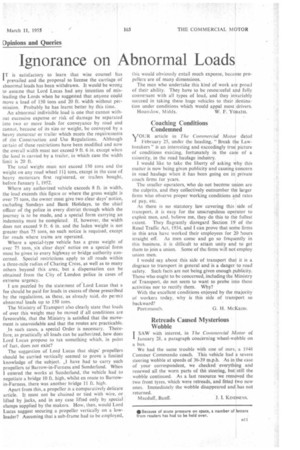 IT is satisfactory to learn that wise counsel has L prevailed and the proposal to license the carriage of abnormal loads has been withdrawn. It would be wrong to assume that Lord Lucas had any intention of misleading the Lords when he suggested that anyone could nsove a load of 150 tons and 20 ft. width without permission. Probably he has learnt better by this time.

An abnormal indivisible load is one that cannot without excessive expense or risk of damage be separated into two or more loads for conveyance by road and cannot, because of its size or weight, be conveyed by a heavy motorcar or trailer which meets the requirements of the Construction and Use Regulations. Although certain of these restrictions have been modified and now the overall width must not exceed 9 ft. 6 in. except when the load is carried by a trailer, in which case the width limit is 20 ft.

The total weight must not exceed 150 tons and the weight on any road wheel I li tons, except in the case of heavy motorcars first registered, or trailers bought, before January I, 1952.

Where any authorized vehicle exceeds 8 ft. in width, the load exceeds this figure or where the gross weight is over 75 tons, the owner must give two clear days' notice, excluding Sundays and Bank Holidays, to the chief officer of tin police in every district through which the journey is to be made, and a special form carrying an indemnity must be completed. If, however, the width does not exceed 9 ft. 6 in. and the laden weight is not greater than 75 tons, no such notice is required, except for roads where trams are operated.

Where a special-type vehicle has a gross weight of over 75 tons, six clear days' notice on a special form must be given to every highway or bridge authority concerned. Special restrictions apply to all roads within a three-mile radius of Charing Cross, as well as to many others .beyond this area, but a dispensation can be obtained from the City of London police in cases of extreme urgency.

I am puzzled by the statement of Lord Lucas that a fee should be paid for loads in excess of those prescribed by the regulations, as these, as already said, do permit abnormal loads up to 150 tons.

The Ministry of Transport also clearly state that loads of over this weight may be moved if all conditions are favourable, that the Ministry is satisfied that the movement is unavoidable and that the routes are practicable.

In such cases, a special Order is necessary. Therefore, as practically all loads can be authorized, how does Lord Lucas propose to tax something which, in point of fact, does not exist?

The suggestion of Lord Lucas that ships' propellers should be carried vertically seemed to prove a limited knowledge of the subject. _1 have had to carry such propellers to Barrow-in-Furness and Sunderland. When I entered the works at Sunderland, the vehicle had to negotiate a bridge 10 ft. high, whilst en route to Barrowin-Furness, there was another bridge lift, high.

Apart from this, a propeller is a comparatively delicate article. It must not be chained or tied with wire, or lifted by jacks, and in any case lifted only by special clamps supplied by the makers. How, then, would Lord Lucas suggest securing a propeller vertically on a lowloader? Assuming that a sub-frame had to be employed, this would obviously entail much expense, because propellers are of many dimensions.

The men who undertake this kind of work are proud of their ability. They have to be resourceful and fully conversant with all types of load, and they invariably succeed in taking these huge vehicles to their destination under conditions which would appal most drivers.

February 25, under the heading, "Break the Lawbreakers" is an interesting and exceedingly tru picture of conditions existing, fortunately in the ca. e of a minority, in the road haulage industry.

I would like to take the liberty of asking why this matter is now being given publicity and causing concern in road haulage when it has been going on in private coach firms for years.

The smaller operators, who do not become union are the culprits, and they collectively outnumber the larger firms who observe proper working conditions and rates of pay, etc.

As there is no statutory law covering this side of transport, it is easy for the unscrupulous operator to exploit men, and, believe me, they do this to the fullest extent. They flagrantly disregard Section 19 of the Road Traffic Act, 1934, and I can prove that some firms in this area have worked their employees for 20 hours straight off. As men come and go so frequently in this business, it is difficult to attain unity and to get them to join a union. Some of the firms will not employ union men.

I would say about this side of transport tha it is a disgrace to transport in general and is a danger to road safety. Such facts are not being given enough p blicity. Those who ought to be concerned, including the inistry of Transport, do not seem to want to probe in o these activities nor to rectify them. Why?

With the excellent conditions enjoyed by the ajority of workers today, why is this side of transport so backward?

SAW with interest, in The Commercial Motor of January 28. a paragraph concerning wheel-wobble on a bus.

We had the same trouble with one of ours, a 1948 Commer Commando coach. This vehicle had a severe steering wobble at speeds of 36-39 m.p.h. As in the case of your correspondent, we checked everything and renewed all the worn parts of the steering, but still the wobble continued. As a last resource we rem ved the two front tyres, which were retreads, and fitted wo new ones. Immediately the wobble disappeared and has not returned.