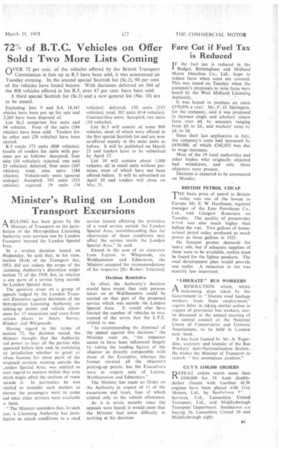 Page 35, 11th March 1955 — Fare Cut if Fuel Tax is Reduced
Close
Noticed an error?
If you've noticed an error in this article please click here to report it so we can fix it.
Keywords : Fuel Tax, Taxation, Transport, Labor

IF the fuel tax is reduced in the I Budget, Birmingham and Midland Motor Omnibus Co.; Ltd., hope to reduce fares when costs are covered. This was stated on Tuesday when the company's proposals to raise fares were heard by the West Midland Licensing

It was hoped to produce an extra £370,056 a year Mr.. F. D. Herington, for the company, said it was proposed to increase single and scholars' return fares over 4d. by amounts ranging from fd. to 2d., and workers' rates by id. to 3d.

Most of the 19 local authorities and other bodies who originally objected had withdrawn, and only three objectors were present.

Decision is expected to be announced on Monday.

THE basic price of petrol in Britain today was one of the lowest in Europe; Mr. E. W. Hardiman, regional manager of the Esso Petroleum Co., Ltd., told Glasgow Rotarians on Tuesday. The quality of present-day nr/rol was also much higher than before the war. Two gallons of homerefined petrol today produced as much power as three gallons in 1925, He forecast greater demands for heavy oils, but if adequate supplies of these were to be available, outlets must be found for the lighter products. The road development plan would provide one outlet. A reduction in tax was scarcely less important.

riA RESOLUTION which, •whilst welcoming steps taken by the Government to liberate road haulage workers from State employment." regrets delay in taking similar action in respect of provincial bus workers, may be discussed at the annual meeting of the central council of the National Union of Conservative and Unionist Associations, to be held in London next week.

It has been framed by Mr. A. Tegerdine, secretary and founder of the Bus Workers' Anti-Nationalization Society. . He wishes the Minister of Transport to remedy "this anomalous position."