BUILDING FOR THE FUTUR 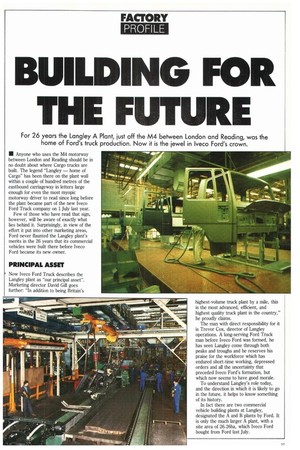 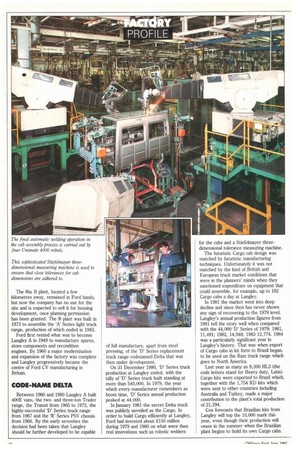 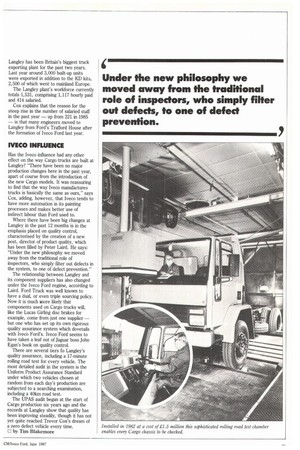 Page 113, 11th June 1987 — BUILDING FOR THE FUTUR
Close
Noticed an error?
If you've noticed an error in this article please click here to report it so we can fix it.
Keywords : Fiat, Iveco, Ford Motor Company, Truck, Ford Cargo, Ford Of Britain

• Anyone who uses the M4 motorway between London and Reading should be in no doubt about where Cargo trucks are built. The legend "Langley — home of Cargo" has been there on the plant wall within a couple of hundred metres of the eastbound carriageway in letters large enough for even the most myopic motorway driver to read since long before the plant became part of the new Iveco Ford Truck company on 1 July last year.

Few of those who have read that sign, however, will be aware of exactly what lies behind it. Surprisingly, in view of the effort it put into other marketing areas, Ford never flaunted the Langley plant's merits in the 26 years that its commercial vehicles were built there before Iveco Ford became its new owner. highest-volume truck plant by a mile, this is the most advanced, efficient, and highest quality truck plant in the country," he proudly claims.

The man with direct responsibility for it is Trevor Cox, director of Langley operations. A long-serving Ford Truck man before Iveco Ford was formed, he has seen Langley come through both peaks and troughs and he reserves his praise for the workforce which has endured short-time working, depressed orders and all the uncertainty that preceded Iveco Ford's formation, but which now seems to have good morale. To understand Langley's role today, and the direction in which it is likely to go in the future, it helps to know something of its history.

In fact there are two commercial vehicle building plants at Langley, designated the A and B plants by Ford. It is only the much larger A plant, with a site area of 26.26ha, which Iveco Ford bought from Ford last July. The 8ha B plant, located a few kilometres away, remained in Ford hands, but now the company has no use for the site and is expected to sell it for housing development, once planning permission has been granted. The B plant was built in 1973 to assemble the 'A' Series light truck range, production of which ended in 1983.

Ford first rented what was to become Langley A in 1949 to manufacture spares, store components and recondition engines. By 1960 a major modernisation and expansion of the factory was complete and Langley progressively became the centre of Ford CV manufacturing in Britain.

Between 1960 and 1980 Langley A built 400E vans, the twoand three-ton Trader range, the Transit from 1965 to 1972, the highly-successful 'D' Series truck range from 1967 and the 'R' Series PSV chassis from 1966. By the early seventies the decision had been taken that Langley should be further developed to be capable of full manufacture, apart from steel pressing, of the 'D' Series replacement truck range codenamed Delta that was then under development.

In January 1981 the secret Delta truck was publicly unveiled as the Cargo. In order to build Cargo efficiently at Langley, Ford had invested about 2150 million during 1979 and 1980 on what were then real innovations such as robotic welders for the cabs and a Stiefelrnayer threedimensional tolerance measuring machine.

The futuristic Cargo cab design was matched by futuristic manufacturing techniques. Unfortunately it was not matched by the kind of British and European truck market conditions that were in the planners' minds when they sanctioned expenditure on equipment that could assemble, for example, up to 192 Cargo cabs a day at Langley.

Last year as many as 9,300 HL3 (the code letters stand for Heavy duty, Latin) Cargo kits were exported to Brazil which, together with the 1,754 KD kits which were sent to other countries including Australia and Turkey, made a major contribution to the plant's total production of 21,294.

Cox forecasts that Brazilian kits from Langley will top the 10,000 mark this year, even though their production will cease in the summer when the Brazilian plant begins to build its own Cargo cabs. Langley has been Britain's biggest truck exporting plant for the past two years. Last year around 3,000 built-up units were exported in addition to the KD kits, 2,500 of which went to mainland Europe.

Cox explains that the reason for the steep rise in the number of salaried staff in the past year — up from 221 in 1985 — is that many engineers moved to Langley from Ford's Trafford House after the formation of Iveco Ford last year.

Has the Iveco influence had any other effect on the way Cargo trucks are built at Langley? "There have been no major production changes here in the past year, apart of course from the introduction of the new Cargo models. It was reassuring to find that the way Iveco manufactures trucks is basically the same as ours," says Cox, adding, however, that Iveco tends to have more automation in its painting processes and makes better use of indirect labour than Ford used to.

Where there have been big changes at Langley in the past 12 months is in the emphasis placed on quality control, characterised by the creation of a new post, director of product quality, which has been filled by Peter Laird, He says: "Under the new philosophy we moved away from the traditional role of inspectors, who simply filter out defects in the system, to one of defect prevention."

The relationship between Langley and its component suppliers has also changed under the Iveco Ford regime, according to Laird. Ford Truck was well known to have a dual, or even triple sourcing policy. Now it is much nore likely that components used on Cargo trucks will, like the Lucas Girling disc brakes for example, come from just one supplier — but one who has set up its own rigorous quality assurance system which dovetails with Iveco Ford's. Iveco Ford seems to have taken a leaf out of Jaguar boss John Egan's book on quality control.

There are several tiers fo Langley's quality assurance, including a 17-minute rolling road test for every vehicle. The most detailed audit in the system is the Uniform Product Assurance Standard under which two vehicles chosen at random from each day's production are subjected to a searching examination, including a 40km road test.

The UPAS audit began at the start of Cargo production six years ago and the records at Langley show that quality has been improving steadily, though it has not yet quite reached Trevor Cox's dream of a zero defect vehicle every time. CI by Tim Blakemore