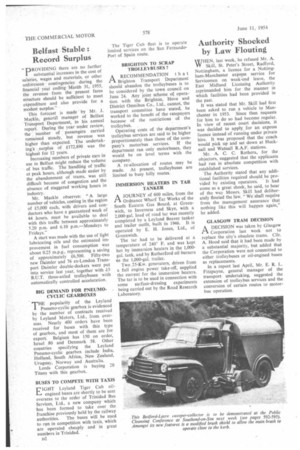 " DROVIDING there are no further substantial increases in the cost of salaries, wages and materials, or other unforeseen contingencies during the financial year ending March 31, 1955, the revenue from the present fares structure should be sufficient to meet expenditure and also provide for a modest surplus."

This forecast is made by Mr. J. Mackie, general manager of Belfast Transport Department, in his annual report. During the year under review, the number of passengers carried remained steady, but revenue was higher than expected. The undertaking's ,surplus of £172,890 was the highest for 12 years.

Increasing numbers of private cars in use in Belfast might reduce the volume of bus traffic. The handling of traffic at peak hours, although made easier by the abandonment of trams, was still difficult because of congestion and the absence of staggered working hours in industry.

Mr. Mackie observes: "A large number of vehicles, costing in the region of £5,000 each, with drivers and conductors who have a guaranteed week of 44 hours, must be available to deal with this traffic between approximately 5.20 p.m. and 6.10 p.m.—Mondays to Fridays."

A start was made with the use of light lubricating oils and the estimated improvement in fuel consumption was about 0.25 m.p.g., representing a saving of approximately £6,500. Fifty-two new Daimler and 76 ex-London Transport Daimler double-deckers were put into service last year, together with .13 B.U.T. three-axled trolleybuses with automatically controlled acceleration.

THEpopularity of the Leyland Pneumo-cyclic gearbox is evidenced by the number of contracts received by Leyland Motors, Ltd., from overseas. Nearly 400 orders have been received for buses with this type of gearbox, and most of them are for export. Belgium has 150 on order, Israel 80 and Denmark 58. Other countries specifying the Leyland Pneumo-cyclic gearbox include India, Holland, South Africa, New Zealand, Uruguay, Norway and Australia.

Leeds Corporation is buying 20 Titans with this gearbox.

BUSES TO COMPETE WITH TAXIS IGHT Leyland Tiger Cub oilengined buses arc shortly to be sent overseas to the order of Trinidad Bus Services, Ltd., a new company which has been formed to take over the franchise previously held by the railway

authorities. The buses will be used to run in competition with taxis, which are operated cheaply and in great numbers in Trinidad.

D2 The Tiger Cub fleet is to operate limited services on the San FernandoPort of Spain route.

A RECOMMENDATION t hat 1-1, Brighton Transport Department should abandon the trolleybuses is to be considered by the town council on June 24. Any joint scheme of operation with the Brighton, Hove and District Omnibus Co., Ltd., cannot, the transport committee have stated, be worked to the benefit of the ratepayers because of the restrictions of the trolley bus.

A re-allocation of routes may be made. At present, trolleybuses are limited to busy hilly routes.

A JOURNEY of 600 miles, from the 1-1, Ordnance Wharf Tar Works of the South Eastern Gas Board, at Greenwich, to Inverness and Skye, with a 2,000-gal. load of road tar was recently completed by a Leyland Beaver tanker and trailer outfit, built in 1946. It is operated by E. H. Jones, Ltd., of Greenwich.

The tar had to be delivered at a temperature of 240° F. and was kept hot by immersion heaters in the 1,000gal, tank, and by Rutherford oil burners in the 1,000-gal, trailer.

Two 25-Kw. generators, driven from a full engine power take-off, supplied the current for the immersion heaters. The tar is to be used in connection with some surface-dressing experiments being carried out by the Road Research Laboratory.