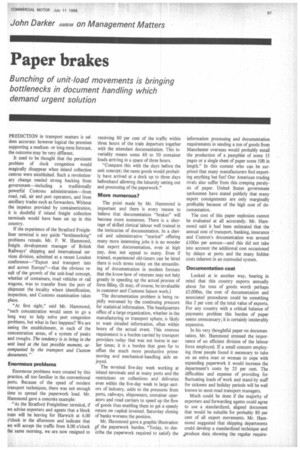 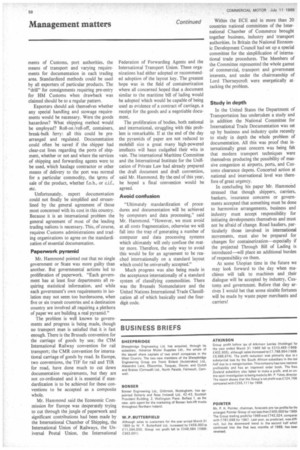 PREDICTION in transport matters is seldom accurate: however logical the premises supporting a mediumor long-term forecast, the outcome may be very different.

It used to be thought that the persistent problem of dock congestion would magically disappear when inland collection centres were established. Such a revolution-' ary change needed strong backing from government—including a traditionally powerful Customs administration—from road, rail, air and port operators, and from ancillary trades such as forwarders. Without the impetus provided by containerization, it is doubtful if inland freight collection terminals would have been set up in this country.

If the experience of the Stratford Freightliner terminal is any guide "bottlenecking" problems remain. Mr. F. W. Hammond, freight development manager of British Railways' shipping and international ser vices division, admitted at a recent London conference—"Export and transport into and across Europe"—that the obvious re sult of the growth of the unit-load concept, whether of containers, road vehicles or rail wagons, was to transfer from the port of shipment the locality where identification, inspection, and Customs examination takes plane.

"At first sight," said Mr. Hammond, "such concentration would seem to go a long way to help solve port congestion problems, but what in fact happens? We are seeing the establishment, in each of the concentration areas, of a system of peaks and troughs. The tendency is to bring in the unit load at the last possible moment, accompanied by the transport and Custom documents."

Enormous problems were created by this practice, all too familiar in the conventional ports. Because of the speed of modern transport techniques, there was not enough time to spread the paperwork load. Mr. Hammond gave a concrete example: "At the Stratford Freightliner terminal, if we advise exporters and agents that a block train will be leaving for Harwich at 6.00 o'clock in the afternoon and indicate that we will accept the traffic from 8.00 o'clock the same morning, we are now resigned to receiving 80 per cent of the traffic within three hours of the train departure together with the attendant documentation. This invariably means some 40 to 50 container loads arriving in a space of three hours.

"Compare this with the days before the unit concept; the same goods would probably have arrived at a dock up to three days beforehand allowing the leisurely setting out and processing of the paperwork."

The point made by Mr. Hammond is important and there is every reason to believe that documentation "brakes" will become more numerous. There is a shortage of skilled clerical labour well trained in the intricacies of documentation. In a clerical and administrative "market" offering many more interesting jobs it is no wonder that export documentation, even at high pay, does not appeal to many. Even if trained, experienced old-timers can be hired there is such stress today on the streamlining of documentation in modern formats that the know-how of veterans may not help greatly in speeding up the actual process of form filling. (It may, of course, be invaluable in customer and Customs liaison work.) The documentation problem is being rapidly worsened by the continuing pressure for statistical information. The headquarters office of a large organization, whether in the manufacturing or transport sphere, is likely to want detailed information, often within hours of the actual event. This onerous requirement is a burden carried by transport providers today that was not borne in earlier times; it is a burden that goes far to offset the much more productive primemoving and mechanical-handling aids enjoyed.

The nominal five-day week working at inland terminals and at many ports and the restrictions on collections and deliveries even within the five-day week in large sectors of industry, adds to the pressures from ports, railways, shipowners, container operators and road carriers to speed up the flow of goods thus enabling them to get a speedy return on capital invested. Saturday closing of banks worsens the position.

Mr. Hammond gave a graphic illustration pf the paperwork burden. "Today, to describe the paperwork required to satisfy the information processing And documentation requirements in sending a ton of goods from Manchester overseas would probably entail the production of a pamphlet of some 15 pages or a single sheet of paper some 10ft in length." In this context who can be surprised that many manufacturers find exporting anything but fun! Our American trading rivals also suffer from this creeping paralysis of paper. United States government spokesmen have stated publicly that many export consignments are only marginally profitable because of the high cost of documentation.

The cost of this paper explosion cannot be evaluated at all accurately. Mr. Hammond said it had been estimated that the annual cost of transport, banking, insurance and Custom's documentation was around .E100m per annum—and this did not take into account the additional cost occasioned by delays at ports and the many hidden costs inherent in an outmoded system.

Looked at in another way, bearing in mind that this country exports annually about 5m tons of goods, worth perhaps £5,000m, the cost of documentation and associated procedures could be something like 2 per cent of the total value of exports. For any country with a critical balance of payments problem this burden of paper seems unnecessary; it is certainly intolerably expensive.

In his very thoughtful paper on documentation, Mr. Hammond stressed the importance of an efficient division of the labour force employed. If a small concern employing three people found it necessary to take on an extra man or woman to cope with expanding paperwork it would increase the department's costs by 25 per cent. The difficulties and expense of providing for fluctuating loads of work and stand-by staff for sickness and holiday periods will be well known to most road transport managers.

Much could be done if the majority of exporters and forwarding agents could agree to use a standardized, aligned document that would be suitable for probably 80 per cent of all export movements. Mr. Hammond suggested that shipping departments could develop a standardized technique and ,produce data showing the regular require ments of Customs, port authorities, the means of transport and varying requirements for documentation in each trading area. Standardized methods could be used by all exporters of particular products. The "drill" for consignments requiring pre-entry for HM Customs when drawback was claimed should be to a regular pattern.

Exporters should ask themselves whether any special handling and stowage requirements would be necessary. Were the goods hazardous? What shipping method would be employed? Roll-on/roll-off, containers, break-bulk ferry: all this could be prearranged and regulated. Documentation could often be saved if the shipper had clear-cut lines regarding the ports of shipment, whether or not and where the services of shipping and forwarding agents were to be used, which haulage contractor or other means of delivery to the port was normal for a particular commodity, the terms of sale of the product, whether f.o.b.. or c.i.f.. etc.

Unfortunately. export documentation could not finally be simplified and streamlined by the general agreement of those most concerned with its cost in this country. Because it is an international problem the general agreement of most of the leading trading nations is necessary. This, of course, requires Customs administrations and trading organizations to agree on the standardization of essential documentation.

Paperwork pyramid Mr. Hammond pointed out that no single government or State was more guilty than another. But governmental actions led to proliferation of paperwork. "Each government has at least four departments all requiring statistical information, and while each government's own requirements in isolation may not seem too burdensome, when five or six transit countries and a destination country are involved all requiring a plethora of paper we are building a real pyramid."

The problem is well known to governments and progress is being made, though no transport man is satisfied that it is fast enough. There is the Brussels convention for the carriage of goods by sea; the CIM International Railway convention for rail transport; the CMR convention for international carriage of goods by road. In Europe, two conventions, the TIF for rail and TIR for road, have done much to cut down documentation requirements, but they are not co-ordinated and it is essential if standardization is to be achieved for these conventions to be accepted as a composite whole.

Mr. Hammond said the Economic Commission for Europe was desperately trying to cut through the jungle of paperwork and significant contributions had been made by the International Chamber of Shipping, the International Union of Railways, the Universal Postal Union, the International Federation of Forwarding Agents and the International Transport Union. These organizations had either adopted or recommended adoption of the layout key. The greatest hope was in the field of containerization where all concerned hoped that a document similar to the maritime bill of lading would be adopted which would be capable of being used as evidence of a contract of carriage, a receipt for the goods and a negotiable document.

The proliferation of bodies, both national and international, struggling with this problem is remarkable. If at the end of the day the pyramids of paper are not reduced to molehill size a great many high-powered intellects will have cudgelled their wits in vain. The international Maritime Committee and the International Institute for the Unification of Private Law had already prepared the draft document and draft convention, said Mr. Hammond. By the end of this year, he hoped a final convention would be agreed.

"Ultimately standardization of procedures and documentation will be achieved by computers and data processing," said Mr. Hammond. "However, we must avoid at all costs fragmentation, otherwise we will fall into the trap of generating a number of computer and data processing systems which ultimately will only confuse the matter more. Therefore, the only way to avoid this would be for an agreement to be reached internationally on a standard layout which could be universally accepted."

Much progress was also being made in the acceptance internationally of a standard system of classifying commodities. There was the Brussels Nomenclature and the United Nations International Trade Classification all of which basically used the fourdigit code. Within the ECE and in more than 20 countries national committees of the International Chamber of Commerce brought together business, industry and transport authorities. In Britain the National Economic Development Council had set up a special committee for the simplification of international trade procedures. The Members of the Committee represented the whole gamut of commercial, transport and government interests, and under the chairmanship of Lord Thorneycroft were energetically attacking the problem.

Study in depth In the United States the Department of Transportation has undertaken a study and in addition the National Committee for International Trade Documentation was set up by business and industry quite recently to study in depth the whole problem of documentation. All this was proof that internationally great concern was being felt that modern transport techniques were themselves producing the possibility of massive congestion at airports, ports, and Customs clearance depots. Concerted action at national and international level was therefore of great urgency.

In concluding his paper Mr. Hammond stressed that though shippers, carriers, bankers, insurance concerns or governments accepted that something must be done to harmonize arrangements, business and industry must accept responsibility for initiating developments themselves and must not be afraid of change. Road hauliers, particularly those involved in international movements, must also be prepared for changes for containerization—especially if the projected Through Bill of Lading is introduced—will place an additional burden of responsibility on them.

At some Utopian time in the future we may look forward to the day when machines will talk to machines and their dialogue will be accepted by industry, Customs and government. Before that day arrives I would bet that some sizable fortunes will be made by waste paper merchants and carriers!