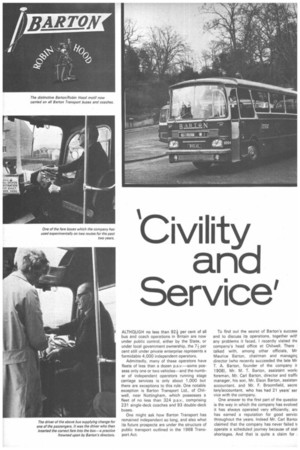 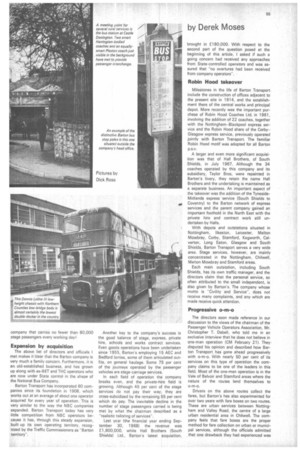 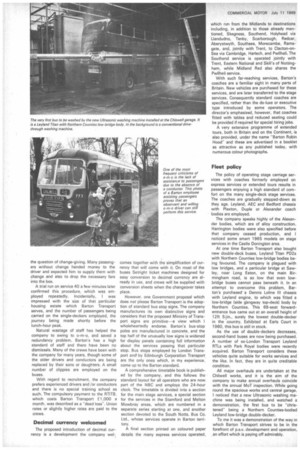 ALTHOUGH no less than 921 per cent of all bus and coach operations in Britain are now under public control, either by the State, or under local government ownership, the 7+ per cent still under private enterprise represents a formidable 4.000 independent operators.

Admittedly, many of these operators have fleets of less than a dozen p.s.v.--some possess only one or two vehicles—and the number of independent operators running stage carriage services is only about 1,000 but there are exceptions to this rule. One notable exception is Barton Transport Ltd., of Chilwell, near Nottingham, which possesses a fleet of no less than 324 p.s.v., comprising 231 single-deck coaches and 93 double-deck buses.

One might ask how Barton Transport has remained independent so long, and also what its future prospects are under the structure of public transport outlined in the 1968 Transport Act, To find out the secret of Barton's success and to discuss its operations, together with any problems it faced. I recently visited thE company's head office at Chilwell. There I talked with, among other officials, Mr Maurice Barton, chairman and managinc director (who recently succeeded the late Mr T. A. Barton, founder of the company ir 1908), Mr. M. T. Barton. assistant work: foreman, Mr. Carl Barton, director and traffir manager, his son, Mr. Elson Barton, assistan accountant, and Mr. F. Broomfield, secre tary/accountant, who has had 21 years' ser vice with the company.

One answer to the first part of the questior is the way in which the company has evolved it has always operated very efficiently, ant has earned a reputation for good servicr throughout the years. Indeed Mr. Carl Bartoi claimed that the company has never failed ti operate a scheduled journey because of stal shortages. And that is quite a claim for ; company that carries no fewer than 80,000 stage passengers every working day!

The above list of directors and officials I met makes it blear that the Barton company is very much a family concern. Furthermore, it is an old-established business, and has grown up along with ex-BET and THC operators who are now under State control in the shape of the National Bus Company.

Barton Transport has incorporated 60 companies since its foundation in 1908, which works out at an average of about one operator acquired for every year of operation. This is very similar to the way the NBC companies expanded. Barton Transport today has very little competition from NBC operators because it has, through this steady expansion, built up its own operating territory, recognized by the Traffic Commissioners as "Barton territory". Another key to the company's success is the good balance of stage, express, private hire, schools and works contract services. Even goods operations have been undertaken since 1955, Barton's employing 15 AEC and Bedford lorries, some of them articulated outfits, on general haulage. Some 75 per cent of the journeys operated by the passenger vehicles are stage-carriage services.

In each field of operation the company breaks even, and the private-hire field is growing. Although 45 per cent of the stage services do not pay their way, they are cross-subsidized by the remaining 55 per cent which do pay. The inevitable decline in the number of stage passengers carried is being met by what the chairman described as a "realistic tailoring of services".

Last year the financial year ending September :30, 19681 the revenue was £1,800,000, while Hall Brothers (South Shields) Ltd., Barton's latest acquisition, brought in £180,000. With respect to the second part of the question posed at the beginning of this article, I asked if such a going concern had received any approaches from State-controlled operators and was assured that "no overtures had been received from company operators".

Milestones in the life of Barton Transport include the construction of offices adjacent to the present site in 1914, and the establishment there of the central works and principal depot. More recently was the important purchase of Robin Hood Coaches Ltd. in 1961, involving the addition of 22 coaches, together with the Nottingham—Blackpool express ser vice and the Robin Hood share of the Corby-Glasgow express service, previously operated jointly with Barton Transport. The familiar Robin Hood motif was adopted for all Barton p.s.v.

A larger and even more significant acquisition was that of Hall Brothers, of South Shields, in July 1967. Although the 34 coaches operated by this company and its subsidiary, Taylor Bros, were repainted in Barton's livery, they retain the name Hall Brothers and the undertaking is maintained as a separate business. An important aspect of the takeover was the addition of the Tyneside Midlands express service (South Shields to Coventry) to the Barton network of express services and the parent company gained an important foothold in the North East with the private hire and contract work still undertaken by Halls.

Each main outstation, including South Shields, has its own traffic manager, and the directors claim that the personal service, so often attributed to the small independent, is also given by Barton's. The company whose

motto is -Civility and Service", does not receive many complaints, and any which are made receive quick attention.

The directors soon made reference in our discussion to the views of the chairman of the Passenger Vehicle Operators Association, Mr. Christopher T. Dabell, who told me in an exclusive interview that he does not believe in one-man operation (CM February 211. They.

disputed his opinion and described how Barton Transport has gone ahead progressively with o-m-o. With nearly 50 per cent of its services on this type of operation the company claims to be one of the leaders in this field. Most of the one-man operation is in the Vale of Belvoir and Stamford areas where the nature of the routes lend themselves to o-m-o.

Drivers on the above routes collect the fares, but Barton's has also experimented for over two years with fare boxes on two routes. These are urban services between Nottingham and Valley Road, the centre of a large urban residential area in Chilwell. The company feels that fare boxes are the proper method for fare collection on urban or municipal services, although the officials admitted that one drawback they had experienced was the question of change-giving. Many passengers without change handed money to the driver and expected him to supply them with change and also to drop the necessary fare into the box.

A trial run on service 40 a few minutes later confirmed this procedure, which was em ployed repeatedly. Incidentally, I was impressed with the size of that particular housing estate which Barton Transport serves, and the number of passengers being carried on the single-deckers employed, the journey being made shortly before the lunch-hour peak.

Natural wastage of staff has helped the company to swing to o-m-o, and saved a redundancy problem. Barton's has a high standard of staff and there have been no dismissals. Many of the crews have been with the company for many years, though some of the older drivers and conductors are being replaced by their sons or daughters. A small number of clippies are employed on the buses.

With regard to recruitment, the company prefers experienced drivers and/or conductors and there is no special training school as such. The compulsory payment to the RTITB, which costs Barton Transport €1,000 a month, was described as a "dead loss". Union rates or slightly higher rates are paid to the crews.

The proposed introduction of decimal currency is a development the company wel-.

comes together with the simplification of currency that will come with it. On most of the buses Setright ticket machines designed for easy conversion to decimal currency are already in use, and crews will be supplied with conversion sheets when the changeover takes place.

However. one Government proposal which does not please Barton Transport is the adoption of standard bus stop signs. The company manufactures its own distinctive signs and considers that the proposed Ministry of Transport signs are primitive—a view which I wholeheartedly endorse. Barton's bus-stop poles are manufactured in concrete, and the top half of the unusually low signs is widened for display panels containing full information about the services passing that particular stop. Bus stops employed by London Transport and by Edinburgh Corporation Transport are the only ones which, in my experience, come up to the Barton standard.

A comprehensive timetable book is published by the company, and this follows the standard layout for all operators who are now. part of the NBC and employs the 24-hour clock. The timetable is divided into a section for the main stage services, a special section for the services in the Stamford and Melton Mowbray areas, which are numbered in a separate series starting at one, and another section devoted to the South Notts. Bus Co. Ltd., whose services operate in Barton territory.

A final section printed on coloured paper details the many express services operated, which run from the Midlands to destinations including, in addition to those already men tioned, Skegness, Southend, Holyhead via 'Llandudno, Tenby, Scarborough, Redcar, Aberystwyth, Southsea, !Morecambe, Ramsgate, and, jointly with Trent, to Clacton-onSea via Cambridge, Harlech, and PwIlheli. The Southend service is operated jointly with Trent, Eastern National and Skill's of Nottingham, while Midland Red also shares the PwIlheli service.

With such far-reaching services, Barton's coaches are a familiar sight in many parts of Britain. New vehicles are purchased for these services, and are later transferred to the stage services. Consequently standard coaches are specified, rather than the de-luxe or executive type introduced by some operators. The director's emphasized, however, that coaches fitted with tables and reduced seating could be provided if required for special hiring jobs.

A very extensive programme of extended tours, both in Britain and on the Continent, is also provided, under the name "Barton Robin Hood" and these are advertised in a booklet as attractive as any published today, with numerous colour photographs.

The policy of operating stage carriage services with coaches formerly employed on express services or extended tours results in passengers enjoying a high standard of comfort on the many single-deck stage services. The coaches are gradually stepped-down as they age. Leyland, AEC and Bedford chassis with Plaxton, Duple or Alexander coach bodies are employed.

The company speaks highly of the Alexander bodies, which are of alloy construction. Harrington bodies were also specified before that company ceased production, and I noticed some smart 1965 models On stage services in the Castle Donington area.

At one time Barton Transport also bought new double-deck buses, Leyland Titan PD2s with Northern Counties low-bridge bodies being favoured. The company is plagued with low bridges, and a particular bridge at Sawley, near Long Eaton, on the main Birmingham road, is so low that even lowbridge buses cannot pass beneath it. In an attempt to overcome this problem, Barton's purchaseda Dennis Loline ill chassis with Leyland engine, to which was fitted a low-bridge (side Ongway top-deck) body by Northern Counties. This 69-seat forwardentrance bus came out at an overall height of 12ft 5fin., surely the lowest double-decker in the country. Exhibited at Earls Court in 1960, this bus is still in stock.

As the use of double-deckers decreases, second-hand buses are now being purchased. A number of ex-London Transport Leyland RTLs with Park Royal bodies were recently acquired. Barton Transport considers these vehicles quite suitable for works services and the like. In fact, they are in quite creditable condition.

All major overhauls are undertaken at the Chilwell works, and it is the aim of the company to make annual overhauls coincide with the annual MoT inspection. While going round the spacious works and central garage, I noticed that a new Ultrasonic washing machine was being installed, and watched a demonstration, the first bus to be "christened" being a Northern Counties-bodied Leyland low-bridge double-decker.

To me it was a demonstration of the way in which Barton Transport strives to be in the forefront of p.s.v. development and operation, an effort which is paying off admirably.