How established hauliers have taken advantage of the 1968 Act 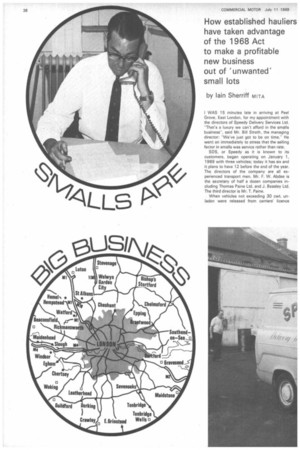 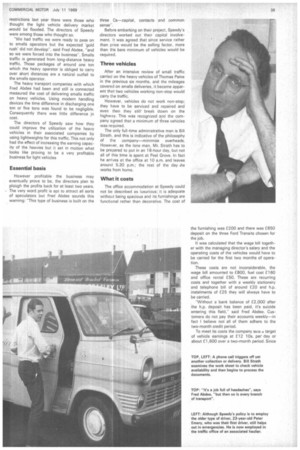 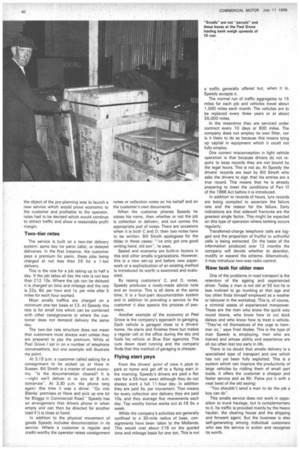 Page 40, 11th July 1969 — How established hauliers have taken advantage of the 1968 Act
Close
Noticed an error?
If you've noticed an error in this article please click here to report it so we can fix it.
Keywords : Transport, Road Transport, Euphemisms, Smalls, Traffic, Speedy Delivery

to make a profitable new business out of 'unwanted' small lots

I WAS 15 minutes late in arriving at Peel Grove, East London, for my appointment with the directors of Speedy Delivery Services Ltd. "That's a luxury we can't afford in the smalls business", said Mr. Bill Strath, the managing director: "We've just got to be on time." He went on immediately to stress that the selling factor in smalls was service rather than rate.

SOS, or Speedy as it is known to its customers, began operating on January 1, 1969 with three vehicles; today it has six and it plans to have 12 before the end of the year. The directors of the company are all experienced transport men. Mr. F. W. Abdee is the secretary of half a dozen companies including Thomas Paine Ltd. and J. Beasley Ltd. The third director is Mr. T. Paine.

When vehicles not exceeding 30 cwt. unladen were released from carriers' licence restrictions last year there were those who thought the light vehicle delivery market .would be flooded. The directors of Speedy were among those who thought so.

-We had traffic we were ready to pass on to smalls operators but the expected 'gold rush' did not develop", said Fred Abdee, ''and so we were forced into the business''. Smalls traffic is generated from long-distance heavy traffic. Those packages of around one ton which the heavy operator is obliged to carry over short distances are a nataral outfall to the smalls operator.

The heavy transport companies with which Fred Abdee had been and still is connected measured the cost of delivering smalls traffic on heavy vehicles. Using modern handling devices the time difference in discharging one ton or five tons was found to be negligible. Consequently there was little difference ,in cost.

The directors of Speedy saw how they could improve the utilization of the heavy vehicles in their associated companies by using lightweights for this traffic. This not only had the effect of increasing the earning capacity of the heavies but it set in motion what looks like proving to be a very profitable business for light vehicles

However profitable the business may eventually prove to be, the directors plan to plough the profits back for at least two years. The very word profit is apt to attract all sorts of speculators but Fred Abdee sounds this warning: "This type of business is built on the three Cs—capital, contacts and common sense".

Before embarking on their project, Speedy's directors worked out their capital involvement. It was agreed that since service rather than price would be the selling factor, more than the bare minimum of vehicles would be required.

After an intensive review of small traffic carried on the heavy vehicles of Thomas Paine in the previous six months, and the mileages covered on smalls deliveries, it became apparent that two vehicles working non-stop would carry the traffic.

However, vehicles do not work non-stop; they have to be serviced and repaired and even then they still break down on the highway. This was recognized and the company agreed that a mInimum of three vehicles was required.

The only full-time administrative man is Bill Strath. and this is indicative of the philosophy of the cornPany—minimize overheads. However, as the lone man, Mr. Strath has to be prepared to put in an 18-hour day, but not all of this time is spent at Peel Grove. In fact he arrives at the office at 10 a.m. and leaves around 5.30 p.m.; the rest of the day -he works from home.

The office accommodation at Speedy could not be described as luxurious; it is adequate without being spacious and its furnishings are functional rather than decorative. The cost of the furnishing was £200 and there was £850 deposit on the three Ford Transits chosen for the job.

It was calculated that the wage bill together with the managing director's salary and the operating costs of the vehicles would have to be carried for the first two months of operation.

These costs are not inconsiderable, the wage bill amounted to £800, fuel cost £160 and office rental £50. These are recurring costs and together with a weekly stationery and telephone bill of around £20 and h.p. instalments of £25 they will always have to be carried.

-Without a bank balance of £2,000 after the h.p. deposit has been paid, it's suicide entering this field," said Fred Abdee. Customers do not pay their accounts weekly—in fact I believe not all of them adhere to the two-month credit period.

To meet its casts the company sets d target of vehicle earnings at £12 10s. per day or about £1,600 over a two-month period. Since

the object of the pre-planning was to launch a new service which would prove economic to the customer and profitable to the operator, rates had to be devised which would continue to attract traffic and show a reasonable profit margin.

The service is built on a two-tier delivery system: same day (or panic calls), or delayed deliveries. In the first instance, the customer pays a premium for panic, these jobs being charged at not less than £6 for a 1-ton delivery.

This is the rate for a job taking up to half a day, If the job takes all day the rate is not less than £12 10s. Where the job can be delayed it is charged on time and mileage and the rate is 22s. 6d. per hour and is, per mile after 5 miles for each hour worked.

Most smalls traffics are charged on a minimum one-ton basis at £3. At Speedy this rate is for small lots which can be combined with other consignments or where the customer does not demand delivery the same day.

The two-tier rate structure does not mean that customers must always wait unless they are prepared to pay the premium. While at Peel Grove I sat in on a number of telephone conversations, but one example will illustrate my point.

At 3.15 p.m. a customer called asking for a consignment. to be picked up at Hove in Sussex. Bill Strath is a master of word economy. "Is the documentation cleared? It is —right well deliver in to you at 8 a.m. tomorrow". At 3.30 p.m. the phone rang again; this time it was a driver. "Go into Blanks' premises at Hove and pick up one lot for Bloggs in Commercial Road." Speedy has an arrangement that drivers phone in when empty and can then be directed for another load if it is close at hand.

In addition to the physical movement of goods Speedy includes documentation in its service. Where a customer is regular and credit-worthy the operator raises consignment notes or collection notes on his behalf and on the customer's own documents, When the customer phones Speedy he states his name, then whether or not the job is collection or deliver', and out comes the appropriate pad of notes. There are occasions when it is both C and 0; then two notes have to be written. Bill Smith apologizes for the delay in these cases: "i've only got one good writing hand, old son", he says.

Speed and economy are built-in factors in this and other smalls organizations. However, this is a new set-up and before new paperwork or a sophistication of an existing method is introduced its worth is examined and evaluated.

By raising customers' C. and CI. notes, Speedy produces a ready-made advice note and an invoice. This is all done at the same time. It is a four-part documentation system and in addition to providing a service to the customer it also speecs the process of payment.

Another example of the economy at Peel Grove is the company's approach to garaging. Each vehicle is garaged close to a drivers' home. He starts and finishes there but makes a regular call at the office during the day and fuels his vehicle at Blue Star agencies. This cuts down dead running and the company finds that this method of garaging is cheaper.

From the drivers' pcint of view it pays to park at home and get off to a flying start in the morning. Speedy's drivers are paid a flat rate for a 55-hour wee e although they do not always work a full 11-hour day. In addition they are paid 5s. per movement. That means for every collection and delivery they are paid 10s. and they average five movements each day. Top weekly bonus works out at £6 5s. a week.

While the company's activities are generally confined to a 30-mile radius of base, consignments have been taken to the Midlands. This would cost about £18 on the quoted time and mileage basis for one ton. This is not a traffic generally offered but, when it is, Speedy accepts it.

The normal run of traffic aggregates to 15 miles for each job and vehicles travel about 1,500 miles each month. The vehicles are to be replaced every three years Or at about 55,000 miles.

In the meantime they are serviced under contract every 10 days or 800 miles. The company does not employ its own fitter, nor is it likely to do so because this means tying up capital in iequipment which it could not fully employ.

One current misconception in light vehicle operation is that because drivers do not require to keep records they are not bound by the legal hours. This is not so. At Speedy the drivers' records are kept by Bill Strath who asks the drivers to sign that his entries are a true record. This means that he is already preparing to meet the conditions of Part VI of the 1968 Act before it is introduced.

In addition to records of hours, tyre records are being compiled to ascertain the failure rate and the reason for the failure. Early indications are that sidewall fractures are the greatest single factor. This might be expected on this type of operation where kerbing occurs regularly.

Transferred-charge telephone calls are logged and the proportion of fruitful to unfruitful calls is being extracted. On the basis of the information produced over 12 months the company will decide whether to abandon, modify or expand the scheme. Alternatively, it may introduce two-way radio control.

One of the problems in road transport is the retention of the ageing and experienced driver. Today a man is not old at 55 but he is less inclined to go trunking at that age and too often finds himself employed as a washer or labourer in the workshop. This is, of course, a criminal waste of experienced manpower. These are the roan who know the quick way round towns, who know how to cut dock delays and who know how to treat a vehicle. "They've rid themselves of the urge to hammer on," says Fred Abdee. This is the type of man Speedy is employing, men who are trained and whose ability and experience are all too often lost too early in life.

There is no doubt that smalls delivery is a specialized type of transport and one which has not yet been fully exploited. This is a system which can improve the productivity of large vehicles by ridding them of small part loads. It offers the customer a cheaper and faster service and as Mr. Paine put it with a neat twist of the old saying: "You shouldn't send a man to do the job a boy can do".

This smalls service does not work in opposition to trunk haulage, but is complementary to it. Its traffic is provided mainly by the heavy haulier, the clearing house and the shipping and forward agent. But the business is also self-generating among individual customers who see the service in action and recognize its worth.