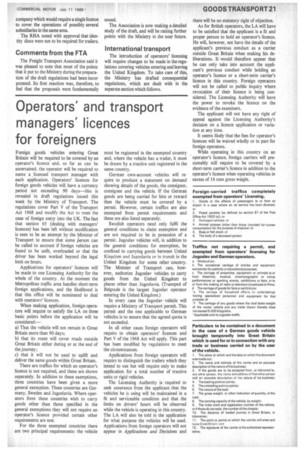 Page 23, 11th July 1969 — Operators' and transport managers' licences for foreigners
Close
Noticed an error?
If you've noticed an error in this article please click here to report it so we can fix it.

Foreign goods vehicles entering Great Britain will be required to be covered by an operator's licence and, so far as can be ascertained, the operator will be required to name a licensed transport manager with each application. Operators' licences for foreign goods vehicles will have a currency period not exceeding 90 days—this is revealed in draft regulations issued this week by the Ministry of Transport. The regulations cover Part V of the Transport Act 1968 and modify the Act to meet the case of foreign entry into the UK. The fact that section 65 (dealing with managers' licences) has been left without modification is seen to be an attempt by the Minister of Transport to ensure that some person can be called to account if foreign vehicles are found to be unfit, overloaded or that the driver has been worked beyond the legal limit on hours.

Applications for operators' licences will be made to one Licensing Authority for the whole of the country. At the moment the Metropolitan traffic area handles short-term foreign applications, and the likelihood is that this office will be nominated to deal with operators' licences.

When making application, foreign operators will require to satisfy the LA on three basic points before the application will be considered:—

a) That the vehicle will not remain in Great Britain more than 90 days;

b) that its route will cover roads outside Great Britain either during or at the end of the journey; c) that it will not be used to uplift and deliver the same goods within Great Britain.

There are traffics for which an operator's licence is not required, and these are shown separately. In addition to these exemptions, three countries have been given a more general exemption. These countries are Germany, Sweden and Jugoslavia. Where operators from these countries wish to carry goods other than those specified in the general exemptions they will not require an operator's licence provided certain other requirements are met.

German own-account vehicles will require to produce a statement on demand showing details of the goods, the consignor, consignee and the vehicle. If the German goods are being carried for hire or reward then the vehicle must be covered by a permit. However, certain traffics are also exempted from permit requirements and these are also listed separately.

In every case the Jugoslav vehicle will require a Ministry of Transport permit. This permit and the one applicable to German vehicles is to ensure that the agreed quota is not exceeded.

In all other cases foreign operators will require to obtain operators' licences and Part V of the 1968 Act will apply. This part has been modified by regulations to meet the circumstances.

Applications from foreign operators will require to distinguish the trailers which they intend to use but will require only to make application for a total number of tractive units or rigid vehicles.

The Licensing Authority is required to seek assurance from the applicant that the vehicles he is using will be maintained in a fit and serviceable condition and that the limits on drivers' hours will be observed while the vehicle is operating in this country. The LA will also be told in the application for what purpose the vehicles will be used. Applications from foreign operators will not appear in Applications and Decisions and there will be no statutory right of objection.

As for British operators, the LA will have to be satisfied that the applicant is a fit and proper person to hold an operator's licence. He will, however, not have the details of the applicant's previous conduct as a carrier outside Great Britain when making his deliberations. It would therefore appear that he can only take into account the applicant's previous conduct while holding an operator's licence or a short-term carrier's licence in this country. Foreign operators will not be called to public inquiry where revocation of their licence is being considered. The Licensing Authority will have the power to revoke the licence on the evidence of the examiners.

The applicant will not have any right of appeal against the Licensing Authority's decision on a licence application or variation at any time.

It seems likely that the fees for operator's licences will be waived wholly or in part for foreign operators.