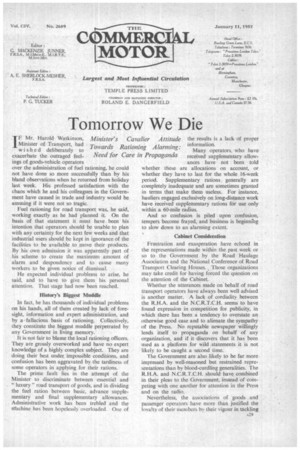 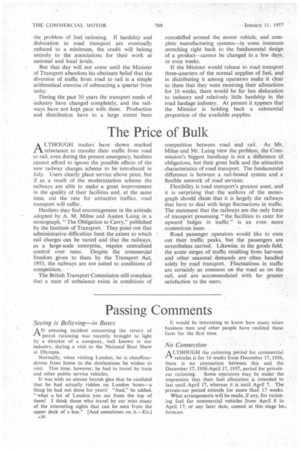 Page 31, 11th January 1957 — Tomorrow We Die
Close
Noticed an error?
If you've noticed an error in this article please click here to report it so we can fix it.
Keywords : Administration, Disaster Preparedness, Rationing, Road Haulage Association, Business, Accountability

IF Mr. Harold Watkinson, Minister of Transport, had wished deliberately to exacerbate the outraged feelings of goods-vehicle operators over the administration of fuel rationing, he could not have done so more successfully than by his bland observations when he returned from holiday last week. His professed satisfaction with the chaos which he and his colleagues in the Government have caused in trade and industry would be amusing if it were not so tragic.

Fuel rationing for road transport was he said, working exactly as he had planned it. On the basis of that statement it must have been his intention that operators should be unable to plan with any certainty for the next few weeks and that industrial users should be kept in ignorance of the facilities to be available to move their products. By his own admission it was apparently part of his scheme to create the maximum amount of alarm and despondency and to cause many workers to be given notice of dismissal.

He expected individual problems to arise, he said, and to have to give them his personal attention. That stage had now been reached.

History's Biggest Muddle In fact, he has thousands of individual problems on his hands, all of them created by lack of foresight, information and expert administration, and by a fallacious basis of rationing. Collectively, they constitute the biggest muddle perpetrated by any Government in living memory.

it is not fair to blame the local rationing officers. They are grossly overworked and have no expert knowledge of a highly complex subject. They are doing their best under impossible conditions, and confusion has been aggravated by the tardiness of some operators in applying for their rations.

The prime fault lies in the attempt of the Minister to discriminate between essential and " luxury" road transport of goods, and in dividing the fuel ration between basic, advance supplementary and final supplementary allowances. Administrative work has been trebled and the rrrachine has been hopelessly overloaded. One of the results is a lack of proper information.

Many operators who have received supplementary allowances have not been told whether these are allocations on account, or whether they have to last for the whole 16-week periOd. Supplementary rations generally are completely inadequate and are sometimes granted in terms that make them useless. For instance, hauliers engaged exclusively on long-distance work have received supplementary rations for use only within a 60-mile radius.

And so confusion is piled upon confusion, tempers become frayed, and business is beginning to slow down to an alarming extent.

• Cabinet Consideration Frustration and exasperation have echoed in the representations made within the past week or so to the Government by the Road Haulage Association and the National Conference of Road Transport Clearing Houses.. Those organizations may take credit for having forced the qtiestion on the attention of the Cabinet.

Whether the utterances made on behalf of road transport operators have always been well advised is another matter. A lack of cordiality between the R.H.A. and the N.C.R.T.C.H. seems to have found expression in competition for publicity, in which there has been a tendency to overstate an otherwise good case and to alienate the sympathy of the Press. No reputable newspaper willingly lends itself to propaganda on behalf of any organization, and if it discovers that it has been used as a platform for wild statements it is not likely to be caught a second time.

The Government are also likely to be far more impressed by well-reasoned but restrained representations than by blood-curdling generalities. The R.H.A. and N.C.R.T.C.H. should have combined in their pleas to the Government, instead of competing with one another for attention in the Press and on the radio.

Nevertheless, the associations of goods and passenger operators have more than justified the loyalty of their members by their vigour in tackling the problem of fuel rationing. If hardship and dislocation in road transport are eventually reduced to a minimum, the credit will belong entirely to the associations for their work at national and local levels.

But that day will not come until the Minister of Transport abandons his obstinate belief that the diversion of traffic from road to rail is a simple arithmetical exercise of subtracting a quarter from unity.

During the past 30 years the transport needs of industry have changed completely, and the railways have not kept pace with them. Production and distribution have to a large extent been remodelled around the motor vehicle, and complete manufacturing systems—in some instances stretching right back to the fundamental design of a product—cannot be changed in a few days, or even weeks.

If the Minister would release to road transport three-quarters of the normal supplies of fuel, and in distributing it among operators make it clear to them that they were receiving their allocations for 16 weeks, there would be far less dislocation to industry and relatively little hardship in the road haulage industry. At present it appears that the Minister is holding back a substantial proportion of the available supplies.