Safety on the Road 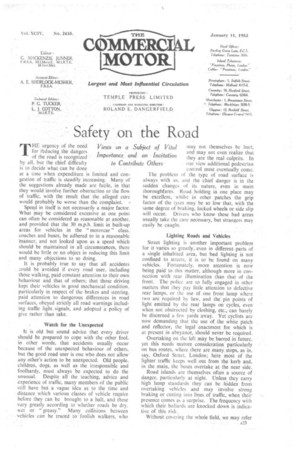 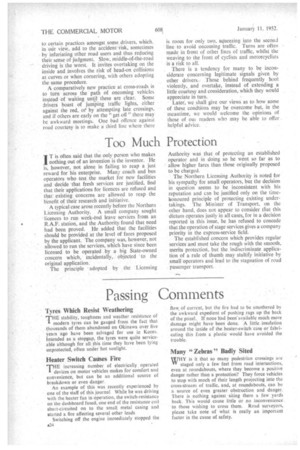 Page 25, 11th January 1952 — Safety on the Road
Close
Noticed an error?
If you've noticed an error in this article please click here to report it so we can fix it.

urgency of the need 'Views on a Subject of Vital for itducing the dangers of the road is recognized by all, but the chief difficulty to Contribute Others is to decide what can be done at a time when expenditure is limited and congestion of traffic is steadily increasing. Many of the suggestions already made are futile, in that they would involve further obstruction to the flow of traffic, with the result that the alleged en-re would probably be worse than the complaint. $ 'Speed in itself is not necessarily a major factor. What may be considered excessive at one point can often be considered as reasonable at another, and provided that the 30 m.p.h. limit in built-up areas for. vehicles in the "motorcar" class, coaches and buses, be adhered to in a reasonable Mariner, and not looked upon as a speed which should be maintained in all circumstances, there would be little or no object in reducing this limit and many objections to so doing.

It is probably true to say that all accidents could be avoided if every road user, including those walking, paid constant attention to their own behaviour and that of others; that those driving kept their vehicles in good mechanical condition, particularly in respect of the brakes and steering, paid attention to dangerous differences in road surfaces, obeyed strictly all road warnings including traffic light,signals, and adopted a policy of give rather than take.

Watch for the Unexpected Tt is old but sound advice that every driver should be prepared to cope with the other fool, in other words, that accidents usually occur because of the unexpected behaviour of others, but the good road user is one who does not allow ' any other's action to be unexpected. Old people, children, dogs, as .well as the irresponsible and foolhardy, must always be expected to do the unusual. Despite all the teaching, advice and experience of traffic, many members of the public still have but a vague idea as to the time and distance which various classes of vehicle require before they can be brought to a halt, and these vary greatly according to whether roads be dry, wet or "greasy." Many collisions between vehicles can be traced to foolish walkers, who may not themselves be hurt, and may not even 'realize that they are the real culprits. In our view additional pedestrian control must eventually come.

The problem of the type of road surface is always with us. and the chief danger is in the sudden changes of its nature, even in main thoroughfares. Road .holding in one place may be excellent, whilst in other patches the grip factor of the tyres may be so low that, with the same degree of braking, locked wheels or side slip will occur. Drivers who know these bad areas usually take the care necessary, but strangers may easily be caught.

Lighting Roads and Vehicles Street lighting is :another important problem for it .varies so greatly, even in different, parts of a single inhabited area, but bad lighting is not confined to streets, it is, to be found on many vehicles. Fortunately, more attention is now being paid to this matter, although more in connection With rear illumination than that of the front. The police are so fully engaged in other matters that they pay little attention to defective rear lamps, or the use Of one faint lamp where two are required by law, and • the pin points of light emitted by the rear lamps on cycles, even when not obstructed by clothing, etc., can barely be discerned a few yards away. Yet cyclists are noW demanding that the use of -the-white patch and reflector, the legal enactment for which is at present in abeyance, should never be required.

Overtaking on the left. may be barred in futUre, yet this needs mature consideration particularly on bus routes, where there are}nany.stops„ as in, say, Oxford Street, London; here moSt of the lighter traffic keeps well out from the kerb and, in the .main, the buses overtake at the near side.

Road islands are themselves often a source of danger, particularly at night.Unless they carry high lamp standards they can be hidden from overtaking vehicles and may involve strong braking or cutting into lines of traffic, when their presence comes as a surprise. The frequency with which their bollards are knocked down is indicative of 'this risk.

Without covering the whole field, we may refer to certain practices amongst some drivers, which, in our view, add to the accident risk, sometimes by infuriating other road users and thus reducing their sense of judgment. Slow, middle-of-the-road driving is the worst. It invites overtaking on the inside and involves the risk of head-on collisions at curves or when cornering, with others adopting the same procedure. A comparatively new practice at cross-roads is to turn across the path of oncoming vehicles instead of waiting until these are clear. Some drivers boast of jumping traffic lights, either against the red, o? by attempting late crossings, and if others are early on the "get off there may be awkward meetings. One bad offence against road courtesy is to make a third line where there is room for only two, sq‘ueezing into the second line to avoid oncoming traffic. Turns are often made in front of other lines of traffic, whilst the weaving to the front of cyclists and motorcyclists' is a risk to all.

There is a tendency for many to be inconsiderate concerning legitimate signals given by other drivers.: Those behind frequently hoot violently, and overtake, instead of extending a little courtesy and consideration, which they would appreciate in turn.

Later', we shall give our views as to how some of these condtions may be overcome but, in the meantime, we would welcome the opinions of those of out readers who may be able to offer helpful advice.