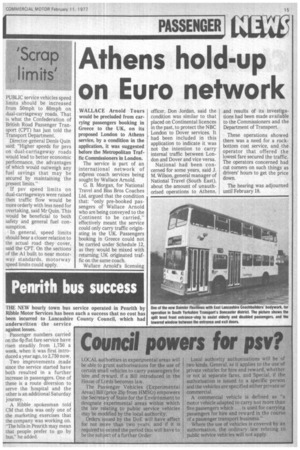 Page 17, 11th February 1977 — Athens hold-up on Euro network
Close
Noticed an error?
If you've noticed an error in this article please click here to report it so we can fix it.
Keywords : Wallace Arnold, Dover

WALLACE Arnold Tours would be precluded from carrying passengers booking in Greece to the UK, on its proposed London to Athens service, by a condition in the application, it was suggested before the Metropolitan Traffic Commissioners in London.

The service is part of an international network of egpress coach services being sought by Wallace Arnold.

G. B. Morgan, for National Travel and Biss Bros Coaches Ltd, argued that the condition that: "only pre-booked passengers of Wallace Arnold who are being conveyed to the Continent to be carried," effectively meant the service could only carry traffic originating in the UK. Passengers booking in Greece could not be carried under Schedule 12, as they would be mixed with returning UK originated traffic on the same coach.

Wallace Arnold's licensing officer, Don Jordan, said the condition was similar to that placed on Continental licences in the past, to protect the NBC London to Dover services. It had been included in this application to indicate it was not the intention to carry internal traffic between London and Dover and vice versa.

National had been concerned for some years, said J. M. Wilson, general manager of National Travel (South East), about the amount of unauthorised operations to Athens, and results of its investigations had been made available to the Commissioners and the Department of Transport.

These operations showed there was a need for a rockbottom cost service, and the operator that offered the lowest fare secured the traffic. The operators concerned had cut corners on such things as drivers' hours to get the price down.

The hearing was adjourned until February 18.