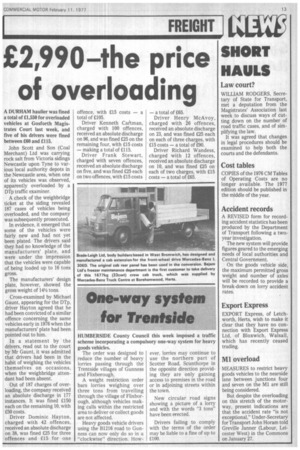 WILLIAM RODGERS, Secretary of State for Transport, met a deputation from the Magistrates' Association last week to discuss ways of cutting down on the number of road traffic cases, and of simplifying the law.

It was agreed that changes in legal procedures should be examined to help both the courts and the defendants.

COPIES of the 1976 CM Tables of Operating Costs are no longer available. The 1977 edition should be published in the middle of the year.

A REVISED form for recording accident statistics has been produced by the Department of Transport following a twoyear investigation.

The new system will provide figures geared to the emerging needs of local authorities and Central Government.

On the goods vehicle side, the maximum permitted gross weight and number of axles will be recorded to provide a break-down on lorry accident rates.

EXPORT Express, of Letchworth, Herts, wish to make it clear that they have no connection with Export Express Ltd, of Bloxwich, Walsall, which has recently ceased trading.

MEASURES to restrict heavy goods vehicles to the nearside lane between junctions four and seven on the MI are still being considered.

But despite the overloading on this stretch of the motorway, present indications are that the accident rate "is not exceptional," Under-Secretary for Transport John Horam told Greville Janner (Labour, Leicester West) in the Commons on January 27.