Prices for Ex-B.R.S. Vehicles A HINT of the prices being paid 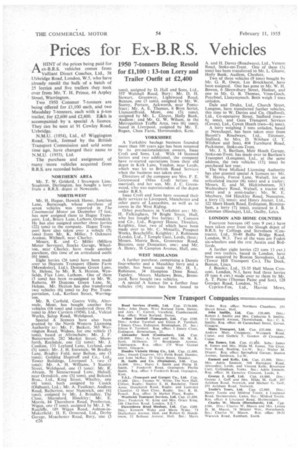 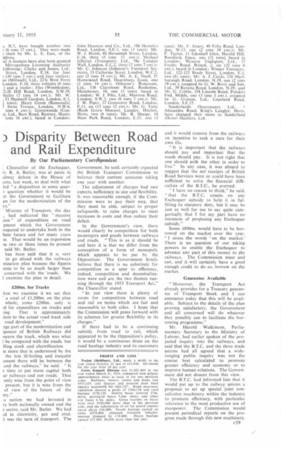 Page 66, 11th February 1955 — Prices for Ex-B.R.S. Vehicles A HINT of the prices being paid
Close
Noticed an error?
If you've noticed an error in this article please click here to report it so we can fix it.
Keywords : Land Transport, Trucks, Semi-trailer Truck, Transport, Business / Finance

for ex-B.R.S. vehicles comes from Valliant Direct Coaches, Ltd., 38 thcbridge Road, London, W.5, who have already resold the bulk of a batch of 25 lorries and five trailers they took over from Mr. T. H. Prince, 44 Arpley

N.M.U. (1954), Ltd., 65 Wiggington Road, York, formed by the British Transport Commission and sold some time ago, have changed their name to N.M.U. (1953), Ltd. The purchase and assignment, of many more vehicles acquired from B.R.S. are recorded below.

A Yorkshire haulage business founded more than 100 years ago has been resumed by its pre-nationalization owners, Isaac Croft and Sons, Ltd. With 14 licensed lorries and two additional, the company have re-started operations from their old depot in Kirk Lane, Yeadon, near Leeds, which was let to British Road Services when the business was taken over. • Directors of the company are Mrs. F. E. Greenwood (Miss Croft before she married), and her son, Mr. J. C. Greenwood, who was superintendent of the depot under B.R.S.

Isaac Croft and Sons have resumed their daily services to Liverpool, Manchester and other parts of Lancashire, as well as to towns in the West Riding. Other purchasers in Yorkshire arc: Mr. H. Falkingham, 59 Bright Street. Hull, who has bought Jive lorries; T. Conyers and Co , Ltd., Regency House, Thwaites, Keighley, four, two of which have been made over to Mr. C. Metcalfe, Prospect Works, Beachcliffe, Keighley; J. Robinson (Leed0. Ltd., 7 Temple Gate, Leeds, three; Messrs. Morris Bros., Grosvenor Road, Bircotes, near Doncaster, one; and Mr. A. Henry, 36 Campion Avenue, Hull, one.

WEST MIDLANDS A further purchase, comprising a Dennis four-wheeler and a Maudslay lorry and, a trailer, has been made by Mr. H. L. Robinson. 34 Hampton Dene Road. Tupsley. Messrs. Mathews Bros., Bromyard, have bought two vehicles.

A special A licence for a further four vehicles (l41 tons) has been issued to A. and H. Davey (Roadways), Ltd.. Vernon Road, Stoke-on-Trent. One of these (3) tons) has been transferred to Mr. L. Glcave, Holly Bank, Audlem, Cheshire.

LONDON AND HOME COUNTIES Fourteen boxvans (45 tons 9 cwt.) have been taken over from the Slough depot of B.R.S. by Collings and Stevenson (Contracts), Ltd., 30-40 Bollo Bridge Road, London, W.3. Two of the vans are Foden six-wheelers and the rest Austin and Bedfords.