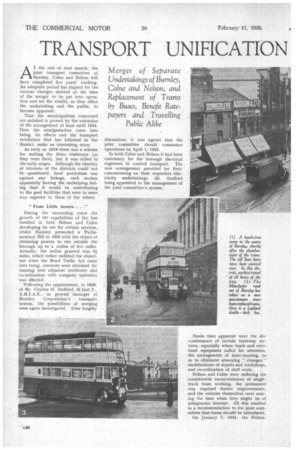 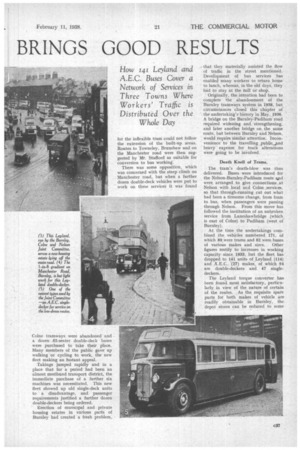 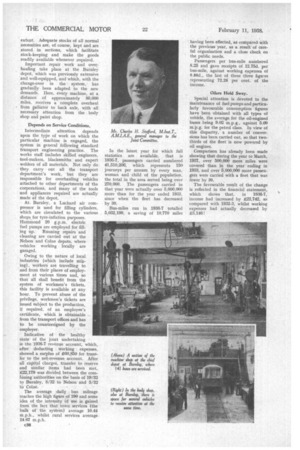 AT the end of next month, the joint transport committee of Btu-nley, Cohn and Nelson will have completed five years' working. An adequate period has elapsed for the various changes mooted at the time of the merger to be put into operation and for the results, as they affect the undertaking and the public, to become apparent.

That the municipalities concerned are satisfied is proved by the extension • of the arrangement at least until 1944. How the amalgamation came into . being, its effects and the transport revolution that has followed in the ' 'district, make an interesting story.

As early as 1919 there was a scheme for uniting the three tramways (as they were then), but it was stifled in the early stages. Although the identity of interests of the districts could not be questioned, local • patriotism was against any linkage, each section apparently having the underlying feeling that it would be contributing to the pool facilities that were in some way superior to those of the others.

During the succeeding years the growth of the capabilities of the bus resulted in both Nelson and Colne developing its use for certain services, whilst Burnley promoted a Parliamentary Bill in 1925 with the object of obtaining powers to run outside the borough up to a radius of five miles. Actually, the radius granted was 31 miles, which rather nullified the object, but when the Road Traffic Act came into being, consents were obtained for running into adjacent territories and co-ordination with company operators was effected.

Following the appointment, in 1930, of Mr. Charles H. Stafford, M.Inst.T., A.M.I.A.E., as general manager of Burnley Corporation's transport system, the possibilities of merging were again investigated. After lengthy diScussions, it was agreed that the joint committee should commence operations on April 1, '1933.

In both Colne and Nelson it had been customary for the borough electrical engineers to control transport. The new arrangement provided for their concentrating on their respective electricity undertakings, Mr. Stafford being appointed to the management of the joint committee's system. ,Needs then apparent were the discontinuance of certain tramway services, especially where track and overhead equipment called for attention, the arrangement of inter-running, so as to eliminate annoying "changes," modifications of depots and workshops, and co-ordination of staff work. • Nelson and Colne were suffering the considerable inconveniences of singletrack tram working, the permanent way required drastic improvements, and the vehicles themselves were nearing the time when they might be of antiquarian interest. All this resulted in a recommendation to the joint committee that buses should be introduced.

On January 7, 1934, the Nelson Colne tramways were abandoned and a dozen 52-seater double-deck buses were purchased to take their place. Many members of the public gave up walking or cycling to work, the new fleet making an instant appeal.

Takings jumped rapidly and in a place that for a period had been an almost moribund transport district, the immediate purchase of a further six machines was necessitated. This new fleet showed up old single-deck units to a disadvantage, and passenger requirements justified a further dozen double-deckers being ordered.

Erection of municipal and private housing estates in various parts of Burnley had created a fresh problem, for the inflexible tram could not follow the extension of the built-up areas. Routes to Towneley, Brunshaw and on the Manchester road were then suggested by Mr. Stafford as suitable for conversion to bus working.

There was some opposition, which was concerned with the steep climb on Manchester road, but when a further dozen double-deck vehicles were put to work on these services it was found that they materially assisted the flow of traffic in the street mentioned. Deveropment of bus services has enabled many workers to return home to lunch, whereas, in the Old days, they had to stay at the Mill or shop.

Originally, the intention had been to complete the abandonment of the Burnley tramways system in 1938, but circumstances dosed this chapter of the undertaking's history in May, 1936. A bridge on the Burnley-Pa.diham road required widening and strengthening, and later another bridge on the same route, but between Burnley and Nelson, would require similar attention. Inconvenience to the travelling public_And heavy expense for track alterations were going to be involved.

The tram's death-blow was thus delivered. Buses were introduced for the Nelson-Burnley-Padiham route And • were arranged to give connections at Nelson with local and Colne _services, so that through-running cut out what had been a tiresome change, from tram to bus, when passengers were passing through Nelson. From this move has followed the institution of an unbroken service from Laneshawbridge (which. is east of Colne) to Padiham (west of Bu r nley)

At the time the undertakings combined the vehicles numbered 171, of which 89 were trams and 82 were buses of various makes and sizes. Other figures testify to increases in working capacity since 1933, but the fleet has dropped to 141 units of Leyland (114) and A.E.C. (27) makes, of which 94 are double-deckers and 47 singledeckers.

The Leyland torque converter has been found most satisfactory, particularly in view of the nature of certain of the routes. As the requisite spare parts for both makes of vehicle are readily obtainable in Burnley, the depot stores can be reduced to some extent. Adequate stocks of all normal necessities are, of course, kept and are stored in sections, which facilitate stock-keeping and make the goods readily available whenever required.

Important repair work and overhauling take place at the Burnley depot, which was previously extensive and well-equipped, and which, with the change-over in the system, has gradually been adapted to the new demands. Here, every machine, at a distance of approximately 80,000 miles, receives a complete overhaul from radiator to back axle, with all necessary attention from the body shop and paint shop.

Intermediate attention depends upon the type of work on which the particular machine is engaged, the system in general following standard transport engineering practice. The works staff includes skilled engineers, tool-makers, blacksmiths and expert welders of all materials. Not only do they carry out all the transport department's work, but they are responsible for overhauling vehicles attached to other departments of the corporations, and many of the tools and appliances required are actually made at the depot.

At Burnley, a Luchard air compressor is used for filling cylinders, which are circulated to the various shops for tyre-inflation purposes. Hammond 20 g.p.m. electric fuel pumps are employed for filling up. Running repairs and cleaning are carried out at the Nelson and Colne depots, where vehicles working locally are garaged.

Owingto the nature of local industries (which include mining), workers are travelling to and from their places of employment at various times and, so that all shall benefit from the system of workmen's tickets, this facility is available at any hour. To prevent abuse of the privilege, workmen's tickets are issued subject to the production, if required, of an employee's certificate, which is obtainable from the transport offices and has to be countersigned by the employer.

Indicative of the healthy state of the joint undertaking is the 1936-7 revenue account, which, after deducting working expenses, showed a surplus of 260,650 for transfer to the net-revenue account. After all capital charges, transfer to reserve and similar items had been met, 222,179 was divided between the combining authorities on the basis of 19/32 to Burnley, 8/32 to Nelson and 5/39 to Collie.

The average daily bus mileage reaches the high figure of 190 and some idea of the intensity of use is gained from the fact that town services (the bulk of the system) average 10.44 m.p.h., whilst rural services average 14.67 m.p.h. In the latest year for which full statistics are available, that is 1936-7, passengers carried numbered 41,510,200, which represents 150 journeys per annum by every man, woman and child of the population, the total in the area served being over 270,000. The passengers carried in that year were actually over 5,000,000 more than for the year ended 1933, since when the fleet has decreased by 30.

Bus-miles run in 1936-7 totalled 5,032,199, a saving of 10,770 miles having been effected, as compared with the previous year, as a result of careful organization and a close check on the public needs.

Passengers per bus-mile numbered 8.25 and gave receipts of 12.75d. per bus-mile, against working expenses of 9.86d., the last of these three figures representing 72.26 per cent, of the income.

Special attention is devoted to the maintenance of fuel pumps and particularly favourable consumption figures have been obtained with all types of vehicle, the average for the oil-engined buses being 9.02 m.p.g., against 5.09 m.p.g. for the petrol class. In view of this disparity, a number of conversions has been carried out, so that twothirds of the fleet is now powered by oil engines.

The favourable result of the change is reflected in the financial statement, which shows that, in 1936-7, income had increased by £22,742, as compared with 1932-3, whilst working expenses had actually decreased by 23,146!