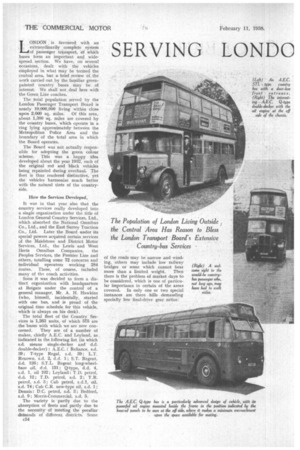 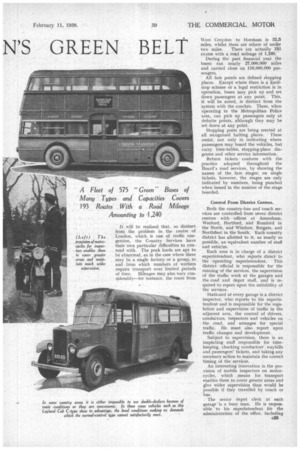 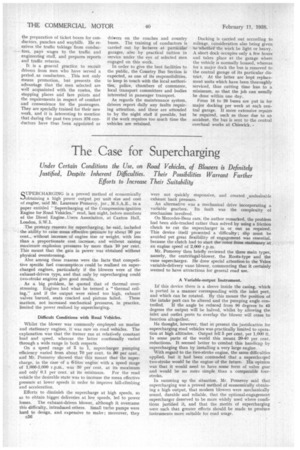 LONDON . is favoured with an , extraordinarily complete system _of passenger transport, of which buses form an important and widespread. section. We have, on several occasions, dealt with the vehicles employed in what may be termed the central area, but a brief review of the work carried out by the familiar greenpainted country buses May he of interest We shall not deal here with the Green, Line coaches.

The total population served by the London Passenger Transport Board is nearly 10,000,000 living within close upon 2,000 sq. miles. Of this area, about 1,300 sq. miles are covered by the country buses, which operate in a ring lying approximately between the Metropolitan Police Area and the boundary of the total area in which the Board operates.

The Board was not actually responsible for adopting the green colour scheme. This was a happy idea developed about the year 1932, each of the original red and black vehicles being repainted during overhaul. The fleet is thus rendered distinctive, yet the vehicles harmonize much better with the natural tints of the countryside.

How the Services Developed.

It was in that year also that the country services really developed into a single organization under the title of London General Country Services, Ltd., which absorbed the National Omnibus Co., Ltd., and the East Surrey Traction Co., Ltd. Later the Board under its special powers acquired certain services .af the Maidstone and District Motor Services, Ltd., the Lewis and West _Hefts Omnibus Companies, the Peoples Services, the Premier Line and others, totalling some 72 concerns and individual operators working 284 routes. These, of course, included many of th-s coach activities.

Soon it was decided to form a distinct organization with headquarters at Reigate under the control of a general manager, Mr. A. H. Hawkins (who, himself, incidentally, started with one bus, and is proud of the original time schedule for this vehicle, which is always on his desk).

The variety is partly due to the absorption of fleets and partly due to the necessity of meeting the peculiar demands of different districts. Some c54 of the roads may be narrow and winding, others may include low railway bridges or some which cannot bear more than a limited weight. Then there is the problem of market days to be considered, which is one of particular importance in certain of the areas covered. In only one or two special instances are there hills demanding specially low final-drive gear ratios: It will be realized that, as distinct from the problem in the centre of London, which is one of traffic congestion, the Country Services have their own particular difficulties to contend with. The peak loads are apt to be abnormal, as in the case where there may be a single factory or a group, to and • from which numbers of workers require transport over limited periods of time. Mileages may also vary considerably—for instance, the route from West Croydon to Horsham is 32.,5 miles, whilst there are others of under two miles. There are actually 193 roates with a road mileage of 1,240.

All fare points are defined stopping places. Except where there is a fixedstop scheme or a legal restriction is in operation, buses may pick up and set down passengers at any point. This, it will be noted, .is distinct from the system with the coaches. These, when operating in the Metropolitan Police area, can pick up passengers only at definite points, although they may be set down at any point.

Stopping posts are being erected at all recognized halting places. These assist, not only in indicating where passengers may board the vehicles, but carry time-tables, stopping-place diagrams and other service information.

Return tickets conform with the practice adopted throughout the Board's road services, by showing the names of the fare stages; on single tickets, however, the stages are only indicated by numbers, being punched when issued in the number of the stage boarded.

Both the country-bus and coach services are controlled from seven district centres with offices at Amersham, Watford, Heilford, and Romford in the North, and Windsor, Reigate, and Northfleet in the South, Each country district has allotted to it, as nearly as possible, an equivalent number of staff and vehicles.

Faeh area is in charge of a district superintendent, who reports direct to the operating superintendent. This district official is responsible for the running of the services, the supervision of the traffic work at the garages and the road and depot staff, and is required to report upon the suitability of the services.

Stationed at every garage is a district inspector, who reports to his superintendent and is responsible for the regulation and supervision of traffic in the adjacent area, the control of drivers, conductors, inspectors and vehicles on the road, and arranges for special traffic. He must also report upon traffic changes and development.

Subject to supervision, there is an inspecting staff responsible for timekeeping, checking conductors' waybills and passengers' tickets, and taking any necessary action to maintain the correct timing of the services.

An interesting innovation is the provision of mobile inspectors on motorcycles, which means for transport enables them to cover greater areas and give wider supervision than would be possible if they travelled by coach or bus.

The senior depot clerk at each garage is a busy man. He is responsible ' to his superintendent fdr the administration of the office. including

the preparation of ticket boxes for conductors, punches and waybills. He receives the traffic takings from conductors, pays wages to the traffic and engineering staff, and prepares reports and traffic returns.

It is a general practice to recruit drivers from men who have served a period, as conductors. This not only means promotion, but presents the advantage that the men selected are well acquainted with the routes, the stopping places arid fare points and the requirements in respect of comfort and convenience for the passengers. They are specially trained for their new work, and it is interesting to mention that during the past two years 376 conductors have thus been appointed as driwers on the coaches and country buses. The training of conductors is carried out by lectures at particular garages, also by practical tuition in service under the eye of selected men engaged on this work.

In order to give the best facilities to the public, the Country Bus Section is expected, as one of its responsibilities, to keep in touch with the local authorities, police, chambers of commerce, local transport committees and bodies interested in passenger transport.

As regards the maintenance system, drivers report daily any faults requiring attention, and these are attended to by the night staff if possible, hut if the work requires too much time the vehicles are retained.

Docking is carried out according to mileage, consideration also being given to whether the work be light or heavy. A short dock occupies only a few hours and takes place at the garage where the vehicle is normally housed, whereas for a major dock the bus is removed to the central garage of its particular district. At the latter are kept replacement units which have been thoroughly serviced, thus cutting time loss to a minimum, so that the job can usually be done within one day.

From 16 to 20 buses are put in for major docking per week at each central garage. If more extensive repairs be required, such as those due to an accident, the bus is sent to the central overhaul works at Chiswick.,