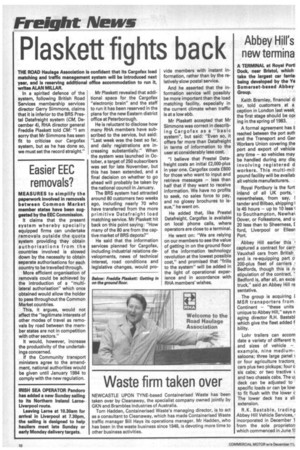 Page 8, 11th December 1982 — Abbey Hill's new termina
Close
Noticed an error?
If you've noticed an error in this article please click here to report it so we can fix it.
Keywords : Bastable

A TERMINAL at Royal Port! Dock, near Bristol, which take the largest car fords being developed by the Ye Somerset-based Abbey Group.

Keith Bramley, financial di tor, told customers at a ception in London last week the first stage should be opi ing in the spring of 1983.

A formal agreement has t reached between the port auth and the Transport and Ger Workers Union covering the port and export of vehicle any time — so vehicles may be handled during any disi involving registered d workers. This multi-mil pound facility will be availab all vehicle manufacturers.

Royal Portbury is the furt inland of all UK ports, nevertheless, from say, tender and Bilbao, shipping 1 is 45 hours — up to 10 less 1 to Southampton, Newha■ Dover, or Folkestone, and u 20 less than to Sheerness, E ford, Liverpool or Ellesn Port,

Abbey Hill earlier this captured a contract for carr Vauxhall cars from British and is re-equipping part o. 200-plus fleet of carriers Bedfords, though this is n1 stipulation of the contract. I' Bedford is, after all, an exce truck," said an Abbey Hill re sentative.

Lohr trailers can accom date a variety of different t) and sizes of vehicle — example, nine mediumsaloons; three large panel 1 or four agriculture tractors, cars plus two pickups; four c sis cabs; or two tractive and two chassis cabs. The ui deck can be adjusted to specific loads or can be low to fit flush with the lower c The lower deck has a sli extension.