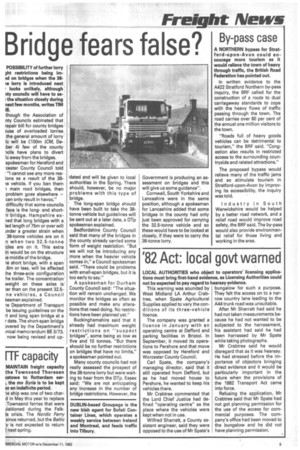 Page 7, 11th December 1982 — By-pass case
Close
Noticed an error?
If you've noticed an error in this article please click here to report it so we can fix it.

A NORTHERN bypass for Stratford-upon-Avon could encourage more tourism as it would relieve the town of heavy through traffic, the British Road Federation has pointed out.

In written evidence to the A422 Stratford Northern by-pass inquiry, the BRF called for the construction of a route to dual carriageway standards to cope with the heavy flows of traffic passing through the town. The road carries over 80 per cent of the annual one million visitors to the town.

"Roads full of heavy goods vehicles can be detrimental to tourism," the BRF said. "Congestion also results in restricted access to the surrounding countryside and related attractions."

The proposed bypass would relieve many of the traffic jams and so stimulate tourism in Stratford-upon-Avon by improving its accessibility, the inquiry was told.

Industry in South Warwickshire would be helped by a better road network, and a relief road would improve road safety, the BRF said. The by-pass would also provide environmental relief for those living and working in the area.