A Licence for Trailer Upheld .on Appeal 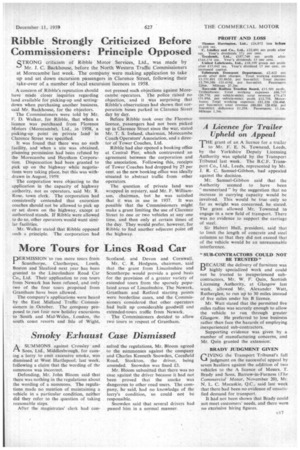 Page 53, 11th December 1959 — A Licence for Trailer Upheld .on Appeal
Close
Noticed an error?
If you've noticed an error in this article please click here to report it so we can fix it.
Keywords : Business / Finance

THE grant of an A licence for a trailer to Mr. F. E. N. Townend, Leeds, by the Yorkshire Deputy Licensing Authority was upheld by the Transport Tribunal last week. The B.C.F. Transport Co., Ltd., Leeds, represented by Mr. I. R. C. Samuel-Gibbon, had appealed against the decision.

Mr. Samuel-Gibbon said that the Authority • seemed to have been mesmerized" by the suggestion that no increase in carrying capacity would be involved. This would be true -only so far as weight was concerned, he stated. The grant allowed Mr. Townencl to engage in a new field of transport. There was no evidence to support the carriage of steel.

Sir Hubert Hull, president, said that to limit the length of concrete and steel columns so that they did not exceed that of the vehicle would be an unreasonable interference.

"SUB-CONTRACTORS COULD NOT BE TRUSTED" no ECAUSE the delivery of furniture was L) highly specialized work and could not be trusted to inexperienced subcontractors, Mr. W. F. Quin, Scottish Licensing Authority, at Glasgow last week, allowed Mr. Alexander Watt, Rutherglen, to run up to 30 miles instead of five miles under his B licence.

Mr. Watt stated that the permitted five miles radius was scarcely enough to allow the vehicle to run through greater Glasgow. He preferred to lose business rather than face the hazards of employing inexperienced sub-contractors.

Supporting evidence was given by a number of manufacturing concerns, and Mr. Quin granted the extension: BRADY JUDGMENT GIVEN (-JIVING the Transport Tribunal's full judgment on the successful appeal by seven hauliers against the addition of two vehicles to the A licence Of Messrs. T. Brady and Sons, Barrow-in-Furness (The Commercial Motor, November 20), Mr. N. L. C. Macaskie, Q.C., said last week that there had been no evidence of unsatisfied demand for transport.

It had not been shown that Brady could not meet customers' needs, and there were no exedssive hiring figures.