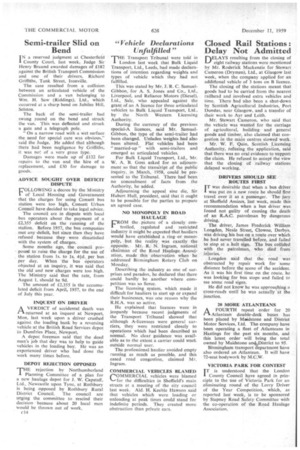 "THE Transport Tribunal were told in I London last week that Bulk Liquid Transport, Ltd., Leeds, had made declarations of intention regarding weights and types of vehicle which they had not fulfilled.

This was stated by Mr. J. R. C. SamuelGibbon. for A. S. Jones and Co., Ltd., Liverpool, and Reliance Motors (Diesel). Ltd., Sale, who appealed against the grant of an A licence for three articulated vehicles to Bulk Liquid Transport, Ltd., by the North Western Licensing Authority.

During the currency of the previous special-A licences, said Mr. SamuelGibbon, the type of the semi-trailer had been changed. Unladen Weights had also been altered. Flat vehicles had been " married-up " with semi-trailers and emerged as articulated vehicles.

For Bulk Liquid Transport, Ltd., Mr. W. A. B. Goss asked for an adjournment so that the transaript of the public inquiry, in March, 1958, could be presented to the Tribunal. There had' been no concealment of facts from the Authority, he added.

Adjourning the appeal sine die, Sir Hubert Hull, president, said that it ought to be possible for the parties to prepare an agreed case.

NO MONOPOLY IN ROAD HAULAGE

FROM the . picture of a closely controlled, regulated and restricted industry it might be expected that hauliers would have established a ring or monopoly, but the reality was exactly the opposite. Mr. R. N. Ingram, national chairman of the Road Haulage, Association, made this observation when he addressed Birmingham Rotary Club on Monday.

Describing the industry as one of surprises and paradox, he declared that there could hardly be another where competition was so fierce.

The licensing system, which made it difficult for hauliers to start up or expand their businesses, was one reason why the R.H.A. was so active.

He explained that licences were in jeopardy because recent judgments of the Transport Tribunal showed that although A-licensees were general carriers, they were restricted closely to operations which had been described as normal. No clear guidance was available as to the extent a carrier could work outside normal user.

The professional haulier avoided empty running as much as possible, and this eased road congestion, claimed Mr. Ingram.

COMMERC1AL vehicles were blamed gfor the difficulties in Sheffield's main streets at a meeting of the city council last week. Aid. H. Keeble Hawson said that vehicles which were loading or unloading at peak times could stand for indefinite periods. They created more obstruction than private cars.