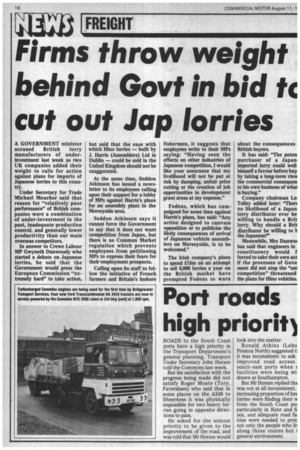 Page 18, 11th August 1978 — Port roads high prioriti
Close
Noticed an error?
If you've noticed an error in this article please click here to report it so we can fix it.
Keywords : Counties Of England, Kent, Geography Of England, Swale, Transport In Kent, Wealden, Horam, Roads In England, Sheerness, A249 Road, Faversham, Politics

.ROADS to the South Coast ports have a high priority in the Transport Department's general planning, Transport Under Secretary John Horam told the Commons last week.

But his satisfaction with the progress being made did not satisfy Roger Moate (Tory, Faversham) who said that in some places on the A249 to Sheerness it was physically impossible for two heavy lorries going in opposite directions to pass.

He asked for the utmost priority to be given to the improvement of the road, and was told that Mr Horam would look into the matter.

But Mr Horam replied tha was not at all inconsistent. increasing proportion of he lorries were finding their m from the South Coast poi particularly in Kent and S sex, and adequate road fa, ities were needed to prot. not only the people who It% along those routes but t general environment.