Opposition to Applications for Higher Fares 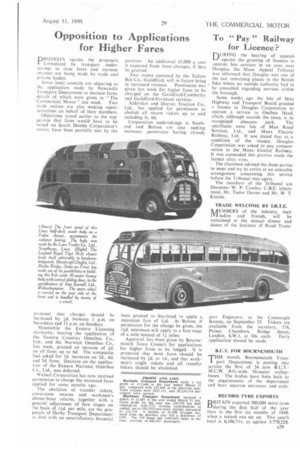 Page 31, 11th August 1950 — Opposition to Applications for Higher Fares
Close
Noticed an error?
If you've noticed an error in this article please click here to report it so we can fix it.

Seven local councils are objecting to the application made by Newcastle Transport Department to increase fares, details of which were given in "The Commercial Motor" last week. Two trade unions are also making representations on behalf of their members.

Objections raised earlier to the suguestion that fares would have to be raked on South Shields Corporation's routes, have been partially met by the proposal that charges should be increased by id. between 1 p.m. on Saturdays and 11 p.m. on Sundays.

Walsall Corporation has now received permission to charge the increased fares applied for some months ago.

The abolition of transfer tickets, cross-town returns and workmen's dinner-hour returns, together with a general adjustment of fare stages on the basis of lid. per mile, are the proposals of Derby Transport Department to deal with an unsatisfactory financial position. An additional £5,000 a year is expected from these changes, if they. be granted.

Two routes operated by the Yellow Bus Co., Guildford, will in future bring in increased revenue. Permission was given last week for higher fares to be charged on the Guildford-Camberley and Guildford-Farnham services.

Aldershot and District Traction Co., Ltd., has applied for permission to abolish all return tickets up to arid including Is. 6d.

Corporation undertakings at Southend and Bolton are also seeking increases, permission having already been granted to Southend to apply a, minimum fare of lid. At Bolton, if permission for the change be given, the lid. minimum will apply to a fare stage of a mile instead of l miles: Approval has been given by Bournemouth Town Council for applications for higher fares to be lodged. It is proposed that most fares -should be increased by id. or Id., and that work; men's single tickets and all transfer tickets should be abolished.