Plaxton glides to Is this the lorry victory at Blackpool bashers' Bible. . . 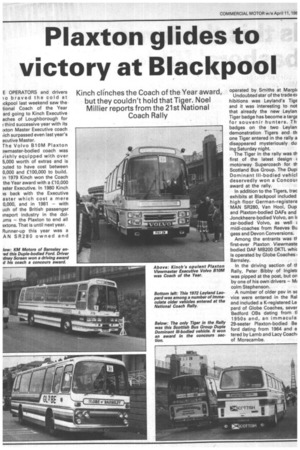 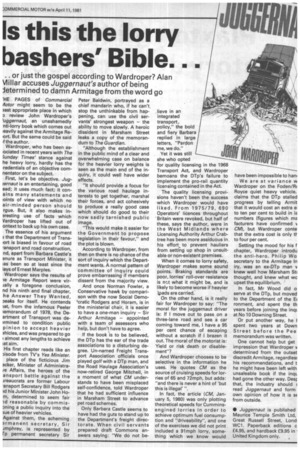 Page 64, 11th April 1981 — Plaxton glides to Is this the lorry victory at Blackpool bashers' Bible. . .
Close
Noticed an error?
If you've noticed an error in this article please click here to report it so we can fix it.
Keywords : Plaxton, Scarborough, North Yorkshire, Buses

operated by Smiths at Marp14 Undoubted star of the tradee) hibitions was Leyland's TigE and it was interesting to not that already the new Leylan Tiger badge has become a targE for souvenir hunters. Th badges on the two Leylan demonstration Tigers and th one Tiger entered in the rally a disappeared mysteriously du ing Saturday night.

The Tiger in the rally was th first of the latest design c motorway Supercoach for th Scotland Bus Group. The Dupl Dominant III-bodied vehici deservedly won a Concour award at the rally.

In the driving section of if Rally, Peter Bibby of Ingletc was pipped at the post, but on by one of his own drivers — calm Stephenson.

A number of older psv in SE vice were entered in the Ral and included a K-registered Le pard of Globe Coaches, sever Bedford OBs dating from tl

19505 and, an immacula 29-seater Plaxton-bodied Be ford dating from 1964 and e tered by Lamb and Lacy Coach' of Morecambe.

HE PAGES of Commercial &tor might seem to be the 3ast appropriate place in which D review John Wardroper's 'uggernaut, an unashamedly nti-lorry book which comes out eavily against the Armitage Report. But the same could be said Pf the author.

Wardroper, who has been asiociated in recent years with The iunday Times' stance against he heavy lorry, hardly has the :redentials of an objective cornnentator on the subject.

First, let's be objective. Jugwmaut is an entertaining, good ead; it uses much fact; it conains many statements and loints of view with which no air-minded person should rgue. But, it also makes inresting use of facts which Vardroper has lifted out of ontext to back up his own case. The essence of his argument 3 that the Department of Transport is biased in favour of road .ansport and road construction, rid, apart from Barbara Castle's enure as Transport Minister, it as been so at least since the lays of Ernest Marples.

Wardroper says the results of le Armitage Report were virJelly a foregone conclusion, nd his ninth and final chapter, he Answer They Wanted, peaks for itself. He contends la, from the infamous Peeler iemorandum of 1978, the Deartment of Transport was deirmined to condition public pinion to accept heavier 3hicles, and was prepared to go almost any lengths to achieve at aim.

His first chapter reads like an Asode from TV's Yes Minister.

place of the ficticious Jim acker, Minister of Administra/e Affairs, the heroes of the ansport battle against the Ireaucrats are former Labour :ansport Secretary Bill Rodgers id his Junior Minister John Horn, determined to seem fair id reasonable by commisDning a public inquiry into the 3ue of heavier vehicles.

Against them, the scheming 3rmanent secretary, Sir Jmphrey, is represented by rp permanent secretary Sir Peter Baldwin, portrayed as a chief mandarin who, if he can't, stop the unthinkable from happening, can use the civil servants' strongest weapon — the ability to move slowly. A heroic dissident in Marsham Street leaks a copy of the memorandum to The Guardian.

"Although the establishment in the public mind of a clear and overwhelming case on balance for the heavier lorry weights is seen as the main end of the inquiry, it could well have wider effects.

"It should provide a focus for the various road haulage interests to get together, marshal their forces, and act cohesively to produce a really good case which should do good to their now sadly tarnished public image.

"This would make it easier for the Government to propose legislation in their favour," and the plot is blown.

According to Wardroper, from then on there is no chance of the sort of inquiry which the Department wants. A normal pattern of committee of inquiry could prove embarrassing if members dissent from the majority view.

And once Norman Fowler, a Conservative hawk by comparison with the now Social Demo4cratic Rodgers and Horam, is in the ministerial chair, it is easier to have a one-man inquiry — Sir Arthur Armitage — appointed with a team of assessors who help, but don't have to agree.

If the book is to be believed, the DTp has the ear of the trade associations to a disturbing degree. Un-named Freight Transport Association officials once played golf with a DTp man, and the Road Haulage Association's now-retired George Mitchell, in a moment of what CM understands to have been misplaced self-confidence, told Wardroper that he had sufficient influence in Marsham Street to advance pet road schemes.

torate. When civil servants prepared draft Commons answers saying: "We do not be

lieve in an integrated transport, policy," the bold and fiery Barbara replied in large letters, "Pardon me, we do."

Yet it was still she who opted for quality licensing in the 1968 Transport Act, and Wardroper bemoans the DTp's failure to implement the pro-rail quantity licensing contained in the Act.

The quality licensing provisions haven't been the success which Wardroper would have liked. From 1975/79, 690 Operators' licences throughout 'Britain were revoked, but half of these, says the author, were in the West Midlands where Licensing Authority Arthur Crabtree has been more assiduous in. his effort_ to prevent hauliers from setting up shop in unsuitable or non-existent premises.

When it comes to lorry safety, Wardroper makes some sound points. Braking standards are poor, lorries' roll-over resistance is rvIt what it might be, and is likely to become worse if heavier (pads are carried.

On the other hand, is it really fair for Wardroper to say: "The moral for the juggernaut driver is: If I move out to pass on a three-lane road and see a car coming toward me, I have a 95 per cent chance of escaping without a scratch if I brazen it out. The moral of the motorist is: Yield or risk death or disablement"?

And Wardroper chooses to be selective in the information he uses. He quotes CM as the source of cruising speeds for lorries of 65 and 72mph, but adds: "and there is never a hint of 'but this is illegal' ".

In fact, the article (CM, January 5, 1980) was only plotting theoretical speeds for Cumminsengined lorries in order to achieve optimum fuel consumption and "driveability", and one of the exercises we did not print included a 91mph lorry, something which we know would

have been impossible to ham We are at variance w Wardroper on the Foden/Rc Royce quiet heavy vehicle. claims that the DTp stalled progress by telling Armit that it would cost an extra ep to ten per cent to build in la numbers (figures which ma facturers have confirmed v CM), but Wardroper conte that the extra cost is only if to four per cent.

Setting the mood for his f chapter, Wardroper introdu the anti-hero. Philip Wo secretary to the Armitage In iry, was an ex-DTp man v knew well how Marsham Sti thought, and knew what wc upset the equilibrium.

In fact, Mr Wood did o serve at the DTp, but moved to the Department of the Ei ronment, and spent the th years before joining the inqt at No 10 Downing Street.

Or put another way, he spent two years at Down Street before the Pee memorandum was written.

One cannot help but get impression that Wardroper v determined from the outset discredit Armitage, regardlesi his recommendations, and t he might have been left with unsaleable book if the inqi. had gone the other way. Desf that, the industry should f. read Juggernaut and form own opinion of how it is SE from outside.