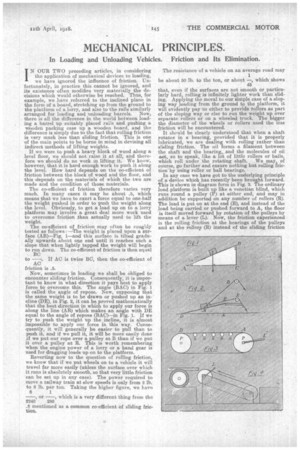 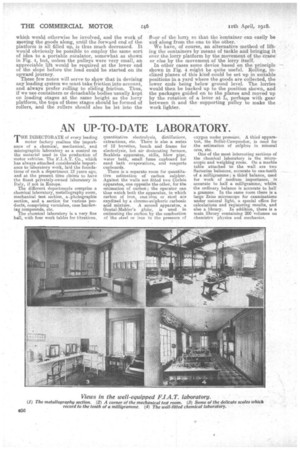 Page 13, 11th April 1918 — MECHANICAL PRINCIPLES.
Close
Noticed an error?
If you've noticed an error in this article please click here to report it so we can fix it.

In Loading and Unloading Vehicles. Friction and Its Elimination.

IN OUR TWO preceding articles, in considering the application of mechanical devices to loading, we have ignored the influence of friction. Unfortunately, in practice this cannot be ignored, and its existence often modifies very materially the decisions which would otherwise be reached. Thus, for example, we have referred to the inclined plane in the form of a board, stretching up from the ground to the platform of a lorry, and also to the rails similarly arranged for loading and -unloading barrels. Now, there is all the difference in the world between. loading a barrel up suitably placed rails and pushing a wooden packing case up a wooden board, and the difference is simply due to the fact that rolling friction is very much less than sliding friction.. This is one of the main points to be borne in mind in devising all indirect methods of lifting weights.

If we were to push a heavy block of wood along a level floor, we should not raise it at all, and therefore we should do no work in lifting it. We know, however, that it is hard enough work to push it along the level. How hard depends on the co-efficient of friction between the block of wood and the floor, and this depends on the materials of which the two are made and the condition of those_ materials.

The co-efficient of friction. therefore varies very much. In many cases it may be about .5, which means that We have to exert a force equal to one-half the weight pushed in order to push the weight along the level. Obviously, to get a load up on to a lorry platform may involve a great deal more work used to overcome friction than actually used to lift the weight.

Now, sometimes in loading we shall be obliged to encounter sliding friction. Consequently., it is impor tant to know in what direction•it pays best to apply force to overcame this. The angle (BAC) in Fig. 1 is called the angle of repose. Now, supposing that the same weight is to be drawn or pushed up an in cline (DE), in Fig. 2, it can be proved mathematically that the beat direction in which to apply our force is along the line (AB) which makes an angle. with DE equal to the angle of repose (BAC)—in Fig. 1. If we try to push the weight up the incline, it is almost impossible to apply our force in this way. Conse

quently, it -will generally be easier to pull than to push it, and if we pull it, it will be more easily done

Reverting now to the question of rolling friction, we know that if we put wheels on to a vehicle it will travel far more easily (unless the surface aver which it runs is absolutely smooth, so that very little friction can be set up in any case). The power required to move a railway train at slow speeds is only from 2 lb. to 8 lb. per ton. Taking the higher figure, we have 8 1 , or —, which is a very different thing from the 2240 280 .5 mentioned as a common co-efficient of sliding friction. The resistance of a vehicle on an average road may be about 50 lb. to the ton, or about —, which shows 45

that, even if the surfaces are not smooth or particularly hard, rolling is infinitely lighter work than sliding. Applying the moral to our simple case of a sloping way leading from the ground to the platform, it will evidently pay -as either to provide rollers as part of the sloping way or else to run the weight up over separate rollers or on a wheeled truck. The bigger the diameter of the wheels or rollers used the less friction will be encountered. It should be clearly -understood that when a shaft rotates in a bearing, provided that it is properly lubricated, we are dealing with rolling rather than sliding friction. The oil forms a filament between the shaft and the bearing,. and the molecules of oil act, so to speak, like a lot of little rollers or balls, which roll under the rotating shaft. We may, of course, go further and ensure nothing but rolling friction'by using roller or ball bearings. In any ease we have got to the underlying principle of a device which has recently been brought forward. This is shown in diagram form in Fig. 3The ordinary load platform is built .tzp like a venetian blind, which runs round a pulley (P) at either end, and may in addition be supported on any number of rollers (R). The load is put on at the end (B), and instead of the load being carried or pushed forward to A, the floor is itself moved forward by rotation of the pulleys by means of a, lever (L). NOW, the friction experienced is the rolling friction at the bearings of the pulleys and at the rollers (R) instead of the sliding friction

which would otherwise be involved, and the work of moving the goods along, until the forward end of the platform is all filled up, is thus much decreased. It would obviously be possible to employ the same sort of idea to a. portable esealator, somewhat as shown in Fig. 4, but, unless the pulleys were very small, an appreciable, lift would he required at the lower end of the slope before the load could be started on its upward journey.

These few notes will serve to show that in devising any loading system we must take friction into account, and always prefer rolling to sliding friction. Thus, if we use containers or detachable bodies usually kept on loading stages at the same height as the lorry platform, the tops of these stages should be formed of rollers, and the rollers should also be let into the floor of the lorry so that the -container can easily be slid along from the one to the other. We have, of course, an alternative method of lifting the containers by means of tackle and bringing it over the lorry platform by the movement of the, -crane or else by the movement of the lorry itself. In. other cases some device based on the pm' ciple shown in Fig. 4 might be quite useful. Rolling, inclined planes of this kind could be set up in suitable positions in a yard where the goods are collected, the lower ends being below ground level. The lorries • would then be backed up to the position shown, and the packages guided on to the planes and 'moved up by the rotation of a lever at L, perhaps with gear between it and the supporting pulley to make the work lighter.