COUNCIL OF THE PUBLIC . TRANSPORT ASSOCIATION THE Public Transpott 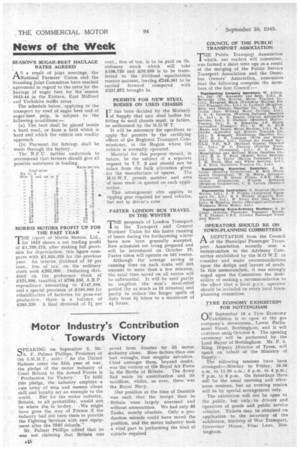 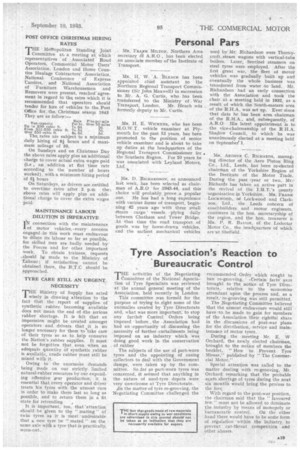 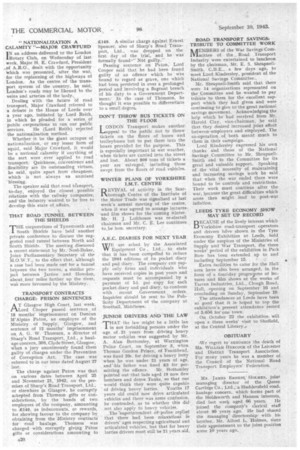 Page 20, 10th September 1943 — COUNCIL OF THE PUBLIC . TRANSPORT ASSOCIATION THE Public Transpott
Close
Noticed an error?
If you've noticed an error in this article please click here to report it so we can fix it.
Keywords : Aldershot & District Traction, Tram, United Kingdom

Association which, our readers ill remember. was formed a short time ago as a result

OPERATORS SHOULD BE ON TOWN-PLANNING COMMITTEES

ADEPUTATION from the Council of the Municipal Passenger Transport Association recently sent a memorandum to the Advisory Committee established by the M.O.W.T to consider and make recommendations upon the design and layout of roads. In this memorandum, it was strongly urged upon the Committee the desirability of making a recommendation to the effect that a local p.s.v. operator should be included on every local townplanning committee.

ON September 16 a Tyre Economy Exhibition is to open at the gas company's showrooms_ Lower Parliament Street, Nottingham, and it will continue until October 9. The opening ceremony will be performed by the Lord Mayor of Nottingham. Mr. P. S. King, Deputy Director of Tyres, will speak on behalf of the Ministry of Supply.

The exhibition will not be open to the public, but only, to drivers and operators of goods and public service vehicles. Tickets may be obtained on application to the secretary of the 'exhibition, Ministry of War Transport, Grosvenor House, Friar Lane, Nottingham. POST OFFICE CHRISTMAS HIRING RATES THE • Mettopolitan Standing Joint Committee at. a meeting at which representatives of -Associated Road Operators, Commercial Motor Users' Association, London and Home Counties Haulage Contractors' Association, National Conference of Express Carriers, and National Association of Furniture. Warehousemen and Removers were present, reached" agreement in regard to the rates .which it is recommended that operators should tender for hire of vehicles to the_ Post Office for the. Christmas season 1943 They are as follow:—

The, rates are subject to a minimum daily hiring of 81 hours and a'. maximum mileage of 50. •

On Sundays and on Christmas Day the above rates apply plus an additional charge to cover actual extra wages paid (Le , an . addition at flat time rate according to the number of hours worked), with a minimum .hiring period of 51 hours

On Saturdays, as drivers are entitled to overtime rates after 2 p.m the above rates will apply plus an additional charge to cover the extra wages paid: MAINTENANCE LABOUR DILUTION IS IMPERATIVE 'IV connection with the maintenance 1 of motor vehicles, .every concern engaged in this work must endeavour to dilute its labour so far as possible, for skilled men are badly needed by the Forces and for other important work. To obtain trainees, requesta should by made to the Ministry of Labour ; if satisfaction cannot be obtained there, the R.T.0 should be approached.

NECESSITY THE Ministry of Supply has acted

wisely in drawing attention to the fact that the report of suppliesof synthetic rubber becoming available does not mean the end of 'the serious rubber shortage. It is felt that an impression might be created amongst operators and drivers that it is no longer necessary for them to.take care of their tyres so as to help conserve the Nation's rubber supplies. It must not be forgotten that even when an adequate quantity Of synthetic rubber is available, crude rubber must still be mixed with it.

Owing to the enormoirs demands being made on our strictly limited natural-rubber resources by our expanding offensive Far production, it is essential that every operator and driver treats his tyres with the utmost care in order to make them last so long as possible, and to return them in a fit state for retreading , It is important, too, that 'attention should be given to the " mating " of twin tyres as it is most undesirable that a new tyre be " mated " on the same axle with a tyre that is practically. worn-out.

Rotary Club, on Wednesday of last week, Major H. E. Crawford, President of A.R.O., dealt with the opportunity 'Which was presented, after the war, for the replanning of the highways of London. As the centre of the transport system of the country, he said, London's roads may be likened to the veins and arteries of the body.,

Dealing with the future of road transport, Major Ciawfurd referred to a debate in the House of Lords over a year ago, initiated by Lord Reith, in which he pleaded for a series, of public corporations to run our public

Whether it be the giant octopus of nationalization, or any lesser form of squid, said Major Crawfurd, it would be a national calamity if anything of the sort were ever applied to road transport. Quickness, cdnvenience and flexibility are its outstanding virtues, he said, quite apart from cheapness, which is not always an unmixed blessiqg.

The speaker said that road tifansport, to-day, enjoyed the closest possible relations with the railway companies, and the industry wanted_ to be free to develop this state of affairs.

THAT ROAD TUNNEL BETWEEN THE SHIELDS

THE corporations of Tynemouth and South Shields have held another private conference to discuss the suggested road tunnel between North and South Shields. The meeting diseussed a recent statement by Mr.' Noel-Baker, Joint Parliamentary Secretary of the M.O.W.T., to the effect that, although a case had been made out for a tunnel between the two towns, a similar pro, ject between Jarrow and Howdon, about, four miles farther up the river, waS more favoured by the Ministry..

AT Glasgow High Court, last week, Lord Cooper passed sentence of 18 months' imprisonment on Dunean M'Alpine Paton, an employee of the Ministry of Supply. Glasgow, and sentence of 12 months' imprisonment on A. G. W. Thomson, a director of Sharp's Road Transport, ,Ltd., a haulage concern, 308, Clyde Street, Glasgow, when a jury unanimously found them guilty of charges under the Prevention of Corruption Act. The case was referred to in our issue dated August 27 last.

The charge against Paton was that on various dates between April 25 and November 21, 1942, on the premises of Sharp's Road Transport, Ltd:, or elsewhere in Glasgow, he corruptly accepted from Thomson gifts or considerations, by the hands of two employees of the company, amounting to £149, as inducements, or rewards, for showing favour to the company by obtaining from the 'Ministry contracts for road haulage. Thomson' was charged with corruptly giving Paton gifts or considerations amounting to £149. A similar charge against Ernest Spencer, also of Sharp's Road 'Transport, Ltd., was dropped on the first day of the trial, and he was formally found," Not &may."

Passing sentence on Paton,. Lord Cooper said that he had been found guilty of an offence which he was bound to regard as grave, one which had been persisted in over a prolonged period and involving a flagrant breach of his duty to a Government Department: In the case of Thomson, he thought it was possible to differentiate to a small degree.

LONDON Transport makes another appeal to the public not to throw tickets on the floors of buses •and trolleybuses but to put them into the boxes provided for the purpose. This is especially important in wet weather, when tickets are carried into the street • and lost. About 800 tons of tickets a year are salvaged,' including those swept from the floors of road vehicles.

REVIVAL of activity in the Scarborough Centre of the Institute of the Motor Trade was signalized at last week's annual meeting of the centre, when it was agreed to arrange lectures sand film shows for the 'coming winter. Mr. H. J. Lofthouse was re-elected chairman and Mr. C. E. Lee continues to be hon. secretary.

A.E.C. DIARIES FOR NEXT YEAR WE are asked by the Associated Equipment Co. Ltd.,. to state that it has been compelled to reduce the 1944 editions of its pocket diary and pad diary. The company can supply only firms and individuals who have received copies in past years and requests must be accompanied by a payment of 1d, per copy for each pocket diary and pad diary, to conform with recent Government orders.. Inquiries' should be sent to the Publicity Department of the company at Southall, Middlesex.

JUNIOR DRIVERS • AND THE LAW THAT the. law might be a little lax

1 in not forbidding persons under the -age, of. 21 years from driving heavy motor vehicles -was suggested by Mr, A. Alan Botton-iley, at Warrington Police Court, on September 3, when Thomas Gordon Prince, of Pearn.head, was fined 20s. for driving a heavy lorry when he was under 21 years of age, and'.his father was fined £3 for per

mitting the offence. Mr. Bottomley pointed out that lads aged 19 now flew bombers and drove Tanks, so that one would think they were quite capable of driving heavy lorries. Youths 11 years old could now drive articulated vehicles and there was some confusion, he contended, as to whether this did not also apply to heavy vehicles,' .The "superintendent of. police. replieal that there had been relaxationS in drivers' ages respecting agricultural and articulated vehicles, but that for heavy lorries drivers must still be 21 years old, ROAD TRANSPORT SAVINGS TRIBUTE TO COMMITTEE WORK

MEMBERS of the War Savings Committee of the Road Transport Industry were entertained to luncheon by the chairman, Mr. E. S. ShrapnellSmith, C.I3.E., a few days ago, to meet Lord Kindersley, president of the National Savings Committee.

Mr. Shrapnell-Smith said that there were 14 organizations represented on the Committee and he wanted to pay tribute to them for the excellent support which they had given and were continuing to give to' the great national savings movement. Acknowledging the help which he had received from Mr. -Harold Clay, vice-chairman, he said that they desired increased joint effort between-employers and employed. The co-operation of both meant much to them in their campaign. .

Lord Kindersley expressed his own thanks and those of the National Savings Committee to Mr. ShrapnellSmith and to the Committee for its great and valuable support. Speaking of the vital necessity of maintaining and increasing savings work he said that when the war ended there were bound to be controls and restrictions. Their work must continue after the war, because the great difficulties which arose then might lead to post-war inflation.

BECAUSE of the lively interest which 'Yorkshire road-transport operators. and drivers have shown in the Tyre Economy Exhibition at Leeds, held under the auspices of the Ministries of Supply and' War Transport, the three weeks' period of the exhibition in Park Row has been extended up to and including September 15.

Extra facilities to cater for the Hull area have also been arranged, in the form of a four:day progragime of lectures and film shows at the works of Tartan Industries, Ltd., Clough Road, Hull, opening on September 16 and concluding on Sunday, September 19.

The attendances at Leeds have been so good that it is hoped to top the exhibition's present attendance record of 5,056 for one town.

On October 22 the exhibition, will open a three weeks' visit to Sheffield, at the Central Library.;

OBITUARY We regret to'announce the death of MR, WILLIAM HERCOCK of the Leicester and District Transport Association. For many years he was a member of the Council of the National Road Transport Employers' Federation.

died last week aged 66 years. He joined the company's clerical staff about 40 years ago. He had shared the managing' directorship with his brother, Mr. Allied L. Holmes, since their appointment to the joint position some 10 years ago,