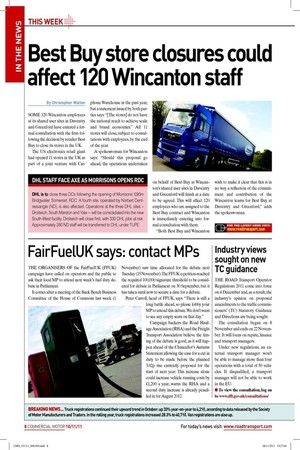 Page 7, 10th November 2011 — FairFuelUK says: contact MPs
Close
Noticed an error?
If you've noticed an error in this article please click here to report it so we can fix it.
Keywords : Road Haulage Association, Debate, Politics

THE ORGANISERS OF the FairFuelUK (FFUK) campaign have called on operators and the public to ask their local MP to attend next week’s fuel duty debate in Parliament.

It comes after a meeting of the Back Bench Business Committee of the House of Commons last week (1 November) saw time allocated for the debate next Tuesday (15 November). The FFUK e-petition reached the required 100,000 signature threshold to be considered for debate in Parliament on 30 September, but it has taken until now to secure a date for a debate.

Peter Carroll, head of FFUK, says: “There is still a long battle ahead, so please lobby your MP to attend this debate. We don’t want to see any empty seats on that day.” Campaign backers the Road Haulage Association (RHA) and the Freight Transport Association believe the timing of the debate is good, as it will happen ahead of the Chancellor’s Autumn Statement allowing the case for a cut in duty to be made before the planned 3.02p rise currently proposed for the start of next year. This increase alone could increase vehicle running costs by £1,200 a year, warns the RHA and a second duty increase is already pencilled in for August 2012.